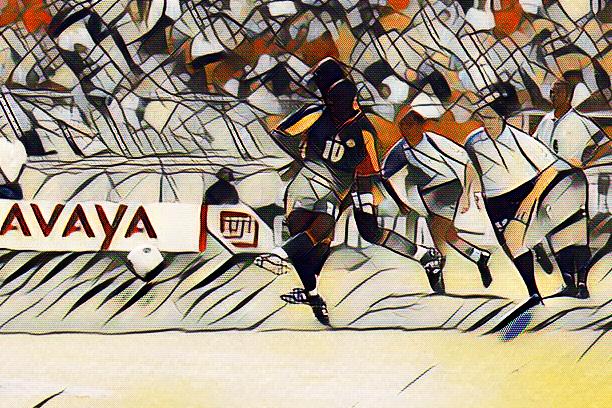 Senegalese football hit new heights in 2002, with their fairytale World Cup campaign surpassing any expectations as they reached the Quarter-Final stage only to be halted by Turkey on the Golden Goal ruling. However that run in the tournament was nearly thrown away when opponents Uruguay almost overturned a three goal deficit in the final Group A game of the tournament in Korea on June 11th.

Heading into the match, Senegal were in a buoyant mood having already produced a shock win over France in the opening game of the tournament thanks to the only goal of the game coming from a young Pape Bouba Diop. The African side followed up with a respectable 1-1 draw against a strong Denmark side featuring Jon Dahl Tomasson, the player whose two goals forced Uruguay to an opening game defeat with La Celeste only mustering a 0-0 draw against ten-man France in their second match.

With first placed Denmark playing a dismal French side in the other final Group A fixture and Uruguay three points behind, Senegal needed at least a draw to guarantee progression into the Round of 16 and could still top the group with a big win. Already playing catchup after their opening fixture defeat to Denmark, Uruguay could still progress via any scoreline win over Senegal to have the chance to overtake them as the criteria meant teams with the same total points, goal difference and goals scored are separated purely by the points gained by the fixture between the two teams.

Over 33,000 spectators gathered at the Suwon World Cup Stadium to witness the tournament sensations Senegal and two-time World Cup winners Uruguay. Referee Jan Wegereef had to brandish three early yellow cards within just 10 minutes to Henri Camara, Omar Daf and Gustavo Varela. A breakthrough in the game saw Wegereef award a controversial penalty to Senegal on 20 minutes after El Hadji Diouf latched onto a poor back pass by Uruguay and dived under no contact by keeper Fabian Carini, with Khalilou Fadiga stepping up and scoring from the spot to make it 1-0.

The 29 minute saw yellow-carded midfielder Camara squared the ball into the path of the in-form Pape Bouba Diop who, after scoring in Senegal’s win over France, finished decisively to add to his winning goal against France. A chance in tactics and personnel saw Uruguay make a first half substitution on 32 minutes, bringing on winger Mario Regueiro to replace centre back Gonzalo Sorondo.

With the yellow card tally at five after just 38 minutes, things went from bad to worse for Uruguay who fell 3-0 behind to another controversial goal through Pape Bouba Diop whose volley off the inside of the bar saw him in a clear offside position after the ball was crossed in his path. Despite a dismal first half, Uruguay couldn’t have asked for a better start to the second half when coach Victor Pua’s half-time substitution saw on-coming Richard Morales score within 20 seconds of the restart after a poor save from Dario Silva’s shot was tapped in from close range.

The pressure on the Senegalese goal mounted and the African side could not do anything about the sweetly struck volley from 25 yards out by one of Pua’s other substitutes in Diego Forlan. The Manchester United forward positioned himself outside the box from a floated Uruguay range free kick and had little time to bring the ball down and volley home from a defensive header towards his path, making the goal even more spectacular.

Whilst the Uruguayan substitutes were making positive impacts to get back into the game, it was a Senegal substitute aiding the opposition further as Habib Beye, who came on for Ferdinand Coly, supposedly bought down Morales in the box on 88 minutes. For complaining, the right back received the game’s eleventh yellow card and the man pulling the strings in midfield, Alvaro Recoba, slotted past Tony Sylva to set up a dramatic finale.

Senegal were hanging on by the skin of their teeth as Forlan raced with minutes to go only to roll his shot inches wide of the target. In injury time, Morales had the golden opportunity to send his nation through to the Round of 16 but he somehow headed a downwards floating ball wide from two yards after some last ditch defending to the hugely relieved African side on a historic day.

2018 FIFA World Cup Russia is only going to be the second appearance made by Senegal at the tournament finals, as they are grouped with Colombia, Japan and Poland and will be hoping to create similar memories, whilst Uruguay share a group with the host nation, Saudi Arabia and Egypt.