Unfortunately, it was draws galore this week in Italy, with five out of eight matches played over the weekend ending a point apiece. On the bright side, there were plenty goals as the title race remains anyone’s guess.

34-year-old Fabio Quagliarella showed there’s life in the old dog yet as the veteran scored a quick-fire double in the first twenty minutes to put Sampdoria 2-0 up. But, some brave first half changes by Cagliari manager, Diego Lopez, saw his side draw level with two in four minutes. Diego Farias and Leonardo Pavoletti the scorers, meaning Cagliari have lost just once in five matches, having lost six out of their previous seven. They stay 14th, whilst Sampdoria stay sixth.

The top two in Serie A faced off in a fiery battle on a cold December evening in Turin. Mario Mandzukic saw his effort saved by Samir Handanovic, before his follow up header was cleared off the line by Inter’s defense. Juan Cuadrado put in a superb display, causing Inter problems all match, and it was his fine cross which Mandzukic headered onto the bar. Inter had a few decent chances, however, in the end the draw was a disappointing but fair result. No change at the top as Inter still lead with Juventus in third, two points behind.

Roberto Inglese missed a golden early opportunity for Chievo, volleying off the bar from six yards following a free-kick. For all Roma were sloppy, this was an impressive performance from Chievo, with goalkeeper Stefano Sorrentino making a superb double save, keeping his side in the game. Roma improved in the second half, but missed some point-blank opportunities to close the gap at the top of the table. It ended goalless, and Roma remain five points off the top with a game in hand.

A combination of missing Lorenzo Insigne, still out with injury, and a general tiredness about the squad, lead to Napoli’s usually fearsome attack drawing blanks against Fiorentina. The worry for Maurizio Sarri is how to re-energise players as their style of play, as well as a long domestic and European season, looks to be taking its toll. Despite dominating chances and possession, they could not find a way through a stubborn Fiorentina side and stay in second place.

It was a good day for the journeymen footballers, as familiar Serie A faces Alessio Cerci and Martin Caceres put Verona 2-0 ahead away from home. But, they will be kicking themselves at the manner of how they let a crucial away victory slip from their grasp. An 86th minute goal by Alberto Paloschi was followed by a penalty just a minute later, which Mirco Antenucci dispatched. An exiting end to a game where both teams really needed to win, as both still sit 18th and 19th.

After last week’s dream point against AC Milan, Benevento were brought crashing down to Earth with a defeat to Udinese. Antonin Barak scored within ten minutes as the brilliantly-named Kevin Lasagna doubled the home side’s lead. Udinese continue their bizarre record of no draws so far this season, with six wins, nine draws and a game in hand leaving them comfortably mid-table in 13th.

Matteo Politano had a fine game as he recorded goal an assist to Eduardo Goldaniga in Sassuolo’s win. His teammates fared not so well, with Francesco Acerbi scoring an own goal and Alessandro Matri missing a penalty. Overall, it was still a positive run for a team trying to put a run of form together and climb the table to a position they belong. At the moment, they sit 15th while Cagliari sit just one point above the relegation zone, in 17th.

A pair of Jacks won it for Milan, as Jack Bonaventura’s double was enough to secure Gennaro Gattuso’s first win as manager. Mattia Destro turned his defender, Matteo Musacchio, to set up Simone Verdi’s fine finish. The away side looked bright and had their chances, but Milan held on unconvincingly for all three points. It means Milan are now seventh while Bologna remain on course for a solid season in ninth. 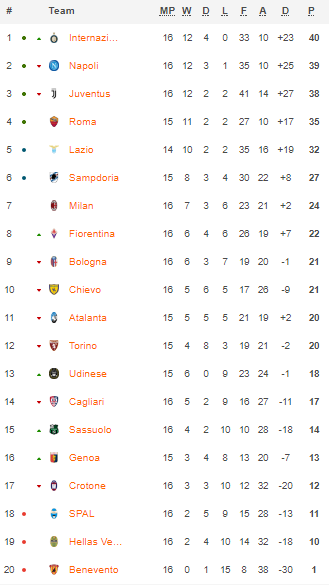