A difficult day for the reigning champions as well as red-card galore in this week’s review of Serie A action.

In a hotly contested derby, Ciro Immobile thought he had opened the scoring before being ruled offside. Diego Perotti then broke the deadlock from the penalty stop after Stephan El Sharaaway was brought down. Radja Nainngollan doubled Roma’s lead with a trademark long-range drive before Immobile also scored from the spot to lead to a nervy finish. Roma held on for a vital derby win keep up the momentum and make it five wins in a row.

Sarri heaped the pressure on counterpart Vincenzo Montella and extended Napoli’s lead at the top of the table after Saturday’s match. Thanks to VAR, Lorenzo Insigne’s run behind the defence and finish stood and opened the scoring. Substitute Pietor Zielinski made it 2-0 before Alessio Romagnoli scored a rare goal in injury time, a volley no less, from long-range. The result means Milan stay in seventh, seven points behind Sampdoria having played one game more.

Luca Rigoni’s header was the only goal as Genoa picked up a vital win in the relegation battle over Crotone. In a fairly even match, Genoa picked up their first win in five games but remain in 18th, one place and one point behind safety. It took Crotone 21 games to reach 12 points last season, this season they sit with the same points already, in 15th place.

Sassuolo also gained three vital points away to Benevento, with former Juventus and Milan man Alessandro Matri scoring early in the second half. Two minutes of madness followed for Benevento as Samuel Armenteros equalised, before Gaetano Letizia was shown a second yellow for a rash challenge. The chaos continued as Domenico Berardi crashed a penalty into the bar in injury time before Federico Peluso scored the winner at the death in the 94th minute and stole the points for Sassuolo. The win moves them up to 16th place on 11 points.

SPAL gained an impressive point at home to Fiorentina, as Alberto Paloschi scored just before half-time. Fiorentina’s rising star Federico Chiesa equalised late on in a game where they dominated largely. However, 70% possession and 20 shots couldn’t give Fiorentina the points even after Marios Oikonomou was sent off for SPAL in injury time. It means the Viola stay in ninth, in the middle of a tight group in the top half of the table.

In perhaps the surprise of the weekend, Sampdoria were 3-0 up against the Old Lady thanks to a poor defensive performance and goals from Duvan Zapata, Lucas Torreira and Gianmarco Ferrari. Gonzalo Higuain’s penalty and Paolo Dybala’s fine solo goal threatened a very late comeback, but Sampdoria hung on for the win. Sampdoria now move to within two points of Lazio in fifth place and have a winnable game against Bologna next. Meanwhile, Juventus lost further ground in the title race and are now four points behind unbeaten Napoli.

From most surprising to now least surprising result this week, Torino and Chievo proved how similar their respective seasons are as they shared the points in an evenly-matched game, and stay within one point of each other in mid-table. Perparim Hetemaj and Daniele Baselli popped up with the early goals and Andrea Belotti had a penalty saved, as the theme of red-cards continued this week with Ivan Radovanovic’s straight card late on.

In yet another finely-poised match of few chances, Joao Pedro’s fourth goal of the season clinched it for Cagliari, only their second away win against Udinese in 23 meetings. In stoppage time there was, you guessed it, another red card, for Udinese goalkeeper Albano Blizzarri. Calgiari now leapfrog their opponents into 12th place, however, Udinese also have a game in hand.

In the day’s late kick-off, a Mauro Icardi double saw off Atalanta and put Inter in second place, above Juventus. The points were more or less wrapped up after Icardi’s second, an hour into the game, and despite Atalanta having even possession and having the same amount of shots (8), they were limited to just one on target. Sadly, there were no red cards to report. 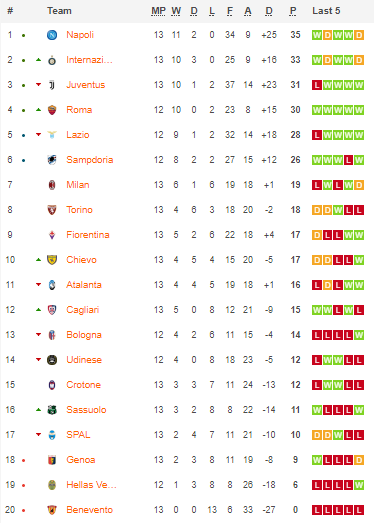