Not as many red cards compared to last week, but it’s quality over quantity in terms of sending offs this week, particularly in Roma’s game. There are also mixed fortunes for the top six as some clubs near the bottom of the table start to pick up some momentum in week 14 of the Serie A season. Looking ahead to matchday 15, why not check out the Unibet Live Casino and see what you can win?

Simone Verdi’s tap-in in the third minute set Bologna on their way to their sixth win of the season. Ibrahima Mbaye scored the second and despite Vasilis Torosidis’ red card on the stoke of half time, Orji Okwonko wrapped up the points four minutes after coming on as a substitute. Bologna now sit an impressive eight, and extend their unbeaten run at home against Sampdoria in the league, their last loss came in November 2003.

After starting the season brightly, SPAL drop into the relegation zone for the first time after winning just one of their last 12 games. Their latest defeat came at the hands of Chievo, with a Roberto Inglese double downing the away side after they took the lead through a Bostjan Cesar own goal. SPAL will take positives from an evenly matched game though, having more shots and shots on target than the home side. They will have to be a lot more clinical in their next game, an away trip to Roma.

Sassuolo ‘keeper Andrea Consigli provided some first-half heroics to keep the scores level, but was powerless to stop former Manchester City youngster, Bruno Zuculini, firing home from close range. Sassuolo’s defence failed to learn their lesson after several balls in behind, and Daniele Verdi finally latched onto one and finished, with the home side’s defence looking worryingly slow. The only downside for Verona was Thomas Heurtaux’s red card, regardless, an important win lifts them to nine points but still sit 19th.

The ever-impressive Mauro Icardi moved to 15 goals in 14 games for Inter as his brace helped them win 3-1 over Cagliari. Icardi and Marcelo Brozovic gave the hosts a two-goal lead, but Cagliari looked bright and had some good chances, with a beautiful cross and volley from Leonardo Pavoletti offering some hope at 2-1. Icardi’s second killed the game however, keeping them just two points behind leaders Napoli, while Cagliari remain in mid-table in 13th place.

Genoa continued to turn around their form, following on from last week’s win with an impressive draw this week against Roma. Stephan El Shaarawy’s smart finish opened the scoring, before Daniele De Rossi’s inexplicable red card for slapping Gianluca Lapadula during a corner. Lapadula was in the action again for Genoa, levelling the game from the penalty spot. The game ended even, with Roma losing ground in the title race and sit fourth, while Genoa continue to improve and now sit above the relegation zone in 17th.

Despite ending goalless, Milan and Torino’s draw was anything but boring. Despite having 17 shots and many clear-cut chances, Montella’s side simply couldn’t put the ball in the back of the net, with both Andre Silva and Nikola Kalinic squandering glorious opportunities. Gianluigi Donnarumma made some impressive saves late-on to deny Sinisa Mihajlovic nicking a victory against his old side. Milan stutter again and stay in seventh, Torino are only one point but three places behind in tenth.

Usually a free scoring side, Napoli could only manage the one goal as they battled to victory over an organised Udinese side. One was enough however, as Jorginho’s penalty was initially saved by Simone Scuffet, but the midfielder tapped in the rebound. The result was never in too much doubt after that, and Napoli dominated the possession with 67%. The most interesting stat to come out of this result is that Dries Mertens has failed to score for three games in a row for the first time in over a year (November 2016).

Lazio were on course for a victory against Fiorentina after Stefan de Vrij’s 25th minute opener. However, La Viola are partial to a late equaliser and Khouma Babacar provided one in the 94th minute, after a controversial penalty was awarded via VAR for what looked like a soft challenge. The result was points shared and a minor setback to Lazio’s chase for the Champions League as they sit two points behind rivals, Roma, in fifth.

The score is perhaps deceiving in this match as Crotone did very well in the first half to contain and frustrate Juventus at their home ground. However, as is often the way with the reigning champions, their relentlessness paid as Mario Mandzukic opened the scoring early in the second half. Unlikely goalscorers Mattia De Sciglio and Mehdi Benatia rounded off a hard-fought performance. Plucky Crotone are 15th as the Old Lady stay in third. 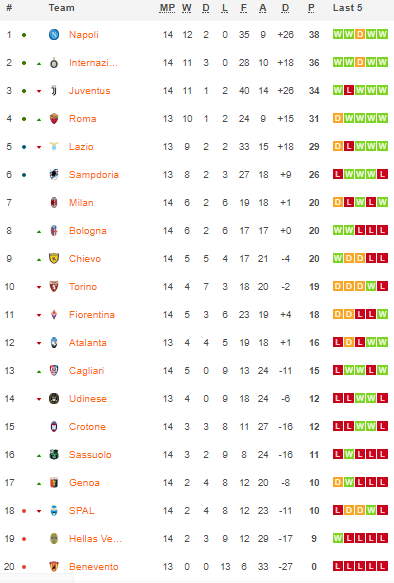