As Italian football waves goodbye for the winter break, it gives us a few parting presents before leaving for two weeks. Benevento pull off another shock, Lazio and SPAL’s seven-goal thriller and Walter Mazzarri – he’s back!

Fresh after dominating December’s Serie A Team of the Month, Massimo Oddo’s impressive Udinese side extended their unbeaten run to six games with a point on the road against Chievo. The home side had the better quality chances in an even game, with six shots on target to Udinese’s one. But, Rolando Maran’s side were their own worst enemy, with Nenad Tomovic’s own goal cancelling out Ivan Radovanovic’s opener.

While still premature to say Inter’s title challenge has capitulated, it has certainly taken another big blow after this week’s draw to Fiorentina. Mauro Icardi opened the scoring before the hour mark, however, Fiorentina’s fans were as impressive as their attacking efforts, as they deservedly found a late equaliser with Giovanni Simeone’s goal in stoppage time. Inter coach, Luciano Spalletti, blamed the lack of squad depth, particularly in midfield, as a factor in their poor form over the festive period. In the end, his side now sit nine points off the top and are winless in five.

The ever-passionate Walter Mazzari has had an impressive week since returning to Serie A management. Despite being without Andrea Belotti and having just 48 hours to prepare since taking the helm at Torino, he guided them to a comfortable victory over Bologna. M’Baye Niang helped his former coach at Watford, scoring either side of Lorenzo De Silvestri and Iago Falque in a match where they, in truth, dominated. This was Torino’s first win in four, and are remarkably tied in 10th with four other teams on 28 points.

Everyone’s favourite disaster-turned-fairytale story, Benevento, continued their turnaround in form with back-to-back victories, this time over high-flying Sampdoria. Drawing 1-1, in the 82nd minute, Sampdoria’s Jacopo Sala was sent off, with the home side scoring in the 84th and 91st minute through Massimo Coda and Enrico Brignola. Samp’s Dawid Kownacki pulled one back at the death, but Benevento hung on to claim a well-deserved three points and are now just eight from safety. Easy.

With both sides 14th and 15th in the table, this was always going to be a tense, close game. With near-equal possession and not much between the shot-count, Sassuolo went closest with Alessandro Matri’s header hitting the post. It was another header five minutes later, this time from Andrej Galabinov, which won the match in the 80th minute. The win means the two sides swap positions in the table, both now sitting on 21 points.

With two goals disallowed, one for offside and one for a foul, AC Milan were relieved to finally open the scoring against Crotone with a Leonardo Bonucci header. ‘Header’ is a loose term for the goal, Crotone ‘keeper Alex Cordaz, who had an excellent game until this point, missed the ball when attempting to punch from a corner, with the ball hitting Bonucci and ending up in the net. Still, Milan grind out another gritty if not pretty performance, climbing to 10th with Crotone staying in the relegation zone, in 18th.

Napoli’s dream of a first Scudetto post-Maradona continues into 2018 with a 2-0 win over Verona. Kalidou Koulibaly, consistently linked to the Premier League, proved his worth in the Serie A title race with a header just after the hour mark. The familiar names of Lorenzo Insigne and Jose Callejon linked up, with the latter finishing to round off a comfortable win. 71% possession, 24 shots, 2 goals, 1 point ahead at the top. Job done.

Occasionally, players can looked tired or jaded around the festive period, too much turkey at Christmas, or prosciutto more likely. Ciro Immobile is not one of those players. He scored FOUR goals of his side’s five in this week’s star game as Lazio picked up an away win to struggling SPAL. The game was determined to have everything you could ask for, a goal in the first five minutes, a penalty to level the scoring a minute later, and a 22-minute hattrick. No red cards and ‘only’ one goal in the second half were the only factors which took away from this being the most hectic game of the season. Lazio now replace Roma in the top four as SPAL still linger one place above the relegation zone on goal difference.

With Serie A well and truly up for grabs this year, Roma and Inter seem to be trying their very best not to win it. A home loss to an impressive Atalanta side all but killed dreams of bringing the Scudetto to the capital. Marten de Roon had an eventful afternoon, scoring Atalanta’s second after Andreas Cornelius’ opener, before picking up his second yellow on the stroke of half-time for a bad tackle. Last season’s main man Edin Dzeko pulled one back for Roma but they ran out of gas late on, despite controlling much of the play. They drop to fifth as Atalanta move up to eighth.

Federico Bernardeschi scored the only goal in a game which will be remembered for the wrong reasons. Blaise Matuidi has spoken out, saying he suffered racial abuse for the second time in as many weeks in Serie A football. The midfielder took to social media to say he will not stay quiet about the issue, raising the question as to what steps the Italian federation will take to finally eliminate the issue which continues to rear its ugly head in football. In terms of the outcome of the match, Juventus stay second as Cagliari drop to 16th. 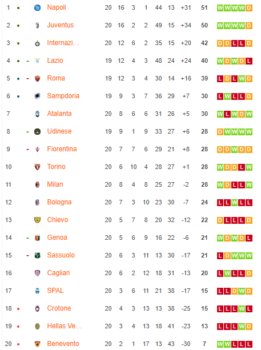