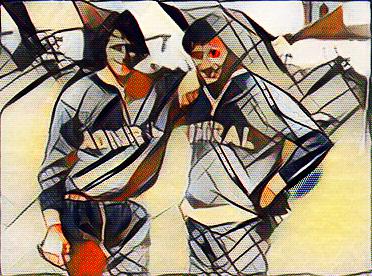 Heading in to the 2018 World Cup in Russia, England manager Gareth Southgate has a wealth of talented goalkeepers to call on for his final squad; Jack Butland, Joe Hart, Jordan Pickford, Nick Pope and Tom Heaton, amongst others, are viable options between the sticks.

Southgate’s selection headache, though, is nothing like the decision England’s managers in the 1970s and 1980s (namely: Sir Alf Ramsey, Don Revie, Ron Greenwood and Sir Bobby Robson) had to make.

During this period, England possessed arguably the two best goalkeepers in the world: Peter Shilton of Nottingham Forest, and Ray Clemence of Liverpool. Both won a host of domestic, and European, honours for their clubs; it was near impossible to choose between them. It should also be noted that Manchester City’s Joe Corrigan was another option, who, had he played today, would surely have earned more than just nine caps.

What made Shilton and Clemence’s rivalry so compelling is that they were more different than they were similar. Clemence was a pioneer; he was one of the first goalkeepers happy to come off his line and act as a sweeper behind the back four that English football witnessed. Shilton, though, was often rooted to his line, but he was one of the finest shot-stoppers of his generation. As a result, there was a friendly rivalry between the pair.

Shilton made his England debut in 1970 in a 3-1 friendly win against East Germany under Ramsey, whilst still a Second Division player at Leicester City. Four years after England’s sole World Cup triumph, on home soil in 1966, Shilton was regarded as third-choice goalkeeper behind Gordon Banks and Peter Bonetti.

Banks was forced to retire from elite-level football in 1972 after a car crash severely damaged his eyesight;  Bonetti had been cast aside by Ramsey, meaning Clemence and Banks were two keepers battling for the number one jersey after the former made his debut against Wales in a friendly 1973 –  the rivalry was born.

In 1973, with England chasing World Cup qualification for the tournament in West Germany, Shilton was chosen by Ramsey as number one. Clean sheets, and victories, against rivals Northern Ireland, Wales and Scotland preceded a damning 2-0 loss to Poland in Chorzow. Victory against the same opponents four months later in the final round of qualification matches was a necessity if Ramsey’s England were to qualify.

Shilton was selected for the all-important tie ahead of Clemence. He spent most of the match watching Poland goalkeeper Jan Tomaszewksi make save, after save, after save, denying England’s forwards. When he was eventually called into action, he was found wanting.

Grzegorz Lato dispossessed Norman Hunter and found Jan Domarksi. His first-time shot towards Shilton’s near post looked easy for the Foxes keeper to gather, but it somehow squirmed underneath him to shock the Wembley Stadium crowd into silence – Poland were ahead.

Greenwood had a solution to England’s goalkeeping selection headache – he decided to alternate Shilton and Clemence. Ahead of the 1982 World Cup in Spain, the two shot-stoppers played in half of the qualifying matches each. Shilton played in a 1-0 victory against Hungary that England had to win to qualify for the tournament on a night that threatened to mirror the events at Wembley against Poland almost a decade previous.

Clemence was chosen for all of England’s warm-up matches leading up to the main event, but it was Shilton that was picked for the Three Lions’ opening fixture against France in Bilbao. He then remained in goal for the rest of the competition, which saw England eliminated from the second round.

Shortly after, Clemence was forced to retire from international football after a serious knee injury. He played in over 1,000 domestic games, and was the first goalkeeper to captain England after Frank Swift, but he earned a relatively small 61 international caps.

Shilton, though, became the undisputed number one in Clemence’s absence. He featured in the 1986 and 1990 World Cups, in which England were eliminated against Argentina, and then West Germany, in – needless to say – dramatic circumstances. He still holds England’s appearance record to this day with 125 caps.

Perhaps he would have earned even more if it was not for the brilliance of Clemence, and even Corrigan, who amassed almost 500 appearances for Manchester City. In any other era, both Clemence and Shilton would surely have been regarded as one of the best goalkeepers around. Instead, they were at times inseparable. And still, so they claimed, they were the best of friends.