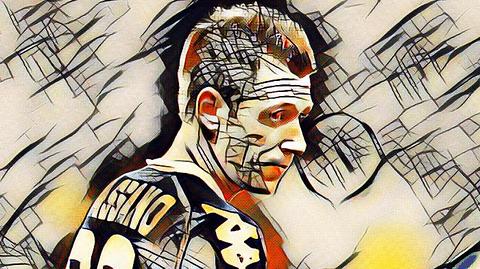 Any fans of Italian football will know that Antonio Cassano is the epitome of ‘what could have been’. Incredible potential which turned into a career of controversy and indulgence. Just this week, Cassano signed for Hellas Verona, his eighth professional club, before planning to announce his retirement days later. Determined to go one better, Cassano then changed his mind two hours later, announcing at a press conference his decision was a ‘moment of weakness’ and that he was excited to have a ‘fun season’ with Verona. So how did the diminutive forward with massive potential go from the most expensive teenager of all time to wasted journeyman?

Born in Bari, just a day after Italy won 1982 World Cup, Antonio Cassano came from a poor background after his father left the family when Antonio was still a young boy. He found solace playing street football, a hobby which became a lifeline to escape from poverty after he was picked up by a Bari scout. Cassano impressed in Bari’s youth team, and was promoted to the first team in 1999.

Just a week after his senior debut, 17-year-old Cassano scored a wonder goal against giants Inter Milan. Skillfully controlling a long ball, he then managed the small feat of bamboozling both Christian Panucci (Champions League Winner) and Laurent Blanc (World Cup Winner), before finishing calmly. The arrogance and flair of the goal went on to sum up Cassano’s career and personality, and arguably his downfall. That goal, as well as several impressive performances, built up Cassano’s reputation as one of the most promising young stars in Italy, endearing himself to fans as ‘Il Gioiello di Bari Vecchia’, The Jewel of Old Bari.

When the time came for Cassano to move on, he did so impressively. In 2001, he signed for Roma for 60 billion lire, the equivalent of €30 million, and became the most expensive teenager ever. When he wanted to, Cassano linked beautifully with Francesco Totti in flowing attacking moves. However, the key part of that sentence was ‘when he wanted to’, as Cassano spent most of his time arguing with manager, Fabio Capello. This was the start of a long, long list of arguments Cassano would have with Capello and various others over the years. In 2006, he left after a row over a new contract with then-manager Luciano Spalletti. In the end, he left for Real Madrid for €5 million, a fraction of what he arrived at Roma for.

It is fair to say Cassano enjoyed his younger years, indulging himself in ‘La dolce vita’ and claiming to have slept with over 600 women, whilst eating whatever was put in front of him. Obviously, such a lifestyle had effects of his body, leading to Madrid fining him for every gramme overweight he was.

At Madrid, the Cassano/Capello saga continued, and after a quiet couple of years Antonio was back to his controversial best, including being suspended due to ‘disrespect’ after being dropped from a league game. During his time at the Spanish capital, Cassano would thoughtfully take time out of his busy schedule to regularly swear and argue with Capello. In 2007, after scoring just two goals, he left for Sampdoria. Real Madrid President, Ramon Calderon, described Cassano’s attitude at the time as ‘unsustainable’.

Sampdoria was supposed to be a fresh start, however, in his first season he was sent off and threw his shirt at the referee, leading to a five-match ban. Classic Antonio. To his credit, in his second season Cassano seemed calmer, now in his mid-twenties, he had perhaps matured. By this point, Bari’s jewel was supposed to be a shining diamond for Italy. He formed a powerful partnership with Giampaolo Pazzini, scoring 12 goals and assisting 15.

In his third season, Cassano briefly led ‘I Blucerchiati’ as vice-captain to first in Serie A. However, after a poor second half of the season they finished mid-table and Cassano was dropped for most games. After falling out spectacularly with Sampdoria’s chairman in 2010 over attending an awards ceremony, he was promptly sold to AC Milan.

At Milan, Cassano linked up again with Pazzini but found limited playing time due to talents in front of him including Zlatan Ibrahimović and Alexandre Pato. In October 2011, after a match against Roma, Cassano complained of breathing and speech difficulties. He suffered a minor stroke and doctors discovered a heart defect, which operated on successfully and only kept him out of action for six months.

Anyone else would perhaps take the hint to change their lifestyle after serious health problems, but not our Antonio. By this point he was married, but was still overweight which transcended to his game, clearly losing an element of pace.

At Euro 2012, Cassano found more trouble as he made comments including that he would ‘prefer no gay men’ in the national team. An obligatory apology followed as well as a fine, but he stayed in the squad as Italy reached the final.

After mixed fortunes at Milan, Cassano was on the road again, this time to rivals Inter. Despite the club struggling to ninth, he scored nine goals and 15 assists in 39 games during his tenure, and even managed to stay out of trouble.

After yet another fresh start at Parma, Cassano finally made an effort to get back in shape and regain some pace he had lost and would continue to lose as he reached his thirties. He lost 10kg as he became a key player for Parma, helping them to European qualification. An impressive record of 12 goals and eight assists in 2013-14, before financial problems crippled the club in 2015, and all but forced Cassano to leave.

A return to Sampdoria followed, but after an unsuccessful 2016-17 season, leading to him being dropped to the reserves and training with the youth goalkeeper, Cassano left again. Now, as we reach the final chapter of the story, Antonio arrives at Hellas Verona. After initially suggesting he would retire as he missed his family, fortunately, Cassano has now changed his mind, providing the rest of us with one more season of entertainment before he retires. We’ll definitely miss him.