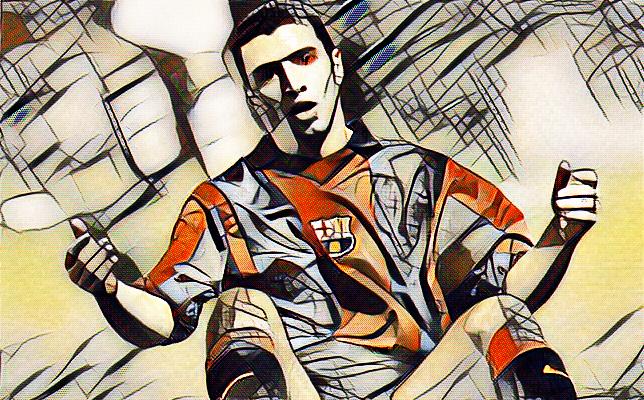 Simão Sabrosa, known mononymously as Simão, is a lesser-remembered, though unbelievably talented, wide forward that at times dazzled La Liga full-backs with his daring and direct wing play. Unfortunately, because of Louis van Gaal, his talents were somewhat restrained during his formative years and football fans were rarely treated to his true ability.

A product of the Sporting CP academy, Simão made his debut after Luís Figo had left to make his mark on European football, but before Cristiano Ronaldo arrived on the scene. It was clear, then, that during the twilight of the 20th century, and the beginning of the next, that there were some exciting young forwards coming through – though unfortunately for Simão, he failed to reach the dizzying heights of his aforementioned compatriots.

It all started so well. He made his Sporting CP first-team debut against Gil Vicente at the age of 17; he marked the occasion by scoring in an emphatic 3-0 victory. He played 60 games in his first two seasons as a professional footballer – it was not long before Europe’s elite were to come calling.

And soon enough, they did; though, it could be argued that Simão’s choice of move, to the glitz and glam of Barcelona, stalled his development at one of the most important stages of his career.  At the age of 19, he arrived at the Camp Nou for a fee of €10 million but was immediately sidelined by manager van Gaal. The Dutchman endured a turbulent relationship with the Barcelonistas for much of his time at the Catalan giants, as he tried to impress his football philosophies after taking over from the great Sir Bobby Robson.

Despite winning the 1997-98 and 1998-99 La Liga titles in his first two seasons as manager, van Gaal’s distrust of flair players, or often blatant refusal to even select them, disappointed the fans, and also the media. Van Gaal insisted on using Rivaldo, who was awarded the FIFA World Player of the Year and Ballon d’Or in 1999, out of position as a left winger. Not only did Rivaldo suffer as a result, which led to a public dispute with van Gaal, but it meant that Simão was relegated to the bench.

Van Gaal was sacked in 2000 but it was not enough to convince Simão to continue playing for the Blaugrana. Instead, he opted for a move back to his homeland, Portugal, and joined Sporting CP’s Lisbon rivals SL Benfica.

He quickly became one of the Encarnados’ most important players; during his six years back in the Primeira Liga, from a wide-left position he failed to reach double digits on the goal charts only once and scored an impressive 18 goals during 2002-03.

The following season, he scored Benfica’s winning goal in 2-1 extra-time victory against FC Porto in the Taça de Portugal final; his goal sealed the Encarnados’ first trophy in eight years. The 2004-05 season saw Benfica win the Primeira Liga, for the first time in 11 attempts; Simão played every minute of the league campaign and scored 15 goals.

Once again, Simão’s form in Portugal sparked interest across Europe. After rejecting offers from Manchester United and Liverpool, Simão once again embarked on a mission to conquer Spanish football by signing for Atlético Madrid for a fee of €20 million.

During his first three seasons back in La Liga he played over 30 league games apiece and was an undisputed starter. In the summer of 2009, he was appointed as one of Atléti’s club captains by manager Abel Resino.

The decision to appoint Simão came about as a result of a re-shuffle from Resino in the hope of kick-starting Atléti’s fortunes. The Colchoneros largely underachieved in Simão’s first two seasons back in Spain; two fourth-placed finishes and poor showings on the European stage meant that major changes were needed at the Vicente Calderon.

Resino’s plan worked; the 2009-10 season was a hugely successful campaign for Atlético, and from a personal point of view, Simão shone on the wing. He scored a crucial away goal against APOEL FC which secured a spot in the season’s UEFA Europa League – a competition that Atléti went on to win, after beating Fulham 4-1 in the final. Simão scored against Galatasaray en-route to their success.

He continued his rich vein of form into the 2010-11 season. He scored three goals in the first seven La Liga fixtures and captained Atléti to a 2-0 UEFA Super Cup victory against the might of Inter Milan. Simão set up Sergio Agüero’s late finish in an impressive win.

However, because of niggling injuries and the inability to pose the physical, speedy threat that once made him almost unplayable at times, Simão once again left La Liga to join Beşiktaş. An uninspiring 18 months followed, and although he did play his part in a Turkish Cup victory, Simão was a shadow of the player he was only a season previous. He did return to La Liga once again, to join RCD Espanyol on a free transfer in 2012, but having reached his mid-thirties, he failed to impress despite featuring regularly. A sole appearance for NorthEast United in the Indian Super League in 2015 subsequently followed.

After leaving Sporting CP, he had the world at his feet, but sadly for him, the choice to move to Barcelona sadly damaged a potentially glittering career almost just after it had begun. A successful spell at Benfica set up a treasured four-season spell as one of Atlético’s star players, but six trophies at the end of a career that lasted nearly two decades fail to portray Simão’s true talent.

He managed 85 caps for the Portuguese national side. He appeared at two World Cups, and two European Championships, but owing to the brilliance of Figo, Ronaldo, and even fellow former Sporting CP talent Nani, Simão rarely had the chance to take centre stage. In the pantheon of supremely-talented wingers to have come through the Lisbon production line, Simão is often the one that is underappreciated. But, had things gone his way, he could now be talked about as one of the greats.