The SoccerEx Football Finance 100 findings have been revealed. The annual study looks at the economic power of football clubs, with a focus on a more modern outlook – taking into account assets, net debt and the amount of investment owners could make into their club.

Manchester City topped the global rankings, with their runaway campaign towards the Premier League title showing no signs of letting up, and the purchases of various football clubs across the globe by the City Football Group expanding Sheik Mansour’s lofty ambitions.

According to the Football Finance Index (FFI), Manchester City hold a score of 4.883 with playing assets, fixed assets, money in the bank, potential owner investment and net debt all taken into consideration.

But how did France’s top teams perform?

Having been pipped to second place unexpectedly by Arsenal, Paris Saint-Germain are only third. Unai Emery’s side, similar to Manchester City, look set to stroll to the league title in France’s top league and hold just as much financial firepower.

PSG’s score of 4.128 underlines the newfound pulling power the club have, shown in the transfers of Kylian Mbappe and Neymar from the summer. The Brazilian’s switch to Ligue 1 smashed the transfer record, in a £200 million plus deal. Qatar Sports Investment, the owners of France’s top team, holds enough in capital to be considered a country in itself, a stark example of the money in modern football. Whilst transfer fees such as Neymar’s aren’t the norm, this may well change in the future as PSG continue to expand their projects.

The Football Finance report also breaks down the money that the club holds into categories:

Olympique Lyonnais rank 18th in the list, with a score of 1.210. Since their complete overhaul in 1999, Lyon have progressed to one of France’s most exciting attacking teams. Their high-scoring exploits has seen Bruno Genesio’s side move up to third place, level on points with Monaco before the winter break.

After recovering from the global banking crisis of 2008/09, Lyon have gone on to build a new stadium and are winning over both pundits and neutrals after some breathtaking displays from the likes of Nabil Fekir, Mariano and Memphis Depay so far this season. The figures from the SoccerEx report show that while Lyon don’t possess as much capital as other football clubs, the effective way that the club has been run allows room for growth in the future:

AS Monaco are the club most likely to battle with Lyon for the last automatic Champions League qualifying place come the end of the season, and they too feature on the report, in 19th place.

Leonardo Jardim’s team have gone from strength to strength over the last few years, after substantial investment into the club in 2011. With a mix of talented youth and the ability to sell on players for large sums, Monaco have used their profit to bring in players who have taken to Ligue 1 football well. Reaching the Champions League semi-finals in 2016/17 remains to be the club’s biggest recent achievement, along with their triumph in Ligue 1 last season, and Monaco’s future appears to be bright. However, this could depend on the club continuing their youth development in the same vain that has lead to the recent nurturing of several talented prospects, and ensuring money is spent on players that will fit Jardim’s system.

To access the full SoccerEx report, head to this link: http://mysoccerex.com/Soccerex_Football_Finance_100_2018.pdf 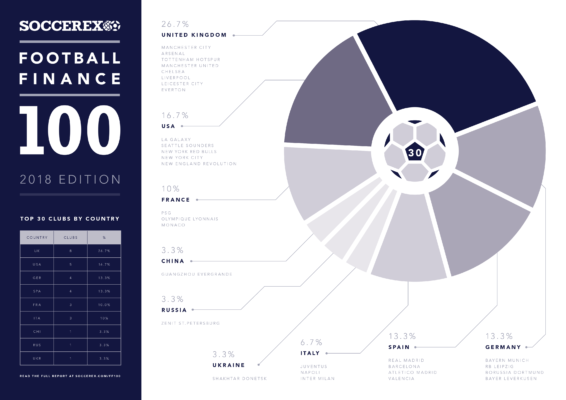