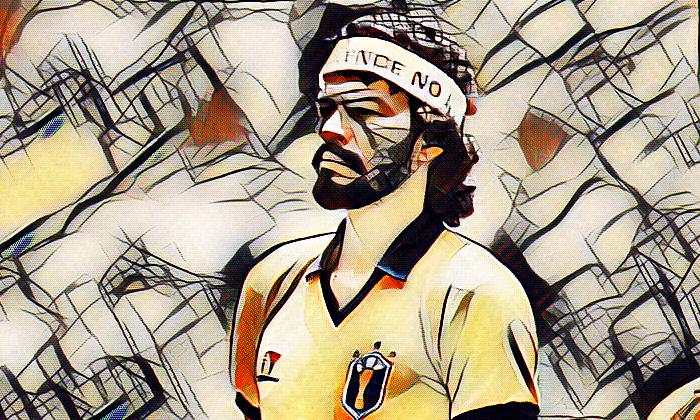 There are many iconic World Cup images; Bobby Moore and Pele embracing after the England and Brazil game in Mexico, 1970, Diego Maradona’s ‘Hand of God’ goal in 1986 and Marco Tardelli’s passionate celebration after his goal for Italy against West Germany in 1982. For many the image of headband-wearing, bearded, Brazilian midfielder, Sócrates, in that clean, stylish, yellow shirt is one which brings back fond memories.

He was a member of the Brazil team at the 1982 and 1986 World Cups and it’s hard to argue with popular opinion that, particularly the 1982 squad, was along with the Holland team of 1974, the best team never to win a World Cup. Their style of free-flowing, attacking football, with a huge helping of flair and grace belied the functional, almost European style with which the Brazil teams of 1994 and 2002 won the competition. Socrates was more than a part of those great Brazil teams along with Zico, Careca and Falcão, he was also a large political presence in his homeland, particularly campaigning against the military dictatorship of the time.

Sócrates had a fortunate start to life, whereas many children in Brazil were, and still are, born into poverty and had little education; Sócrates was born into a middle-class family and made use of the political and sociological literature at his fingertips in his father’s library.

He split most of his playing career between Botafogo and Corinthians and it was at the latter club where he made his name after he signed for them in 1978. He played a deep-lying midfield role and had incredible technique and vision. His languid and pedestrian style was completely at odds with his technical and mental ability; he was able to pick out a pass with either foot and could also hit a ferocious shot. A 1980’s Andrea Pirlo, if you will.

As his reputation grew he came to represent the more romantic side of the game; a thinking man’s footballer of grace and intelligence. His interest in politics, particularly left-wing politics, part educated and part self-educated would also form a large portion of his legacy. After he won his first league title at Corinthians in 1979 he co-founded the Corinthians Democracy. The aim was to make the team a co-operative where everyone, from the coaching staff, the ground staff and the doctors were given a say on how the club was organised. He wasn’t afraid to be outspoken and he and his teammates supported the rights of workers and of the introduction of presidential elections in Brazil, defying the military regime, led by Joao Figueiredo. During Sócrates’ time with Corinthians the club didn’t have a shirt sponsor, instead, they wore slogans on their shirts which supported their political views and one slogan simply read ‘democracia’.

He was also a heavy smoker and drinker and ironically, given his lifestyle, he completed a bachelor’s degree in medicine while playing professionally. This gave birth to his nickname ‘The Doctor’. It can certainly be argued he didn’t practise what he preached in his medical studies.

During the build up to the 1982 World Cup he again won the Brazilian title with Corinthians, preparations for the tournament saw the national team play over 30 games, they lost just two while scoring an average of 2.5 goals per game. Sócrates later referred to their style as “organised chaos” but he was doing him and his teammates a huge disservice as they were anything but. Their quick and decisive play saw them head into the tournament full of confidence. On a personal level his training regime for the finals saw him become leaner and stronger as he cut down on cigarettes and alcohol for a time. It was clear to see he was determined to bring his Brazil team out of the shadow of the famous World Cup-winning side of 1970.

His team took the field against the Soviet Union on 14 June; the Soviets had reason to be hopeful as they were one of the two teams who beat Brazil during their World Cup preparations. Although Brazil won, 2-1, they were fortunate to do so. Sócrates later described the Soviet team as a “red wall” and they were denied a clear second-half penalty. For the man himself, the game is best remembered for his goal. He skipped one sliding tackle, dropped a shoulder inside to evade another opponent and in the open space he thundered a 25 yard shot past the Soviet goalkeeper, Rinat Dasayev. Sócrates later described the goal as feeling like an “endless orgasm”.

They progressed through the tournament and looked like they would win it at a canter after beating Scotland, 4-1, and New Zealand, 4-0. In the second group stage they met old foes, Argentina, and a resurgent Italy team in a mouth-watering group of death. Italy had Paolo Rossi back in the squad after he returned from suspension for his role in a 1980 betting scandal and fired a hattrick in a 3-2 win as the two teams produced one of the all time classic World Cup games. Sócrates equalised Rossi’s opener after playing a neat one two and smashing past Dino Zoff at his near post, an almost majestic cloud of touchline chalk rises as his shot crosses the goal line. However, Italy won out despite Falcão putting the South American’s ahead midway through the second half.

It must be remembered that Brazil only needed a draw to qualify for the Semi Final; moreover they knew they would be eliminated with a defeat. Arguably a wiser move may have been to defend their advantage against Italy, however, this was Brazil and in particular the early 1980s Brazil where they played simply to outscore the opposition, no matter how many they conceded and no matter what was at stake.

Sócrates’ status grew over the next four years and although his career was winding down when he represented Brazil in Mexico in 1986 he was still arguably their most influential player. He was very aware of the media attention he would receive, not only for his on-field ability but also for his political views. Guaranteed maximum exposure he lined up for the national anthem before each game wearing a headband with a political message written on it. Before their first game against Spain on 1 June, his headband read “Mexico, stand tall” in reference to the 1985 earthquake in Mexico City which resulted in the deaths of over 5000 people. Prior to their second game versus Algeria it read “yes to love, no to terror” This is a message which transcends any race, culture or time in history and was believed to be in response to the US military bombing of Libya. It’s fair to say this kind of political statement would never be allowed now; one only has to think back to the furore around British teams wearing the poppy to see how much the game has changed since 1986.

On the field, Sócrates scored the only goal of the game against Spain and they moved into the knockout stages with three wins out of three. Poland were dispatched, 4-0, in the last 16; Sócrates scored a penalty in that game. The Quarter Final against France went to a penalty shootout after finishing 1-1. Sócrates missed his penalty and Brazil lost 4-3, however it is widely regarded to be one of the games of the tournament as then European champions, France, with Michel Platini, Jean Tigana and Alain Giresse, made the Semi Final in Mexico. Brazil would have to wait another 16 years before lifting the World Cup again in Japan and South Korea in 2002. That 1986 penalty shootout was Sócrates last action for Brazil and he never won any major honours with the national team, something his younger brother, Rai, did in 1994.

Sócrates has never hidden his political affiliations, he once named John Lennon, Fidel Castro and Che Guevara as his heroes (he even named one of his sons Fidel). During the Corinthians Democracy times of the early 1980s he stood in Sao Paulo’s Cathedral Square in front of an estimated 2 million people and declared if presidential elections were not introduced he would end his career with Corinthians and move to Italy. This may seem unbelievably pretentious but such was Sócrates’ standing with the Brazilian people it wasn’t too outlandish to think political reform could be achieved in this way. Inevitably things didn’t change and he kept his word by moving to Fiorentina for the 1985/86 season. He made 25 appearances for la Viola, however, he later criticised the rigidity of life in Italy, stating “life is more spontaneous in Brazil…sometimes I just wanted to hang out with friends, party or have a smoke. There is more to life than football”. He moved back to Brazil and joined Flamengo then Santos where had made a further 49 appearances over two seasons. He eventually retired in 1989 after making over 660 appearances and scoring 262 goals; an impressive record for a defensive midfielder. He also won 60 caps for Brazil. During his retirement, he perused a media career and wrote political and economic articles. His playing career wasn’t quite finished though as, at 50 years of age, he made a bizarre comeback for English amateur side, Garforth Town. He joined them in a month-long player-coach role and made one substitute appearance for them.

It’s fair to say his lifestyle was partly responsible for his death although, much like George Best, he never admitted these problems until it was too late. He died on 4 December 2011; officially it was from an intestinal infection caused by food poisoning. He said before his death he wanted to die on a Sunday when Corinthians won the title and his wish came true as they won title that very day.

In 2009 he said modern footballers lack the education and desire to use their voice to promote change, he acknowledged the growth of the game globally and stated footballers have an immense power to drive change for the better. Most people will agree that in a world of colourless, corporate football, driven by profits and filled with media-trained players toeing the party line, the game now lacks true rebels and mavericks. Sócrates was arguably the last true intellectual of the game, both on and off the pitch and football is definitely worse off without him.