Skip to content
Posted in Premier League By By Far The Greatest TeamPosted on April 8, 2014July 14, 2017 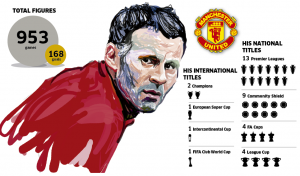 Spanish sports paper, Marca, has created an infographic for Mancheter United legend, Ryan Giggs. It shows the trophies Giggs has won, his status as a one-club man as well as looking at his career year by year.