Manchester City may have produced another abject European display at Borussia Dortmund in midweek, but their ability to pick up points in the Premier League cannot be called into question.

Ahead of the visit of near-neighbours and title rivals Manchester United, I thought I’d take a look at just how invincible Roberto Mancini’s men have been at the Etihad Stadium in the top-flight in the past couple of years:

*My blog focuses on league matches only, though Manchester United fans will want me to point out that they won an FA Cup tie at the venue last season.*

Everton were the last visiting team to leave with all three points, triumphing 2-1 on 20/12/10. Since then, Manchester City have played 37 Premier League home matches and boast the following formidable record:

The following statistics are true of this unbeaten run: 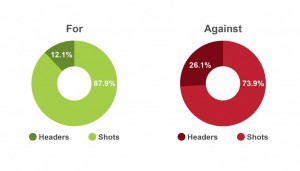 Roberto Mancini’s men are clearly more potent on the ground than in the air, so it is somewhat ironic that a header from Vincent Kompany settled the Manchester derby at the Etihad Stadium last season. One small glimmer of hope for visiting sides is that headers have accounted for just over a quarter of the goals conceded by Man City during this sensational run of form. 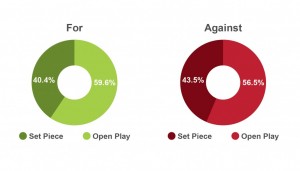 It is clear that set-pieces have had an important role to play at both ends of the pitch, though penalties have been responsible for 15 of the 40 set-piece goals scored by Manchester City.

SIX-YARD BOX / INSIDE AREA / OUTSIDE AREA 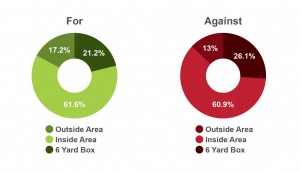 Although there is little to choose between the scored and conceded data, it should be noted that just over a quarter of the goals that Manchester City have let in have been netted from within the confines of the six-yard box.

How have Manchester City fared in these 37 games when scoring or conceding the first goal and just how frequently have they scored or conceded particular numbers of goals?

Manchester City have opened the scoring 32 times during their 37-match unbeaten run. This has to be particularly worrying for a Manchester United side that has developed a bad habit of conceding first in matches, particularly given the fact that Roberto Mancini’s men have gone on to win 30 of these 32 games.

Manchester City have proven themselves to be a potent force in front of goal, with Sunderland being the only team amongst the last 28 visitors that have conceded more than once to still go on and pick up a point.

The overwhelming statistic here has to be that Manchester City have conceded one goal or less in 86.49% of their last 37 top-flight home matches.

Manchester City have clearly turned the Etihad Stadium into a fortress, boasting the sort of home record that was previously associated with Jose Mourinho’s Chelsea or one of many Sir Alex Ferguson teams at Old Trafford. You have to wonder if their powers are waning slightly, however, with Arsenal and Everton both leaving with a point this season and Borussia Dortmund, Ajax and Real Madrid all doing likewise in the Champions League. That said, visiting teams are still not winning there and Manchester United will have to make significant improvements defensively if they are going to be the side that puts an end to City’s long unbeaten run. Indeed, scoring first and restricting Roberto Mancini’s men to no more than a single goal would appear to be key if the Red Devils are to extend their lead at the top of the Premier League table.