England head in to their crucial 2014 World Cup Qualifying matches against Moldova and Ukraine in September, buoyed by the fact that they have a squad containing strikers that have been in good form so far in the 2013-14 Barclays Premier League season.

Apart from Defoe; who has been given just 16 minutes of playing time so far in the 2013-14 league season, the England forwards have all staked a strong claim to start for the Three Lions against Moldova on September 6th. 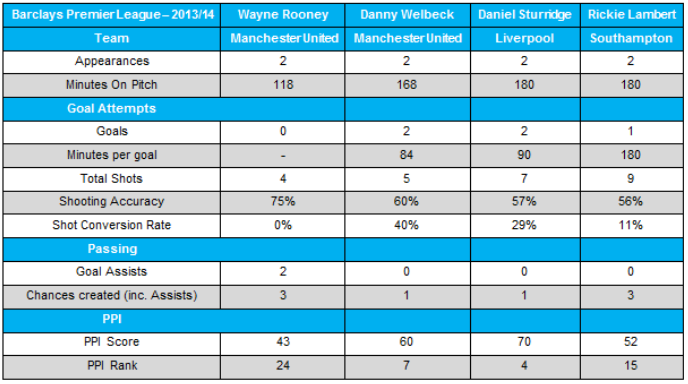 Daniel Sturridge (4th) and Danny Welbeck (7th) find themselves in the top 10 of the EA SPORTS Player Performance Index rankings thanks to their two goals in two games so far in 2013/14, whilst Rickie Lambert has netted once and has earned 52 PPI points (15th).

The only player of the four yet to score a Barclays Premier League goal this season is Wayne Rooney, but the Manchester United striker has made up for this fact by assisting two goals for his club – something that the other three forwards have yet to do. 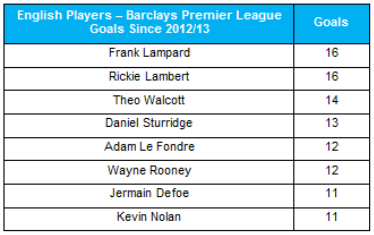 Looking over a longer term, no English player has scored more Barclays Premier League goals since the start of 2012/13 than Southampton frontman Lambert (16), with three of the other four strikers in the squad also featuring high in the rankings. Danny Welbeck has scored just three goals in the league since the start of last season, but with two of these coming in his two appearances this season, he’ll be confident of reaching double figures in 2013/14.