Skip to content
Posted in International By By Far The Greatest TeamPosted on May 14, 2013July 13, 2017Tagged France, Joey Barton 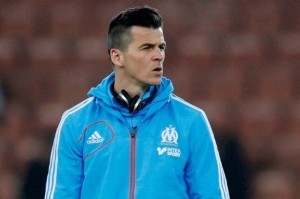 Pompous, arrogant, so full of self confidence it borders on delusions of grandeur. Sorry, I’m waffling but that is what came to mind when I was deciding who is the typical French footballer. I mean they’ve had their fair share of these egotistical, overrated and more often than not, offensive to look at footballers. So, who encapsulates all of that, perfectly?

Now, now, I know he’s technically not French… yet. Barton was welcomed to France by Marseille fans because they admired that he was a hooligan, like them. There are very few places on Earth where such an occurrence would take place, Marseille happens to be one of them and just sums it all up. So, why Joey Barton? Well, that is easy enough to answer, of all the overhyped French footballers to grace my TV screen, I’m looking at Samir Nasri in particular, none believe in their own lack of ability more so than one Joseph Barton, the fact he has the solitary cap for England made me wary of including him as the French nomination for this list but he speaks French, right? Well, my criteria is not limited merely to nationality, speaking the language is equally adequate. The self professed best midfielder when he was in England, couldn’t hold down a place at relegation struggling and now Championship bound Queens Park Rangers. It is that absurd arrogance, that quite frankly cannot even be justified in the slightest that makes Barton the ‘cream of the crop’ or to use his new tongue ‘crème de la crème’ of stereotypical French (speaking) footballers.

He even tries to quote philosophers to make him sound that tad bit smarter, the only thing more ridiculous is Raymond Domench using astronomy to pick his France World Cup squad, did no one think to drug test him? It’s a shame Barton has that one cap for England I spoke of earlier, Domench could’ve really used a Virgo in France’s campaign…

Joey Barton’s arrogance doesn’t just stop at him being the only member of the “Joey Barton is best” cult. No, he isn’t satisfied with that, he even tries to demean fellow professionals and became founder and only member of the “Thiago Silva is overrated” club. It isn’t since he has moved to France that this side of Joey Barton has developed, he was always like this, he now happens to be in a country that accepts him. Good for them, lucky for us.

Okay, so which French player is not one from the bottle as one manager would put it? It just so happens the Frenchman I have in mind, currently works with that manager. Zinedine Zidane. There is no way anyone on this planet could overrate “Zizou” truly the greatest player I’ve ever seen on a football pitch. The best part about Zidane, is that looking at him he had no right to be the best, but he was and he knew it. Only Zidane could have a film that documented a game about him and be considered art. He led club teams to league titles and the Champions League, whilst he led the national side to World Cup and European Championships. Thankfully, no one in the past had offered Laurent Blanc’s suggestion of putting in racial quotas for the French team. There was crazy mixed in with the genius, not quite to the same standard of crazy that seems to inflict itself upon Luis Suarez but there was a dark side to his game. Yet, Zidane will not be remembered for his red cards but rather his magic and genius on the football pitch.