Skip to content
Posted in International By By Far The Greatest TeamPosted on May 7, 2013July 13, 2017Tagged Brazil, Ronaldinho 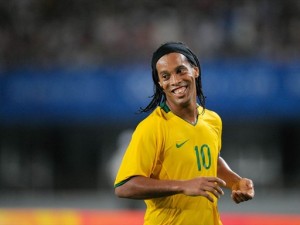 With England done and dusted, I thought the next best stop off point in our global tour would be to go to the most successful country in world football, Brazil. There’s no one quite like Ronaldinho to be the epitome of a Brazilian footballer. Yes, granted he’s probably outrageously better than most but the fundamentals are all there. Football to the Brazilians is like a dance, the feet do all their talking and when they go on to the football field, those feet sing. When you imagine a Brazilian footballer growing up, you assume they perfected their trade on the beach, mazing through the sand and performing spectacular acrobatics. That’s what Ronaldinho done (or may not have done).

I don’t even want to label them as ‘Samba’ footballers but it is how they have become to be known, there is a beat, a rhythm, a soul to their style of football. It is in stark contrast to your average English footballer, there is no emphasis on chasing the ball round like a bulldog, there is only elegance and grace when you watch Brazil. Ronaldinho, plays football with a smile on his face, there is invention, genius and flair in how we plays. Some of his moments on a football pitch are so audacious that most wouldn’t even think of trying them, mainly because we aren’t creative enough to even imagine doing that with a football (‘why should we when we have Scott Parker’, I hear you all shout?). Brazil are the best at what they do and Ronaldinho is the best of them. He passed a ball with his rear, he passes the ball when he isn’t even looking! These are but a few moments in Ronaldinho’s career when he has changed what millions of kids attempt to do whilst playing football in the playground and more often than not, failed.

There was uproar when the team moved to a more modern, physical approach under Dunga. The essence of Brazilian football was being drained from them slowly, but it is now returning and Ronaldinho once again finds himself part of the fold in time to host the party of the century when the World Cup flies to Brazil next summer.

There’s a long list of players like Ronaldinho, just watch those ‘Joga Bonito’ adverts with the whole Brazil team taking part in light hearted showboating to make us all feel inferior with what we can actually do with our two feet and the football between them. Yet, they too have their exceptions to the rule and fittingly this exception plies his trade in England, more specifically London, the west side of it, that’s right, Ramires. There doesn’t seem to be much elegance or grace to his game, his feet often work quicker than his brain does but you need the right mix of sugar, spice and everything nice if you’re to be successful. Ramires provides Brazil with an unparalleled work rate, he’s an engine that can’t be switched off and whilst he is capable of producing moments of magic as he did at the Nou Camp, they aren’t the norm for Ramires. He’d rather run and run, a bit like Forrest Gump. It is for this reason he probably doesn’t draw the accolades when people talk about the Brazil team, he isn’t very Brazilian after all. Can you imagine if Ramires was English though? Blimey, he would be the captain, part of folklore, kids would be named after him! Alas that is not the case and Ramires finds himself the ‘ugly duckling’ to the Cinderella team that is A Seleção.