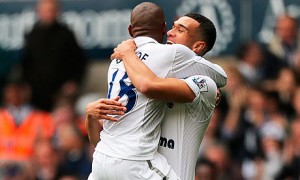 It’s still early days in the 2012-13 season, but the turning point for the fortunes of Tottenham Hotspur may have been half-time in the home match to Queens Park Rangers.

Spurs were 1-0 down, playing terribly against the side bottom of the table. QPR with central midfield duo Alejandro Faurlin and Esteban Granero to the fore were playing better than expected, but even so Spurs were dreadful. No cohesion, no rhythm, no spark.

At this point Spurs only had five points from four games, their one win coming against a hopeless Reading side. Following late equalisers by Norwich and West Brom at White Hart Lane and the disastrous end to last season, people were getting restless. 21 points from 17 league games is no way to appease angry fans. Andre Villas-Boas was getting criticism from the press and facing the vitriol from certain fans unhappy that Saint Harry Redknapp had been sacked after arguably Spurs’ most successful era for decades.

Villas-Boas to give him his due didn’t waste time in that half-time interval. Off went Gylfi Sigurdsson, on came Steven Caulker. Gareth Bale, treading water at left back in the first half returned to his natural home on the left wing. Jan Vertonghen moved to left back while Caulker slotted in at centre back. The response was an improved performance and a ferociously fought for 2-1 win. Spurs have since won at Old Trafford for the first time since the fall of Margaret Thatcher, calmly disposed of Aston Villa and now sit pretty after seven games a point off second place, two points ahead of the much more highly touted Arsenal.

Steven Caulker has played in every minute of Spurs league games since he came on as a half-time substitute against QPR and been excellent. This looks like being the start of him fulfilling his rich promise which has been evident for many years. He was impressive during his season long loan at Swansea last season and was voted fans’ Player of the Season in his loan spells at Yeovil and Bristol City. He’s young, extremely talented and set to be a star for Spurs and England for years to come. Playing alongside veteran William Gallas as he has done recently can surely only help his development.

Caulker carries on the tradition of fine homegrown centre backs at Spurs, following on from Ledley King and Judas Sol Campbell before him (in the same way Southampton with Bale, Theo Walcott, Alex Oxlade-Chamberlain and Adam Lallana only seem to produce good wingers). Though Caulker is the cream of Spurs’ young talented crop, he is the beneficiary of a Spurs academy producing more and more players with the ability to play in the first team.

Spurs’ youth policy has been pathetic for many years, especially compared to the highly geared youth system down the Seven Sisters Road at Arsenal. A dearth of young talent has led to young players having to be bought rather than be produced, with King until last year the most recent player to come through the academy from a young age and not be bought from another clubs when already close to the first team. For a club of Spurs’ stature, to produce so few youngsters is a risible disgrace.

But this has changed, with a number of gifted youngsters starting to make the grade for both Spurs and England. Jake Livermore has already got a full England cap, and while that was partly down to the miserable lack of young central English midfielders within a year he went from not having one Premiership start to being an England international which isn’t to be sniffed at. Caulker has played extensively at England youth level along with his Spurs appearances, while Harry ‘The Harrykane’ Kane is a precocious Teddy Sheringham-esque forward who on occasion got picked ahead of Jermain Defoe in pre-season. ‘Broadway’ Danny Rose, even if he doesn’t make it at Spurs will always be remembered fondly for his box office smash of a goal against Arsenal.

While those players have played extensively at international youth level and appeared in the Spurs first team, the likes of ‘Peter’ Andros Townsend, Adam ‘Taxman’ Smith, Ryan ‘Frankie’ Fredericks and Tom ‘Not Andy’ Carroll also have caps at England youth level and got experience for the first team. Even if in the case of Fredericks and Carroll it came in last year’s Europa League which Harry Redknapp treated like an irritating mother-in-law as he fielded second if not third strength teams in the competition.

These players are not alone. Australian Massimo ‘Maccarone’ Luongo is impressing in a loan spell at Ipswich, Ryan ‘Newsnight economics correspondent Paul’ Mason got possibly the briefest debut when he came on for approximately five seconds at the end of the Europa League game against Lazio, while Cameron ‘Duke of’ Lancaster and Jon ‘The story of Tracy’ Obika are other forwards who’ve shown flashes of potential.

All the players mentioned above are academy graduates, and though not all of them are going to make it Caulker and Livermore already have, Danny Rose isn’t far off while it will be a surprise if Townsend, Carroll and Smith don’t feature heavily in the Spurs team at some point in the future. This improvement in the quality of academy graduates is particularly helpful with the Premier League’s rule that eight players of every club’s twenty five man squad need to be ‘homegrown’ (be registered with an English or Welsh club for three years or more prior to them turning twenty one).

Along with the need for homegrown players to fill out Premier League squads, Andre Villas-Boas has been keener on giving young players time on the pitch compared to Redknapp, who when not in the Europa League preferred veterans to youngsters. Caulker has already praised Villas-Boas for his ‘fairness’ in selection and for ‘not having favourites’ (a dig at Redknapp perhaps?) while Kyle Naughton, in the Spurs wilderness under Redknapp, deputised for Benoit Assou-Ekotto solidly at left back until he got injured. Livermore too was regularly getting selected before injury, while Kane, Mason, Smith and Obika have also got game time at various points.

An important of Spurs’ strategy with young players is to loan them out to other clubs. They abolished their reserve side in 2009, deciding to loan out players needing experience and perhaps arranging a friendly if a first team player needed a game to recover from an injury.

This has had mixed results. With someone like Caulker, it worked beautifully because he was a first team fixture wherever he went and he got valuable experience. For the former prodigy John Bostock, all this policy has led to is the former Crystal Palace man getting a good start on his quest to sit on the substitutes bench at all 92 league grounds. Livermore struggled to get a start on loan to various Championship clubs yet impressed at a higher level in the Spurs side. Youngsters going from the White Hart Lane substitutes bench to a slightly more cramped substitutes bench at a championship club isn’t going to do much good.

But giving players experience overall has done more good than bad, as proven by the increasing number of players to contribute to the Spurs first team.

The academy has slowly improved in terms of the players’ it’s churned out since Daniel Levy became chairman in 2001. Levy’s arrival saw more money and more emphasis on the academy, while the arrival of Martin Jol and Frank Arnesen in 2004 saw a philosophy of passing, attacking football implemented throughout the club at all levels.

Since then, there has been constant progress, the evidence of which is the increasing number of good players being produced. The NextGen series last season showed the huge amount of promise that exists at the club, with Spurs beating Inter Milan 7-1 on their way to the semi-finals before having to withdraw due to fielding two under age players. Inter went on to win the trophy.

This progress should continue with Tottenham’s new training facility at Bulls Cross in Enfield. It has attracted rave reviews so far and is exactly the sort of modern, state-of-the-art facility that Spurs Lodge in Chigwell wasn’t.

The £35m or £45m (depending on what newspaper you read) complex with eleven full sized pitches will surely help the development of young players, as well as helping attract young players from other clubs. The facility has been in the offing for many years and means Levy in a few years’ time will have delivered a world class stadium and training ground, along with arguably Spurs’ most successful period for over twenty years. Not bad for someone with no background in football.

Under his chairmanship Tottenham’s youth system has improved significantly, is helping the first team now and if the talent that’s at the club currently is nurtured correctly, Spurs could have a terrific bunch of homegrown players who are regular starters in a successful first team a few years down the line.