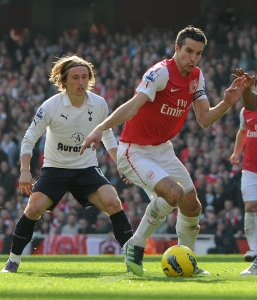 Not since the days of Pierre van Hooijdonk have we seen the threat of industrial action loom over English football like it has in the last few days. That’s not entirely true; there have been strikers before and since. Who can forget Carlos Tevez’s golfing tour of Argentina (apart from Mancini of course)? But van Hooijdonk’s actions are the ones that stick in my mind the most in current times. During the pre-season, angered that his club had not strengthened the team and were now reneging on a promise to let him go, van Hooijdonk took matters into his own hands and simply walked out. It all sounds eerily familiar.

Van Hooijdonk lost that battle, Nottingham Forest stuck to their guns and the player came back, but it was never the same. His teammates refused to celebrate with him, the fans had turned on him and with his indifferent form Forest found themselves relegated. Arsenal and Spurs may not have to worry about the threat of relegation just yet but if the claims are true and their star players are on the verge of mutiny, if not already there, it’s a huge blow to the North London teams.

Arsenal’s mutineer in question is of course the lethal Robin Van Persie; Mr “Scores when he wants”. Unfortunately for the fans that revered him, he may not score WHEN he wants but likely will score WHERE he wants. With just a year left on his contract, RVP has indicated he has no intention of signing another and Arsenal’s bargaining position has been left desolate as circumstance. RVP has been extremely injury prone, a fact his team’s fans had ignored all season until it dawned on them he was leaving, he’s 29 years old and he’ll want a big payday.

Now it’s believed he is refusing to travel with the squad for a pre-season tour. This may be paper talk, Van Persie was at Euro 2012 and could now be enjoying a break from football before joining back with the Arsenal squad but the fact is he wants to go. Juventus, Manchester City and quite intriguingly Manchester United have confirmed bids in, all much lower than Arsenal’s valuation. They’ve been rejected but as the transfer window rolls on, if Van Persie has walked out then Arsenal may save some money in fines but will lose out in transfer fees.

For Arsenal losing Van Persie would be a massive blow. Last season, he carried the team. Not alone as some would have you believe, but the prior year was his breakout from very talented to world class. He scored goals from everywhere and losing him would be another huge blow to a team that seems to lose at least one star player every summer. Lukas Podolski and Olivier Giroud have already been drafted in but they’re going to have big boots to fill. Van Persie obviously doesn’t believe these are the big names needed to convince him to stay.

Just up the road, Luka Modric might not be his team’s best player as obviously as Van Persie is. In fact, competing with Bale, Adebayor and Van Der Vaart he actually has a bit of competition but he is the one who makes the team tick and has consistently done so for a while now.

Like Van Persie, it seems Modric has refused to travel with his team to pre-season training abroad. However unlike Arsenal, Spurs are not as bent over the barrel due to their guy’s contract. Daniel Levy, who is constantly expanding his image as one of the best transfer negotiators in England locked down Modric to a 6 year deal in 2010. It’s believed that Luka was given assurances that if Spurs did not continue to achieve Champions League football then he would be allowed to leave, this however has been broken.

After a very public courting by Chelsea in the summer of 2011, Modric was forced to stay put. One more season, one more chance for Spurs to prove to him they were a Champions League team on the rise. They attained fourth spot, but wouldn’t you know it, up popped Chelsea to spoil it, winning the Champions League, Spurs once again failed to make it to the big competition.

It would seem that a move across London to Chelsea would be the simplest solution, but Roman and his rubles no longer seem interested. They’ve been splashing cash all over the world buying flashy attacking midfielders; Modric’s simple, elegant style of football does not seem wanted anymore.

And so Modric has went from having all the options in the world to having few (albeit; a few great ones). Manchester United are said to be interested here as well, but the fee is far too high in these times of Glazernomics and Daniel Levy is expected to add on a Premier League Sales Tax, adding between 5-10 million on the price tag to any domestic rival who dares to try and sign the Croatian.

So that leaves Real Madrid and they, like Barcelona, are a team you do not want chasing your player without competition. Madrid don’t need Modric, they want him and he will excel there but they have so many options already. They will not negotiate with Levy but to simply state a price and stick to it. If it happens, it happens. If not, c’est la vie. And like Barcelona they will want the player to do the work. Modric will be expected to do everything in his power to force the move along at Madrid’s price, and he looks to be doing just that.

It was expected that both players would be in high demand and there are offers on the table, but not as many or as high as the North London duo would like leaving them in a predicament. This has stalled the transfers and now the players look to have taken one of the most despised routes to exit that a modern day player can take.

On the high wages these guys are on, no one wants to see a strike. Strikes are best for underpaid, overworked professions like nurses, not multi millionaire playboy footballers.

The fans have already turned against their men just like the Forest fans quickly turned on van Hooijdonk. Their teammates will be unlikely to support them; they will not want to see themselves get weaker while rivals around them get stronger. Some of it may be pride in the club, others will be unhappy that their bonuses will be hurt if the team underachieves, so is the modern day footballer.

This kind of situation is one football desperately needs to get under control. These players know that they are about to see an increase in their wages with a transfer, so no amount of fines will deter them. And sacking them, as great as it sounds, only hurts the club as they will lose out on a transfer fee and would probably be subject to legal action. They best option the clubs can take is to force a player to stay, ensuring abject performance for at least another season all the while they continue to pay millions in yearly wages. And when that’s your best option you know you’re screwed.

So Modric and Van Persie will stick to their guns, they want out and they know that refusing to co-operate with their own team will grease the wheels. It’s sad to see that players, long respected by their clubs have decided to take this route but it’s likely that this will occur more and more as the seasons pass. Clubs are trying to lock down players into long, high paying contracts to retain some semblance of power.

But the power is and will continue to be with the players. Because if your club won’t sell you and the team you want to go to is trying to save on transfer fees to give you the highest payday possible, there’s a simple solution. Strike.