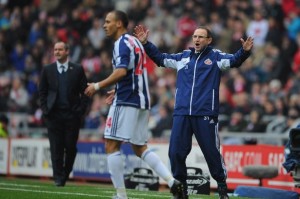 Malcolm Dawson writes….: There are times when I question the logic of spending good money going to football. Yes there are times when the team puts in a performance that lifts the heart, when a close game or a dramatic fightback creates a tension that gets the pulse racing, when a back to the wall performance, defying the odds, creates a sense of relief that brings a satisfaction all of its own. But it seems that more often than not I feel like I did on Saturday. After a half an hour or so I had that familiar feeling of resignation that we would get nothing from the game and what may have been a disappointing couple of hours became excruciating as the whining bloke behind me, kept up a constant two word analysis of the team’s performance. On my way back to the car I bumped into a couple of friends, North East born but living in Staffordshire, who had been to see Show of Hands at the Sage on Friday and were stopping off at Derby on the way home to catch a Bellowhead concert. Folk music may not be your cup of tea but you know what you are getting for your pennies. Still I’ll be back for QPR as will Pete Sixsmith. Here’s what he has to say about the Baggies….

Another Sunday, another defeat, another lost weekend as Sunderland once again shot themselves in the foot with a performance that, like the mythical curate’s egg, was good in parts and pretty awful in others.

Pre-match discussion accepted that it would be a difficult game against a well organised team who are very much in form. But there was a feeling that we had maybe turned the corner in SW6 last weekend and that the Baggies did not travel well.

It looked as if the team might actually convince some of the increasing number of doubters who had willingly bought into the O’Neill appointment 11 months ago, but who were beginning to question the direction in which we were heading.

It started well. The forwards looked lively, with Sessegnon looking much more like Messi and Pele than Lemon and Cunnington. He forced the erratic Myhill into two saves which had us scoffing at the inadequacies of the Throstles’ keeper and being rather smug about the superiority of Mignolet at the other end. It was much more like the Sess we saw and admired last season.

Fletcher led the line well and Larsson, looking comfortable on the right, put in some good crosses and worked energetically. The Baggies were pushed back and struggled to get into the game.

Unfortunately, there is always one player who doesn’t really buy into the team ethic and once again it was Adam Johnson. He gave the ball away in midfield, it went to Zoltan Gera who was allowed space and he picked his spot with a shot that some felt Mignolet should have done better with.

If Simon might have saved that one, the second goal, a minute before half time was an absolute catastrophe. Mignolet has been the epitome of reliability this season and has won us a number of points with the high levels of competence he has shown.

Unfortunately, when a keeper drops a clanger it is often game changing. This one was. At one down, we had every chance of getting at them in the second half. At two down we didn’t. As the ball wriggled away from Mignolet and Long poked it over the line, we had made our life very, very difficult.

The manager came out fighting. Cattermole had already limped off and O’Shea did not reappear after the interval. Instead of Kilgallon coming off the bench, he went one short at the back and shoved McClean on, in the hope that he could inspire us, just as he had done 11 months ago.

He didn’t, turning in another performance which made many of us think of the words “one season wonder” and “busted flush”. But we kept on at Albion and when we had a stroke of good fortune as Gardner’s free kick hit the nether regions of a Baggies defender and flew into the net, hopes were high.

Enter that well known comedy trio of Johnson, Ridgewell and Dean. Johnson did everything right in tracking back with Ridgewell to make sure that he did not get a cross in. Then, at the vital moment, he slid in at him, Ridgewell dived over his awkward challenge and Dean awarded a penalty.

He had booked Long for simulation in the first half and presumably thought that Albion would have learned their lesson. But you have to be certain to give a penalty at such a crucial stage in the game and I don’t think he was. Not a great decision and I said so, loudly, at the time.

That took us out of the game. Sess’s goal made the score look a little tidier and we might have equalised when Cuellar’s header saw the only decent bit of goalkeeping from Myhill. Their fourth goal was academic.

We played well in parts against a disciplined and assured side that took advantage of our lack of confidence in certain areas. But the errors that we made left us with a very difficult task and we were not up to it. Consequently, instead of rising up the table, as we had hoped, we sank back into the nether regions, a place that we seem destined to occupy for the next few centuries.

Rumours circulated that MON had offered his resignation after the game but a change in manager is not what we need at the moment. We scored two goals at home for the first time since March and we looked a better side going forward than at any other stage this season.

But, in this league, errors are punished and we made three of them. We cannot/must not repeat this on Tuesday night. The eyes of the media will be on the SoL as Good Ol’ ‘Arry rolls into town with a collection of expensively assembled misfits. It is to be hoped that he fails to have the galvanising effect on Rangers that O’Neill had on us last season, or Mark Hughes could be back in a job quicker than he might have thought.

The beginnings of a Sunderland revival or papering over the cracks?

Chelsea, Manchester United, Sunderland: the rights and wrongs of choosing your club