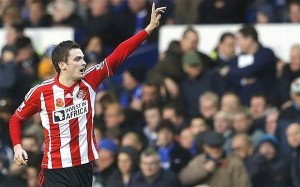 Malcolm Dawson writes: ”There is nothing Pete Sixsmith likes more than a pub crawl, utilising what’s left of our rail network where possible, some craic with knowledgeable football fans and being present at a Sunderland victory. Well as Michael Lee Aday once said, ‘two out of three ain’t bad’ and Sixer sees the green shoots of optimism peeping out from behind the Everton induced blues …”

One of the pleasures I have always taken from football is that it gives me the opportunity to travel through parts of this country that I rarely see and to talk to people I would not ordinarily meet.

Everton away fulfilled those criteria most satisfactorily. I shared pints of excellent Cains Bitter with John McCormick and his brother in law, had a chinwag with a couple of Evertonians of my vintage who enjoyed hearing about the treatment meted out to Jimmy Hill at Fulham a couple of years ago and who were also astounded by the vehemence of our dislike of Coventry City FC.

I travelled home on Sunday on the slow route, which took me past Ribblehead Viaduct, a structure of such staggering beauty and power that if it were a footballer it would be Marco Gabbiadini on a good day, then through Hawes, over Buttertubs to Reeth, before returning to the bank free zone known as Shildon. There are few finer runs in England than that one.

But the most rewarding conversation came as I queued for the Soccer Bus that was to take me back to Sandhills Station and the Southport train. Two Everton fans categorically stated that we did not deserve to lose that game and that we had played well and looked far better than a number of other sides who had previously appeared at The Hulking Relic (aka Goodison Park ).

That confirmed my view that we had actually turned in a strong performance, albeit one that was not rewarded by a point or even a win.

As the clock approached the 73rd minute and Phil Neville was replaced by Apostolos Velios we were starting to believe that we could hold out and that the various homeward journeys to Wearside, Aigburth and Birkdale, would be joyous indeed.

The Greek striker’s contribution was immense, not because of anything that he actually did, – in fact, he had very little contact with the ball- but due to the fact that his introduction allowed the always impressive Marouane Fellaini to drop back from his advanced position into his more accustomed role, just behind the front two.

Six minutes later, the big haired Belgian had scored one, set up Jelavic for another and the game had been wrested from our grip.

Prior to that tactical switch, Cuellar and O’Shea had held Fellaini very well. Everton had concentrated on getting the ball up to him and we concentrated on stopping him from winning it and then picking up the second ball. It had worked.

Our midfield was sharper and more involved than it has been recently. We won tackles and when we broke, we broke well. We could have been two up by 3.10pm with Sess missing a good chance and Fletcher pulling a shot wide when he might have pulled it back to the onrushing McClean.

What we did was set a tempo from the beginning. The Blues were put on the back foot and although they got back into the game, we played with confidence and zip – so unlike the last four games.

Without Cattermole, Colback looked a different player and tackled sharply and passed quickly. Larsson put in a tremendous shift with some excellent tackles and a number of telling interceptions and it looked a well balanced central pairing.

That we showed pace and panache at times was due to a collective discovery of form by both Sess and Adam Johnson.

Both have had difficult starts to the season and both have had us shaking our heads and wondering what has gone wrong. MON must have been as perplexed as the fans as they failed to provide us with the flair that our essentially workmanlike team needs.

Johnson had a much better game on Saturday. He sought the ball, revelled in the space given to him by the Everton defenders and won the tussle with Leighton Baines. That the one time Roy Keane target rarely had time to get forward was testimony to the impact that Johnson had.

He took his goal well and then cleared one off the line in the second half, to make this scribe feel much happier about his contribution to Sunderland AFC. Maybe we (I) have been expecting a little too much.

Paul Fraser, writing in Saturday’s Northern Echo made the point that at City, Johnson was in the second level of players and that this gave him a little more room to work in, as the opposition concentrated on Tevez, Aguero and co.

At Sunderland he is seen as the potential match winner in the midst of a more prosaic collection of players and he will be heavily marked, particularly in home games. He has to work out how to win these battles – and he certainly did so on Saturday.

However, we failed to take a point, and that was due to not picking up Fellaini when he went deeper. It was almost as if we breathed a sigh of relief and dropped our guard when we saw him pick up the ball on the edge of his own box.

What we did not do was mark him when he came forward. Look at the goal he scored. Larsson was struggling to get close to him and he was allowed time to shoot. It went through several pairs of legs and could, on another day, have been deflected for a corner. Or not.

The winner was an audacious flick, which just eluded O’Shea and played Jelavic in. He doesn’t miss those. Much misery in the 1960s style Bullens Road Lower, a stand replete with wooden floors, cramped toilets and pillars that block your view. I half expected to see Alex Young and Roy Vernon tussling with Martin Harvey and Cec Irwin.

So, yet another miserable result against Merseyside’s Decent Club, but one which gave a little hope for the future and was discussed over pints of Thwaites’s Wainwright Ale in the excellent Guest House in Southport, a pub that, unlike me, seems to get better with age.

And so, on to Fulham next week. They concede a few so maybe, just maybe, we can make them suffer. Unfortunately, they too have a player as clever as Fellaini in Dimitar Berbatov. Here’s hoping he puts on his “can’t be bothered” head on Sunday morning.

The trip down was spoiled by Brian Matthew spinning Max Bygraves’s record of When You Come to the End of a Lollipop. As a piece of music making it was as inept as the performance put in by referee Lee Mason. Bygraves’s chorus of “Gilly O golly, how I love my lolly” was matched for banality by Mr Mason’s staggering decision to book Danny Rose for being knocked over by two Everton defenders (do you suppose Danny may have had a word or two about it to get him into the book – ed?). Sometimes with refs, fings ain’t what they used to be!!!