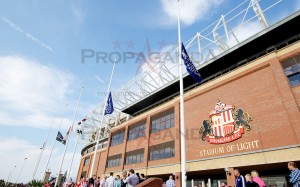 At the end of week in which we were reminded yet again that there are sometimes more important things than football, it fell to the city of Sunderland to host a group of supporters who have been campaigning for more than two decades to expose the lies and cover up perpetrated by those in authority. The findings of the Hillsborough report will have come as no surprise to the majority of fans who attended games back then and one of the shocking aspects of the affair is the extent to which establishment figures have waited until now to admit their failures. Pete Sixsmith was in attendance to witness the first home game of the season’s Premiership campaign in a ground where The Lads can now attack a goal with home fans behind it in both halves.

Back into the old routine at last, after postponements, Rugby League and World Cup qualifiers, it was good to be back in an almost full Stadium on Saturday to witness the first home league game of the season.

The 5.30 kick off did disrupt the routine a little bit, but it enabled me to tick off Sunderland West End’s Wearside League fixture against, Harton and Westoe, a tight game that ended in a 1-1 draw that satisfied both teams.

The car was parked in the same place, the same route was followed past the now closed Italian restaurant where, under previous ownership, we ate one of the worst meals in the history of humankind. The sardines in tomato sauce still provoke an involuntary twinge from my never too sensitive stomach.

Over the road, past the hordes drinking in The Victory Club, The Deaf Centre and The Constitutional Club and then over the railway bridge, to see a strange sight – thousands of red and whites milling around the South Stand, with no barriers or stewards in sight and no away fans being given prime seats, just as we are not when we go away.

Familiar faces in the concourse and familiar faces as I trooped up to the steps to my seat. Doug Forrest, new occupant of Row 31 Seat 403, no Joan Dawson as she was at a family wedding, the same faces to the left and in front, while behind us three young men from Gibraltar, over for the Great North Run.

The Stadium has benefited from its summer spruce up. The refreshment bars look better, the signage is much clearer and the screens are a welcome addition. After all if Stoke City and Bolton Wanderers have one, so should we.

There was a feeling of optimism as well. This was a Liverpool side finding its feet under Brendan Rodgers. His style of play was being introduced to a team that Kenny Dalglish had put together with all the care of a toddler playing with Lego, hoping that the bricks might fit if you bang them together enough. Carroll and Adam had been shipped out and Downing and Henderson were warming the bench. Not a great return for £70m.

Club and fans dealt with the aftermath of Hillsborough well. Flags flew at half mast and there was warm applause for the current representatives of the visitors as they came out.

And off we went.

You know what you are going to get with a Martin O’Neill team. We defended well and played on the break. Now that we have a centre forward who embodies the virtues of the English game, this strategy should prove to have more successes than failures and the decision to pay an awful lot of money for Fletcher was vindicated, when he swept home his third goal for the club, after an excellent run by the equally excellent Craig Gardner.

We have a solid side that works hard – none more so than Lee Cattermole, who I thought was outstanding and gave probably his best performance in a Sunderland shirt. O’Neill clearly likes him and sees him as the John McGovern of our side – unsung but effective and a man who, on this form, you can build a team around.

He pushed the much vaunted Joe Allan deeper and deeper (a point missed by Match of the Day pundit, Mr Creosote), tackled Steven Gerrard as hard as Gerrard tackled him and never once lunged in to incur the displeasure of the outstanding Martin Atkinson.

The back four was solid, with Rose making an impressive debut until he tired in the second half. Behind them, Mignolet made a series of good saves, but he really does need to work on his poor distribution. I lost count of the number of times his kicks went to a Liverpool shirt.

For our game to work effectively, the flair players have to perform. That puts a lot of pressure on Sessegnon and McClean, players who will have been identified by opposition managers as the ones they have to stop.

Both of them were tightly marked on Saturday as Rodgers remembered the scuffing they gave Swansea last season. Sess showed some lovely touches but he never quite seemed at the pace of the game and delayed his final ball on too many occasions. Whizzing across to Africa does not seem to help his preparation and he will be away again in three weeks time.

McClean has had a difficult ten days what with his falling out with the “Aged Italian” and the deletion of his Twitter account. He worked hard and tackled back as he always does, but he seemed to want to come inside a little too much instead of beating his full back on the outside. That he was up against the impressive Martin Kelly made his task harder.

As for the visitors, they had the better chances, but as long as they continue to employ Suarez, the words dignity and Liverpool will rarely be heard in the same sentence when referring to events on the field. His absurd dive in the first half earned him a well deserved booking and at times he epitomises all that those of my generation abhor about the modern footballer.

I suppose his goalscoring record justifies his continued employment, but he is almost as easy to dislike as John Terry and Frank Lampard, which is really saying something.

I liked the look of Kelly and the young winger Sterling came into the game as Rose tired. He looks a good player and, if the media don’t turn his head, he could do well.

Borini looked out of his depth and Shelvey failed to do much with the space given him as we sat deep in the second half. This is an adequate Liverpool team who have mid table stamped all over them. Rodgers needs a couple of years to fully develop his style at Anfield – but will the plastic Reds be prepared to wait? The sensible ones will but he will always be under pressure from the media and those who follow the club on TV and the internet.

So a point that at the end I was happy to take and on the shuffle back to the car, the general consensus was the same. Three games unbeaten for those who like their glass half full, three games without a win for those who prefer to see it half empty.

The next two games may well help us to get a firmer hold on what kind of team we are and where we are going this season – and then, after a visit to Eastlands, we have another International break!