Skip to content
3 Comments on Super Sandro Superb for SpursPosted in Premier League By By Far The Greatest TeamPosted on October 30, 2012July 10, 2017Tagged Sandro, Tottenham Hotspur 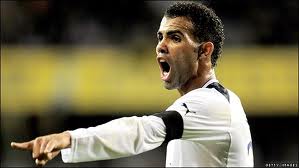 At Spurs this year was a summer of change, which while not a revolution of Russia in 1917 proportions (though perhaps Villas-Boas is Trotsky to Mourinho’s Lenin) still saw fairly seismic changes at Spurs. There was a change of manager, change of playing style and a big change of personnel.

Luka Modric left to sit on the comfy looking substitutes bench at the Bernabeu, Rafael Van der Vaart departed to rescue Hamburg, Ledley King retired with his knee blown to bits while in the biggest transfer story of the summer, former “New Beckham” hotshot David Bentley left to general bewilderment and ridicule to join FC Rostov of Russia on loan. It’s never a good sign when a player joins a club that is so little known the country it plays in has to be mentioned next to it in press reports.

There have also been new signings. Some very good, like Mousa Dembele and Jan Vertonghen and some not so good, like Gylfi Sigurdsson. But there are ever decreasing links with the Redknapp era at Spurs. Younger players are getting more of a chance, the Europa League in a novel move is actually being taken seriously while tactics are no longer just sporadically mentioned by Kevin Bond when ‘Arry is trying to buy a new cardigan on eBay but an important part of Tottenham’s footballing philosophy.

Still, for all of Redknapp’s foibles and faults his time in the White Hart Lane dugout was Spurs most successful for a generation. Of those players that remain from his reign as manager, the one who’s started this season strongest has arguably been Sandro.

In true Redknapp style, Sandro only got his chance in the first team due to injuries to people above him in the pecking order. He’d barely played a match for Spurs after signing from Internacional late in 2010 when due to injury and suspension he wound up starting in one of Spurs biggest games in years, away to AC Milan.

He’d thought he might get a game when Spurs had previously been at the San Siro, away to Inter in the group stages. He got to the airport thinking he was in the squad only to be told he wasn’t in the squad and to go home. Having just moved from Brazil, helping Internacional win the Copa Libertadores to find himself not even making the bench for the fourth best team in England must have been humbling, not to mention potentially traumatic for a young man living literally and metaphorically thousands of miles away from his homeland.

Yet thrown in at the deep end, away to AC Milan in the Champions League last of 16 round, partnered by strength and brute force’s Wilson Palacios he was superb. He made his tackles, tracked Milan’s attackers, passed the ball nicely, ran his socks off and contributed heavily to Spurs amazing 1-0 win that night, one of the best wins in the club’s history.

That night and since then he has shown himself to be quick, aggressive, very strong, excellent positionally, a superb tackler tackler capable of using his long legs to amazing effect at times while also capable of getting forward to good effect. Few can match him for power and strength in the middle of the park. Even fewer can manage to look like the late great Socrates (the Brazil midfield genius not the Greek mathematics genius) as much as he does.

If he has a weakness, it’s that with the ball at his feet he’s either very good or very bad, tending to be in certain matches very profligate with possession. Like ex England fast bowler Devon Malcolm when he’s on, he’s very good. When he’s off, he couldn’t pass wind never mind a football.  Also as good as his tackling is he’s prone to accruing a lot of yellow cards and giving away needless fouls. But he’s young, should improve on those weaknesses and mostly he’s an impressively consistent performer.

After his superb display in the San Siro, the next season and a half was frustrating for him. Though he performed well when given the chance in the first team, he was prone to two nagging presences. The first was injuries which constantly left him short of fitness and meant he never got a long, consistent run in the first team and the other was Scott Parker, whose great hair, comic Englishness and sterling play partnering Modric meant Sandro didn’t have a place in Redknapp’s favoured starting line-up, which of course he rarely changed.

But this season he has been an ever present in league matches, starting matches and becoming one of the leaders of Andre Villas-Boas’s leaner and meaner Blue and White Army. Villas-Boas’s wish for a side that presses opponents more intensely suits the quick, powerful and strong Sandro down to the ground.

He’s had help from Mousa Dembele, who’s so far been an excellent signing from Fulham as a surging presence in the Tottenham midfield. The pair of them have been a dynamic presence, whether it’s winning the ball from the opposition, closing down space for opposing players to play in or rumbling forward to join or initiate Spurs’ potent counter attacks. Dembele tends to do more of the attacking and Sandro more of the defending, but both do the others’ job when necessary and cover for each other like all good partnerships on a football field do.

Both have played excellently, powering Spurs to one of their best ever Premier League starts. Scott Parker’s absence has perhaps been a blessing, as Sandro has thrived in his absence and continued to cement his reputation as one of Europe’s finest young defensive midfielders. Along with Aaron Lennon and Jermain Defoe, he’s been the best of the players Redknapp left behind for Spurs so far this season. All three, unused to consistently starting a big run of games either due to injuries or not being picked have for various reasons had long runs in the side, and all have taken their chances well.

For all of Sandro’s play on the pitch though, off the pitch he’s that most dreadfully clichéd of things, a ‘character’. In British footballing parlance a ‘character’ is usually a borderline alcoholic who played for dozens of clubs up and down the football league ladder and now plies his trade on the after dinner speaking circuit, appearing on Keys and Gray’s show on Talksport or worst of all, being Paul Merson.

Not Sandro though. He plays guitar, is capable of terrific feats featuring a water bottle and Bruce Lee kung-fu and also apparently is a keen darts player, having met Bobby George and played against his son. He could probably qualify for the version of the World Darts that’s on the BBC every January with a bit more practice (though to be fair, Abu Hamza could and he has a hook for a throwing hand).

Still, Sandro is a special breed. A dart throwing, guitar strumming, kung-fu kicking footballer who does everything with a sunny disposition and a smile on his face is a rare thing indeed. With so many gifts, it’s no wonder he’s a fan favourite.

Let’s hope he doesn’t change. For Spurs’s sake. Not to mention there being a home World Cup he could be a big part of in two years’ time…