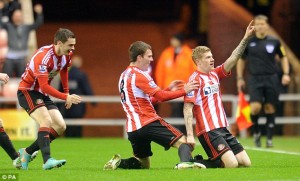 It was cold last night at the Stadium of Light, when Reading came into town. It began like a dream, when our own James McClean put the visiting side one nil down. After such a great start, the defence played their part and Mignolet seldom looked troubled. Before very long, with our wide men on song, Sunderland’s lead was doubled. Young Danny Rose as his confidence grows, gets forward more and more. It was his measured kick and Fletcher’s deft flick, that effectively slammed closed the door. There was more of the same as we went through the game, Reading rarely looked in it. And how the crowd roared when Sessegnon scored again, in the ninety third minute. So with a win to our name, we can face the next game, with hopes and ambitions anew. Our hiccups now cured, three points are assured – after all it’s only Man U.

Peter Sixsmith, whilst delighted with the result is however, not going overboard…

It was a pleasure to get up this morning and select a white shirt for work. That, along with a Sunderland tie, is my usual apparel after a win. They have been lingering at the bottom of the shirt draw since March, making only fleeting appearances.

As are Reading in the Premier League if last night was anything to go by. They were as poor a side as they were the last time they visited us and they went down at the end of that season, while we finished 15th. I can see the same happening this year.

Our performance was good enough to beat Reading. We scored three goals for the first time since Manchester City away last season. That all three came from players we expect to score is a bonus. No own goals or spectacular attempts from full backs, but solid goals from McClean, Fletcher and Sessegnon, names that should be appearing regularly on the scoresheet, gives some grounds for optimism.

McClean took the first one well, courtesy of some wretched goalkeeping from Federici. He should have caught the corner from Johnson and should have reacted quicker to the Derry man’s shot. He didn’t, and that gave us a perfect start.

Fletcher’s goal was a real striker’s goal. He reacted quickly to Rose’s through ball and finish was a sublime flick that left the keeper standing. At 2-0, it would have taken a Herculean effort by our defence to allow the Biscuitmen anything but crumbs.

We did help them by giving the ball away with regular monotony. It is infuriating to watch the players retain possession by playing it sideways and backwards and then, when the killer ball is required, giving it back to the opposition. All four midfielders were responsible for this and they were aided by O’Shea, whose distribution is on a par with Gary Breen of the fondly remembered 15 point season.
The back four were rarely threatened by a limp Reading attack and this gave Rose plenty of opportunities to move forward. He really does look a good player and my initial doubts about him are disappearing rapidly. He tackles well, goes forward effectively and excites the crowd – something that the likes of Gardner, Colback and Larsson rarely do.

I am sure that MON would like to put him on the permanent staff in January, but that depends on Spurs willingness to sell at a reasonable price and if Rose is willing to come to a club that still has a relegation battle on its hands. His Northern roots will hopefully pull him towards Sunderland rather than any other London club.
However, the real priority is a midfield player who will energise us. The current centre midfield pairing of Larsson (who had a good game last night – but he should have scored) and Colback, does not play at a high enough tempo. A player who can seize a game and score a couple of goals is required – from where I know not. It’s time for Pop Robson and Gordon Chisholm to rack up a few air miles to find us a Ukrainian or a Belgian who can do it.

Our rhythm, what there was of it, was not helped by injuries and subsequent reshuffles. Adam Johnson failed to reappear after half time due to a mean and unpleasant tackle by Jodi McAnuff, who put his leg across Johnson to stop him moving sideways.

It was a nasty challenge, totally unnecessary and reminiscent of one that I made on Barry Thompson in the school yard circa 1967. Barry picked himself up and punched me hard, three times, before saying “You won’t do that again, will you?” Had we a Kevin Ball or Jimmy McNab in this team, McAnuff would have spent the second half hiding in the showers. We are a bit of a soft touch at times.

So, we are out of the bottom three and trail our (allegedly) illustrious neighbours by a point. There is still a long way to go and we must start to pick up points between now and the end of January.

We go to Old Trafford on Saturday. I don’t think the white shirt will be needed on Monday.