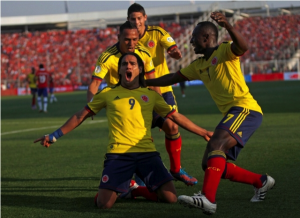 Looking back 18 years, any Colombian will tell you that 1994 was supposed to be their year. With a crop of talent that featured the likes of Carlos Valderrama, Faustino Asprilla and Leonel Alvarez they were deemed one of the favourites. The story ends in tragedy as an own goal eventually would lead to a murder and Colombian football never really seemed to bounce back.

South American football have in the last 20 years been circled around Brazil and Argentina. There has been the occasional “challenge” from nations such as Chile and Uruguay, but no one have ever managed to topple the two heavyweights. Much of the secret behind their success has been their ability to manufacture top-tier talent to Europe and implementing a European style to their game. Another reason is that those two countries have both seen its share of financial upswings which has given them the edge in talent development. With Argentina now suffering, the pendulum swings in the direction of “the little teams”. With Chile having seen its fair share of success after the “Bielsanian revolution”, Uruguay followed suit by grabbing the Copa America-crown this past year. With both those nations seeing a change in generation, in terms of staff and squad, it has opened space for another one of South Americas former big boys. Cue the Colombians.

The state of the Colombia has always been one of controversy. The most controversial Pablo Escobar’s reign of terror where Colombia were notorious for their drug cartels and corruption. Escobar, perhaps the most famous drug lord to ever step foot on this planet, was estimated to have a fortune of $25million in 1989. However, his soft spot for football made it profitable for footballers to stay in the country. This led to a growth in the domestic football as well as more money to finance football pitches, training areas and general funding the national team. The downside was perhaps Escobar’s passion to his own team, Atletico Nacional. The story of how referee Alvaro Ortega was murdered for not having ruled in favour of Atletico against rivals Deportivo Cali paints the picture on the influence Escobar had on football. The end of both Escobar and the spurring growth of Colombian football came in 1994. Escobar was captured and liquidated and Colombia didn’t make it out of the group stages after the unlucky own goal by another man named Escobar. Andres made a mess of a USA cross and slid it into his own net. Upon returning home “The Gentleman of Football” featured in a Colombian newspaper writing “life does not end here” to the heartbroken Colombian public. He couldn’t be more wrong. He was shot and killed on July 2th 1994 in a parking lot in Medellin, his own hometown. The killer, Castro Muñoz, was said to have shouted “GOOOOL!!!” after every shot he planted in Andres Escobar’s body.

The other major problem has been the Colombian government’s never-ending battle with the Marxist-Leninist revolutionary guerilla organization FARC-EP (Fuerzas Armadas Revolucionarias de Colombia-Ejército del Pueblo). Their initial objective was revolutionize Colombia in terms of land reform and to inject social equality to Colombia through violent means such as murder and kidnapping. Between 2002 and 2007 it was reported a total of 557 acts of terrorism in which thousands of Colombians, majority being civilians, lost their lives. As they were struggling financial it has become widespread knowledge that they too have involved themselves in the highly profitable Colombian drug business. However, as their profile has sunk and their support has dropped since they announced themselves to the world in 1964, the call for peace talks was finally echoed by leader Timeleon Jimenez. 50 years of struggling against drug cartels and guerilla groups is not over in the least, but the gradual turnaround in Colombian society can only fuel positivity.

This gives Colombia a new platform to build upon. In terms of the Colombia state, their reputation will only skyrocket with their national team finally starting to produce again. And the foundation to do so is present. They are led by national team coach José Pekerman. The man who by many is given the credit for building up Argentina’s youth teams in the 90’s and early 2000’s. In terms of knowledge and patience with a blossoming project, the Colombians couldn’t have picked anyone better than Pekerman. Alongside him stands the player many rate as the best pure striker in the world, and the first real Colombian superstar of this decade; Radamel Falcao. The pressure will be on him to raise the Colombians from the ashes. After winning the 2011 Toulon tournament, attention will also be given towards young superstar James Rodriguez. Popularly hailed as “the new Cristiano Ronaldo” James Rodriguez stands upon his biggest season yet. As Porto decided to let Hulk move to Zenit St.Petersburg, it’s expected of young James to start showing the goods and grow into a real leader both for his club and national team. Players such as Juan Cuadrardo, Fredy Guarin and Luis Muriel are others that are expected to wave the Colombian colours come 2014.

Albeit ageing, Mario Yepes is still the national team captain at age 36

The big and obvious Achilles heel lies in defence. Mario Yepes, the sole survivor of the 2001 Copa America championship winning squad, is still a regular feature. At age 36 it has become quite obvious that despite being a quick reader of the game his legs and body are not up to par. With Cristian Zapata’s development having reached a frustrating stagnation, one wonders how Colombia will fend for themselves defensively. The team that won the Toulon tournament featured Luciano Ospina and Pedro Franco who into their early 20’s still find themselves playing in the Colombian domestic league. Pekerman has instructed his team to take the game to the opponent, thus hiding the fact that his team is desperately in need of an emerging young centre back. The decision to play a man just ahead of the defence is another way Pekerman has managed to shield their weakness. But sweeping the dirt under the rug doesn’t really make it go away, does it?

The 4-0-victory against Uruguay in Barranquilla and the 3-1 upset in Chile has placed Colombia second in the CONMEBOL qualifiers for the World Cup in Brazil in two years. The vision of another “dark horse”-type side may be on the horizon for a country who not only are in desperate need of sporting success, but a nation that for the first time may go into a tournament without any widespread news story clouding their reputation. Perhaps, for the first time, Colombia could go into a tournament with a sense of joy about themselves. Not only because they get to represent their country, but because of the pride they can take in helping in their country’s growth. And who knows? Perhaps Colombia just ended up in the wrong (Esco)bar andfound themselves in a FARCking mess? All of which could lead up the summer of 2014 becoming the biggest party Colombia has ever seen.