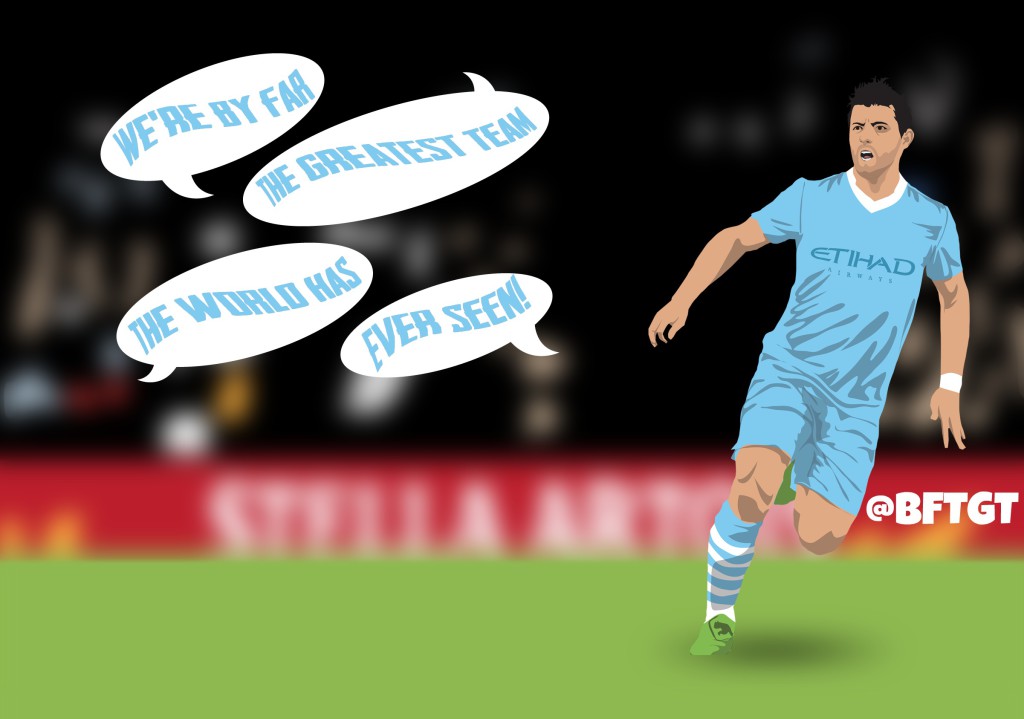 Became the youngest player to debut in the Argentine First Division at 15 years and 35 days, breaking the record previously established by Diego Maradona, July 5th 2003

Became the youngest player to compete in Copa Libertadores, February 2004

Scored his first goal for Independiente in a 2-2 draw against Estudiantes, November 26th 2004

17-year-old Aguero was linked with a £10m move to the German club. “We must move before the Spanish and Italian clubs join the race, otherwise he will be more expensive. He certainly won’t be a bargain but with a young player of such quality you have to be prepared to take a risk.”

“If I had to choose a league then it would be the Premier League. I have been a Liverpool fan for as long as I can remember and it would be a dream to play there. I watched the Champions League final and celebrated every goal as if it was for Independiente.”

Aguero scored his 2nd goal for Atletico using his hand, which turned out to be the winning goal in a 2-1 win.

Aguero’s get-out clause was increased from £25m to £40m. “Atletico is a very big club and I feel at home. I want to stay here for many years and help (the team) achieve something important.”

Aguero was sent off in Atletico Madrid’s UEFA Cup game for spitting at Bolton’s Matt Taylor. UEFA banned him for two games as a result.

“At the moment my head only imagines me being in this club for many years. It is imaginable that I could triumph in any big English club, but at the moment money is not the priority in my life.”

Third highest scorer in La Liga with 19 goals and qualification for the Champions League for the first time time since the 1996/1997 season, May 2008

Named the 2nd best player in La Liga in the Trofeo Alfredo Di Stéfano, May 20th 2008

“I’ve had interest from a leading English team and they’ve asked me to approach Atletico with a bid. I can’t say more until I’ve spoken to the club about the offer. All I can tell you is that it’s one of the best teams in Europe and it’s not Chelsea.”

“I don’t know what the people from Chelsea or Manchester City were doing in Getafe. I don’t know. The truth is they told me they were looking for Cristiano Ronaldo, but I don’t know if they found him. What should I know? City haven’t even asked about ‘El Kun’ so how do I know what they want? What I do know and what I can guarantee is that Kun Aguero wants to be in Madrid, he wants to play for Atletico Madrid and he wants to live here in Madrid. We’re used to stories of this nature and I suppose they won’t stop here today, they’ll keep coming out. But here we have the sun, good weather, a great team, phenomenal supporters and a marvellous coach.”

“Two years ago the agents were talking with us about players and he was one of those but he was too young. Atletico paid big money for him, around 18million euros [about £14million] for a player who was a risk. In the Premier League it’s different and sometimes players will need more time here to improve. We had a lot of confidence in him, we knew that he’s a good player but he needed to play games. We had Crouch, we were bringing in Torres, it was a question of space.”

“The club reached an agreement with the company that manages me to extend my contract until 2012. I know they will work together on the exploitation of my image rights, there’s a good understanding between the parties. All the signs are that I will stay here for a long time, and I’m really happy about that. I’m enjoying it here and I never want to leave, because Atletico was the first club to welcome me in Europe.”

Aguero scored two goals against Barcelona, including one in injury time, in their 4-3 victory over the league leaders.

“Chelsea wanted Aguero and offered €45m plus €5m in bonuses.”

“I know that people were saying they (Chelsea) wanted me during the summer and that there were several teams tracking me but nothing ever came to me and I am happy at Atletico. It’s nice that people say I could play in a team like Chelsea, one of the best in the world. I like it (Chelsea’s interest) and it makes me happy but I am the same person as ever and I think the same as before. I don’t really want to think about any other team. I want to fight with Atletico to the death. I almost feel like I was born here. It’s a club that has given me a lot, pleasure as well as pain, but it’s a place I feel very happy.”

“Chelsea are interested in me because they think I can play an important role for the team. And I think I fit with their style of play. Of course I watch the Premier League on TV and I think it is the best league in the world, along with the Spanish league.”

“Chelsea are a great club. They have become one of the most feared in Europe over recent years. I look at players like Didier Drogba and Frank Lampard and they have been, and still are, the best players in their positions in the world. I could really learn from players like that, there is no doubt. London would be a really amazing city to live in as well, myself and my wife could be really happy there. Carlos Tevez is doing really well at Manchester City but, for me, it is about joining a club who are ready to challenge for honours. City are not ready yet.”

“If we analyse the history and the statistics in Europe, Atletico are superior to Fulham. This is no guarantee in the final, I respect Fulham because they have defeated Juventus, Wolfsburg and Hamburg. They will fight for the ball, but they are not Chelsea, Manchester United or Arsenal.”

Aguero assisted both goals in Atletico’s 2-1 win over Fulham.

“Of course Chelsea is of interest as they are one of the most powerful teams in European football. They show their intent summer after summer in the transfer market and more often than not that intent will see them end the season with at least one trophy. To be the strike partner of Didier Drogba is a thing many players would love to be. But it’s not just Drogba – it’s Lampard, Terry, Anelka, Essien, and maybe even Fernando Torres. They have quality players everywhere.”

Aguero assisted one and scored the other in Atletico’s 2-0 win over European champions, Inter Milan.

Aguero signed a contract extension which should keep him at the club until 2014, January 4th 2011

“This is not merely putting a signature on a contract. It’s also about renewing a commitment to the club at which I arrived when I was only 18 years old and I have been with for almost five years.”

Aguero scored his first hattrick for Atletico in his final game for the club against Mallorca, which also saw him score his 100th goal for them. However, he didn’t celebrate any of the goals, leading to speculation he was going to leave the club.

Aguero does not turn up for Atletico training amid transfer rumours, July 24th 2011

“Now I am a City player. Happy to be at this club and in this city, thank you to everyone for the welcome and the reception.”

In Atletico’s Europa League qualifier against Strømsgodset IF that day, a group of Atlético fans brandished “Agüero, We Hope You Die” banners.

“It was no real surprise to see him leave, but I thought it would have been to a different club. Chelsea’s game and squad are more suited to his style. And of course I am a Manchester United fan, so his decision to move to City is also painful for me. I know City are now one of the big clubs in England, so I wish Sergio luck. But I know from my own time in England that the Premier League is not like La Liga. The key for him will be how he adapts to the style of the game and also the country. He can be a success because he is a star. He can be a king at any club.”

Aguero made his City début against Swansea and scored two goals, August 15th 2011

“I watched the Premier League on television. I prefer it to La Liga and Serie A. I loved Michael Owen. I always followed him at Liverpool. That’s why I started watching the Premier League. Obviously the style of play here is different to Spanish football but I will adapt as quickly as possible and try to be fully focused during training sessions.”

Aguero is named in the shortlist for the Ballon d’Or, November 1st 2011

“In the past he told me everything about Napoli, and I have also seen on TV what he did, how important he was for the fans. This is a matter of pride for me because I am Argentinian. It is my dream, doing what Maradona did for Napoli, doing the same for Manchester City. But I don’t want to talk about myself, it is important Manchester City do well as a team.”

“Why wait until next season if we can win it now? I can promise you that we’ll be fighting until the very end. We all want to make it and though it won’t be easy, we believe we can win the Premier League this season.”

“Kun has to play for Real Madrid. Even though he is flying at City, the best thing would have been to sign for Madrid. He made a mistake. Now, as he is doing so well, it will be difficult to get him from City. However, if Madrid want someone, they get them.”

“For sure it was the most important goal of my career. You score a goal in the last minute to win the title. I’m not sure that is ever going to happen again. QPR were fighting for their lives. They sat back and we knew they would make things difficult for us on the counter-attack. During the (pitch) invasion, loads of fans came over. They grabbed me and kissed me. But the only thing I understood was, ‘I love you’. That made me so happy. Since I arrived at City, everyone has treated me really well. I repaid them with a goal to win the title and make history. I’ll keep doing my best every day to win more titles. All I do is play football so the fans can enjoy themselves.”

“I try not to get involved with problems involving referees. There will always be mistakes for any team and he got the decision [on the Fulham penalty] wrong, but that can happen in any game. All we can do is not let that get to us and just keep on playing our game. There is a little bit of privilege with players who come from that country, but that is normal. We just play our game, and the referee’s job is to know who is tricking him and who is not.”