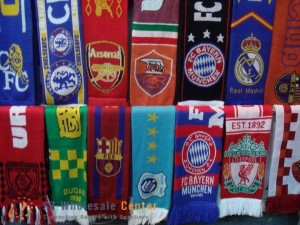 Salut! Sunderland is full of admiration for so much that SAFC does: community involvement, combat against racism, incentives for young supporters, encouragement to players to get out into areas of everyday life where their presence will bring smiles to faces. So it pains Colin Randall to have to bring you this wretched tale …

The heart sank when up popped the Sunderland Echo item describing the latest break-out from the asylum of corporate football.

The Fort, that pub thousands pass on their way to and from the game with many stopping for pre or post-match pints, has had its ramparts shaken by a charmless letter from one of its near neighbours, Sunderland AFC. The flags have to come down. So does anything else bearing the crest of Sunderland AFC. The letter did not arrive on April 1 and is not a joke.

Someone at the SoL thought it might please the gaffers if (s)he dallied long enough on the way to work to jot down a quick note of the offending items on display in the window and, for all we know, take a few snaps to be on the safe side.

Whether this ultra-zealous individual also ventured inside to inspect the tops worn by staff and customers and make sure no one was in possession of a keyring or other item bearing the crest is not yet clear.

But the message of the letter could not have been more plain:

Please note you have 14 days from the date of this letter to cease and desist in all use of the crest and the products.

“If such is not complied with within this time, then SAFC reserves its rights to take further action, without further notice, in order to protect our intellectual property.

Alan Wallace, the landlord, is a Sunderland fan to the core. He spends money in the club shop. He and his regulars have invested sizeable slices of their incomes into active manifestation of their passionate support.

Alan tells the Echo: “We are the only pub in Roker that doesn’t show the foreign football. All the punters think it is disgusting. People here are Sunderland daft.

“I thought the club would have better things to do with their time than pestering landlords who are trying to make a living. They send paraphernalia to me advertising their Christmas party nights.”

Leaving aside the nonsensical first sentence of the letter quoted above – a football club is a football club, a pub is a pub and the flags and other memorabilia would imply an association only to the hard of thinking – the approach to a friendly local business defies belief.

What on earth did the relevant club official think a pub attracting SAFC followers in large numbers could safely put on show to avoid the slender possibility that someone, in the face of all the evidence from beer pumps to the pub sign, might mistake it for an offshoot of the club shop? Pink bunting? Christmas lights?

In an e-mail to the club’s press office, I made the point that SAFC “gets so much right” that it is even more annoying when it acts in such a manner.

“It really does seem astonishingly heavy-handed,” I went on, “to target a pub that has such a close geographical relationship to the SoL and is clearly run and frequented by passionate, loyal supporters .. Surely no one seriously believes that for a such a pub to display SAFC memorabilia implies the least commercial association between club and licensee or is any more than a demonstration of allegiance.

“I cannot believe MoN or Ellis Short would endorse the approach taken, perhaps by one individual acting a little hastily.”

From the person to whom I addressed the e-mail, I received a holiday bounceback. From the colleague to whom I then forwarded it, silence. At least the Echo was told the club was “declining” to comment.

There may be two sides to the story. Who can tell if the club retreats behind “no comment’ expediency? The pages of Salut! Sunderland are there for the club to use to put its version of a story that, on the face of it, brings it no credit.

Sunderland fans ahead of Tottenham Hotspur: In Arsene we trust

STATS: O’Shea’s clearances for Sunderland vs Mirallas’ shooting for Everton