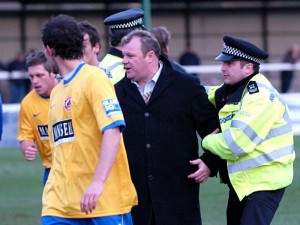 During his time as manager of Boston United he lead his team to promotion from the Southern Football League to the Football Conference in 2000 and subsequently to the Football League in 2002. However, in 2006 he plead guilty to conspiring to cheat the public revenue between 1997 and 2002. He was given a 12 month prison sentence, suspended for two years, after helping the club cheat the taxman out of £250,000 with his chairman Pat Malkinson. The players were being paid inflated wages which were written into secret contracts. Boston pipped Dagenham and Redbridge on goal difference but although the FA fined them £100,000 and docked them four league points they decided to hold it over into the next season, hence promotion was unaffected. Evans was suspended from management for 20 months.

After returning to Boston following his suspension, he was given a suspended fine of £1,000 after admitting to using insulting or abusive words to the match official in their game against Peterborough.

Four months later he was escorted from Grimsby Town’s stadium Blundell Park by Humberside Police at half-time after he berated the fourth official after being incensed when Grimsby goalkeeper Steve Mildenhall appeared to handle the ball outside his area and was immediately spoken to by a police officer after a complaint of alleged foul and abusive language. After the match Boston chairman Jon Sotnick accused the football authorities of waging a conspiracy against his manager. “There seems to be a conspiracy at work,” he said. “At every game Steve seems to be singled out for extra attention from the police – and I’m determined to get the bottom of this. This was a disgrace and I’ve launched my own investigation to find out why the police ejected an employee of mine from his place of work. Steve is no angel, and his language can be rather colourful at times, but that in no way excuses how he was treated. Steve was thrown out of the ground with no money, no mobile phone and was left to fend for himself.” Later that year Evans was removed from the dug out after 55 minutes in Boston’s 1-0 defeat against Wycombe following an altercation with Wycombe’s Tommy Doherty.

The debt Evans amounted before his suspension in fines meant the club were threatened with administration. They had to sell their best players and were relegated from the Football League. Evans pledged his future to the club though, insisting he was going to honour his contract. “I have a contract at Boston and I will not be applying for the manager’s job at Chester City or indeed a job anywhere.” Two weeks later he resigned and was appointed manager of Crawley Town two days later.

In his first season at Crawley he was sent from the dug-out six times. The first two incidents resulted in a four game ban but at the end of the season he was hauled in front of the FA to answer the other four red cards, which he amassed in just seven games, and was given a suspended ban for the start of the following season. He appealed the four game ban and had it reduced to two, but then appealed the suspended sentence. The FA responded by slapping him with an immediate ten match ban and another suspended ten match ban on top of that. For those ten games he was to have no contact with his players for two-and-a-half hours before games, at half-time and for 90 minutes afterwards.

Yesterday, Evans was banned for six games and fined £3,000 after the FA found him guilty of using abusive and insulting words and behaviour with a reference to gender. The incident took place following an ugly game between Crawley and Bradford which ended in a mass brawl and five players being sent off in the changing room. Outside the dressing room Evans reportedly pulled down his trousers in front of a female steward.

Evans is now the manager of Rotherham, has lost four of the seven games they’ve played this season and won’t be able to take the dug out again until mid-October.