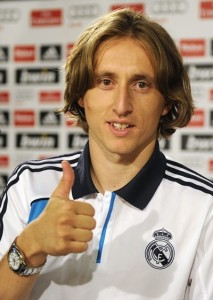 On Monday morning came the long awaited news. Luka Modric was gone. The bags and suitcases which were long since packed were finally put to good use as he officially made the move from the old, slightly tatty, homely feel of White Hart Lane to the vast, wonderful, intimidating cathedral that is the stadium of Real Madrid which no Englishman can pronounce properly.

The feeling amongst most Spurs fans that I’ve encountered is not so much anger as relief he’s gone. This summer and last summer hasn’t been a ‘saga’ as you’ll see it termed in the press (sagas are surely stories about love, romance, death, betrayal, that sort of stuff. Not a case of an employee wanting to move from one organisation to another) but has seen weeks upon weeks of newspaper articles, blog posts, Twitter rows, innuendo and waffle.

Modric has been keen to leave for a while. Taking off my replica Spurs 1984 UEFA Cup final shirt, I can see why. As good as Spurs have been the last few seasons, we were never going to be good enough for Lil’ Luka. Modric is good enough to play for any side in the world. With the exception of Barcelona he’d start for any team in the world. He’s that good a player. Good enough to win league titles and Champions League titles, which Spurs frankly are a million trillion miles from doing.

Aside from King Ledley, I’ve never seen a better player at the Lane. I was only born in 1992 so I never saw Hoddle, Ardiles, Gazza, Waddle, even Klinsmann or a peak Teddy Sheringham. But I’ve seen the likes of Bale, Berbatov, Ginola, a veteran Sheringham, and Modric comfortably outshines them all.

I’ve never seen a player as comfortable on the ball as Luka was. The ball really did look stuck to his feet. You’d see a hairy-arsed defensive midfielder look to tackle him and ‘welcome’ him to the game with an over-aggressive challenge designed to hurt the player more than win back possession. Luka would calmly move away from the ‘passionate’ (i.e dangerous) opponent with the minimum of movement and plonk the ball perfectly to a teammate’s instep.

I am perhaps unlucky to have born in an era where the likes of Ben Thatcher, Steffen Freund, Gary Doherty and Anthony Gardner clearly spelt out the concept of a Spurs player’s second touch always being a mistimed, clumsy tackle. But truly Modric had great passing, superb ball control, time and space and the ability to dictate a game that few other midfielders I’ve seen have had. I feel he’ll be a big asset to Real Madrid.

It almost feels like a shame that after being such a brilliant player for Spurs, that him leaving should be felt with not anger or real sadness but relief that he’s finally gone. There has been the odd berk saying he’s overrated because ‘he doesn’t score enough or get enough assists’. Modric indeed was notoriously poor in front of goal and wasn’t a prodigious provider of assists.

But his game isn’t about scoring goals or playing through balls for strikers to run on to. His game is about keeping possession and knitting his team’s play together. If he had scored goals and got a sackful of assists, he’d have left Tottenham long ago and would be widely regarded as one of the best, if not the best midfielder in the world.

Mostly, now he’s gone, there’s a feeling of relief that finally all the newspaper talk about his future will cease. That all the wannabe bloggers and fake ‘ITK’ agent accounts can stop popping up on Twitter timelines with made up nonsense about Modric. That we no longer have a prized, expensive commodity who wasn’t actually playing.

Also we now have reportedly £30m more to spend on new players, with Fulham’s Moussa Dembélé seemingly the first player on the shopping list. This money is badly needed. Andre Villas-Boas not only needs money for some strepsils and beard trimmers but reinforcements on the pitch. A replacement for Modric in midfield is needed to partner guitar playing, kung-fu kickin’, defensive midfielder maestro Sandro. Brad Friedel in goal isn’t well suited to AVB’s defensive high line while a striker or a winger would also be handy. Dembélé put in a great shift at Old Trafford at the weekend and will be an excellent addition, as would rumoured arrival of Hugo Lloris.

Whether Modric’s departure will be good or bad for Spurs is totally dependent on the players who replace him. If Spurs do a Dalglish and spend large sums on mediocre players (not the defending a player found guilty of racist abuse bit) losing Modric will be a disaster. But if we copy Newcastle’s blueprint, buy wisely like they did after selling Andy Carroll, we should see that reflected in improved performances on the pitch. Lloris and Dembele would be a good start.

Perhaps another reason why Modric leaving has been a sombre rather than angry affair is the fact that Spurs fans have suffered far worse in the past. The Sol Campbell shambles was horrific. The club’s one and only world class player, the pride of the club, leaving for the hated local rival for free when he could have been sold for record amounts. That was bad. I’m not sure any club in history has ever felt as bad about a transfer as Spurs did that off-season. It was both humiliating and soul-destroying.

By comparison, Modric leaving is nothing. It’s not even as bad as when Dimitar Berbatov left. Berbatov was a wonderful player who virtually went on strike to force a move to Manchester United while Spurs in typical fashion beat Roma 5-0 in pre-season, raised hopes of a top four finish then garnered two points from our first eight league games.

Modric at least played after Spurs refused to sell him last year and then left for a club not in England. It’s the lightest of breezes compared to the devastating tornado that was Campbell moving up the Seven Sisters Road to play in red and white rather than blue and white.

Had Modric left for Chelsea like he was purported to last summer that would have been a real kick in the bollocks. Our best player leaving for Chelsea after they beat us 5-1 in the FA Cup and knocked us out of the Champions League would have been like having your missus cheat on you then taunt you by having a naked photo of her lover on your bedroom wall. Modric in Madrid, well away from England, won’t be haunting us twice a season. As a fan, thank god for that.

Modric may have behaved poorly at the end, not going on a pre-season tour to America and sitting out our season opener against Man United last season. But part of me doesn’t blame him for that. I knew, he knew, Levy knew that he had outgrown Spurs and it was only a matter of time until he left.

A better team offering three, four times his current salary were out there for him. Most people I think would be a pain in the backside if it meant getting a better job that paid four times more than what you were currently getting. That’s not ‘football these days’ as some deluded Talksport moron might say, harking back to the halcyon days of player loyalty that hardly existed or only did due to a shameful lack of basic rights for footballers. That’s just life.

Mostly, I’m happy that Modric has gone. Happy that he and Spurs can move on, happy that Spurs now have money to spend in the last week of the transfer window with Daniel Levy controlling the purse strings, and ever so slightly happy for Luka.

My affection for him has been tempered by him not being a willing participant in Tottenham’s last two pre-seasons, but four seasons of him bestriding the Spurs midfield like a colossus despite only being 5 ft 7 and having a face like Gail Platt outweigh his obvious hankering for a transfer the last two seasons. He’s a magnificent player who’s contributed significantly to some of my greatest moments as a Spurs fan over the last few seasons.

Bye bye Luka. You will be missed. And thank god you’re not playing for Chelsea.

Former Manchester United man – The boy who will never be king