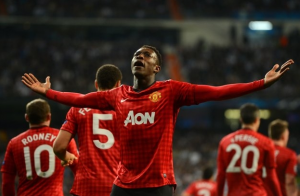 Here’s a look at few selection and strategy options for Manchester United ahead of their Champions League second leg fixture against Real Madrid on March 5th.

If all players remain fit, the dilemma for Sir Alex will be whether to stick with the same central defensive partnership that started at the Bernabeu or bring in Vidic to replace either Ferdinand or Evans. Given that Ferguson is still managing Nemanja Vidic’s return from injury, it won’t be surprising if he is preferred for the Norwich game instead on the Saturday prior to the second leg. Moreover, both Evans and Ferdinand put in a solid shift in the first leg. Vidic might be a better header of the ball and more of a physical presence but against a team like Real Madrid who will be looking to counter attack, the mobility of Evans will be preferred.

In all likelihood, Sir Alex will require Rooney to put in another ‘defensive’ shift, pressing high up the pitch by marking Alonso, and tracking back down the wings to provide cover. But, unlike the first leg where he was deployed on the right, Rooney needs to be playing on the left. This is a position that he’s played in the past. Although, this isn’t his ideal or favourite position, he can’t do much worse than he was in the first leg.

This might seem a tad harsh given that he was asked to do a specific role and curb his attacking instincts. But it was Rooney’s intent to stop Ronaldo despite both Phil Jones and Rafael were doubling up on him that left Fabio Coentrao in lots of space to have an effort on goal (that was pushed onto the post by De Gea). He was at fault for not closing down Angel Di Maria soon enough; hence enabling the winger to pick out a perfect pass for Ronaldo’s equaliser.

A move to the left will provide extra cover to deal with Di Maria who found a lot of space and time and ran Patrice Evra ragged in the first leg. As in the game against Spurs where all emphasis was placed on closing down Bale which in turn left Lennon unattended, similarly the mission to thwart Ronaldo using effectively three players (Rafael, Jones and Rooney) meant that Di Maria saw more of the ball and was a constant menace down the left flank. In addition, while attacking, he can drift inwards and switch places with Kagawa (assuming the latter starts) and play in the hole behind Robin Van Persie.

Welbeck can play his pressing game on the right too as he did so quite effectively after coming on as a substitute in the win over Manchester City earlier this season. The other option, unthinkable as it might sound on the back of his performance in the first leg, is to drop him in favour of Cleverly or Nani. The latter can be frustrating at times but can still attack better with the ball, is a better finisher, and can put in a decent cross (against Reading in the FA Cup). In a game where chances could be a luxury, it is imperative that United make the possession and opportunities count.

Plan B if Phil Jones is injured?

Up until a few weeks ago, not many would associate Phil Jones with Plan A against Real Madrid in a Champions League knockout fixture (mind you, some probably still don’t). The earlier jack of all trades is now being called on to carry out a specialist role of marking (read: chasing and harrying) the oppositions’ ace card. Tom Cleverly, who started all of the team’s ‘big’ Premier League games (Chelsea, City, Liverpool) was sacrificed in the process. But having sustained an ankle injury that saw him on crutches after the FA Cup tie against Reading, Jones’s chances of a repeat performance in the second leg is uncertain. If this were to be the case (extent of injury not known at the time of writing this article), it is likely that Cleverly will start alongside Michael Carrick in midfield. He might not constantly breathe down Ronaldo’s neck but his quick passing, intelligent movement and ball retention capabilities will be important for United.

Though fans at Old Trafford would prefer a more attacking approach from their team, one can expect Ferguson to exercise a bit of caution and focus on ball retention, both of which will be quite important in protecting what is essentially a lead in the tie for Manchester United.

VIDEO: Should Liverpool have been awarded a penalty today?