I’ve always said I don’t believe player loyalty to be a characteristic of the greatest importance as when it boils down to it football is a profession like any other and looking to further your career financially or professionally will always be an incentive. That isn’t to say I don’t value loyalty very highly when it exists nor that it has no place in football. This past week was a prime example of that when Daniele De Rossi rejected what would have been a mega money move to Manchester City.

I was amazed by reports that, in an attempt to lure De Rossi to Manchester, Roberto Mancini told the player that he didn’t want to end up like Totti. In his press conference De Rossi said that he was shocked at some of the reports in the media and I believe that comment would have been one of them. It wasn’t a wise move on Mancini’s part to try and convince De Rossi by insulting a player who likely would have been his idol growing up. It also would make a mockery of someone who valued his club loyalty above more likely success and blatant disrespect to one of the greatest footballer’s in this and in fact any generation.

Obviously they aren’t the only example across the world, with Manchester United still boasting the likes of Paul Scholes and Ryan Giggs. Barcelona have their numerous academy graduates who have known nothing outside La Masia and the Nou Camp. Yet, these are two of the most successful clubs in the world and a move away to progress their career would seem unlikely as they are at the pinnacle of world football with their respective clubs. Which begs the question, why do some of these one club men stay at their team despite a lack of success? Why do they not cash in for money or for glory?

In the case of Francesco Totti and Daniele De Rossi, the answers are relatively simple and make for the foundations of a Hollywood love story, except this is the love between a boy and a club, a player and the fans, a man and a city. Let me begin the explanation by telling you that both were born in Rome, both grew up with the Stadio Olimpico not far away and would’ve dreamt to be playing there in front of a packed stadium. So there is the first stage, the childhood dream, the love for a club before ever having kicked a ball. It is widely known that Totti’s mother rejected a move to AC Milan for her son when he was still a boy in favour of staying in the capital. Not many footballers manage to play for their boyhood club and even less then decide to leave the club.

Still it isn’t enough. There are plenty of scenarios when players have played for the club they supported as a child but when they exceeded the talent of those around, sought out transfers to teams that were more capable of meeting their expectations. At Roma both players have gone beyond the status of being the best players at the club, they have gone on to symbolise what it means to be a Roma player for the better part of two decades. Totti and more recently De Rossi are what every footballing fan pictures when Roma are mentioned. They’ve gone on to become heroes at the club and contextually to the city they were born and raised in, they’ve both acquired a gladiatorial like image: De Rossi for his determination and strength is seen as a midfield general; whilst Totti is the ever graceful and deadly trequarista, the position that has become synonymous with Italian football. Both players have a dark side to them but it only adds to the aura of the pair and delights the home fans.

Their passion for the club is plain to see, their love for a city and the fans is even stronger. During his press conference De Rossi made it clear that being a Roman was an important motive for him staying. He also paid tribute to the fans at the club who during a pre-season friendly only a few days before made it clear that they wanted their talismanic midfielder to remain at the club.

It is also a lot easier when the city you share this love for happens to be the eternal city of Rome. There are very few places in Europe that have more allure to them than the capital of Italy and equally very few that have the great history that the city can offer. I personally have never been, but that isn’t to say it is for a lack of wanting. One day I will get to see what all the fuss is about but it is the same admiration I have for London and the city I’ve grown up in… but they have better weather! These may seem trivial points but playing football is only a part of a footballers life and the surrounding environment is an important aspect to where someone may ply his trade.

It isn’t all a fairytale reason why the players have decided to stay at the club though. They may have turned down better offers from clubs around Europe but they are hardly in need of more money. Both players are duly rewarded for their loyalty and it would be a different story if Roma were unable to afford adequate wages. Yet, don’t let that take away anything from two players who clearly love the club they play for and almost feel like they owe their services to them and the fans.

I remember Roma being on TV during a European campaign and one of the pundits claimed that, had Totti been good enough, he would’ve moved elsewhere a long time ago. Roma remain one of the giants of world football, even if it is only as a name, and still continually challenge for domestic glory. A player who decides to remain at a club for love should not have his ambition put to question. Their ambition lies in wanting to win the same tournaments the bigger clubs strive for but they simply want to achieve it with the club they have grown up with. These select few players who sacrifice everything for their club deserve to be praised, not ridiculed for their decision.

As the 2012/2013 season in Serie A is about to commence, Totti enters his 20th season at the club and his 14th year in charge of the captaincy. The man the club refer to as “Il Bimbo d’Oro” (The Golden Boy) is the highest capped player at the club and their all time leading goal scorer. Meanwhile, De Rossi begins his 11th season with the Giallorossi and the man the fans call “Captain Futuro” (The future captain) has done nothing but strengthen the love between him and fans and in doing so only made it pretty sure that he will go on to be Roma’s next permanent captain if he is to remain at the club when Totti retires. 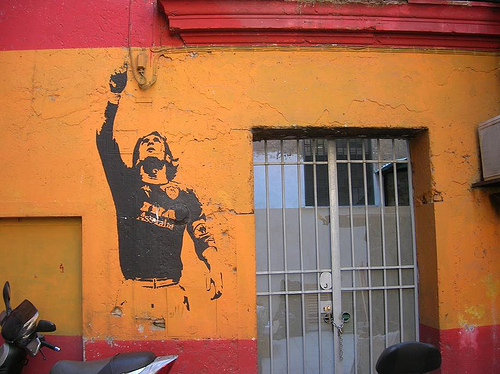 I leave you with a few quotes, one from Totti himself, which may help to explain his and De Rossi’s decision, whilst the others are testament to the ability of someone who could easily have played anywhere he wanted but he chose Roma and wore the shirt eternally.

“Winning one league title at Roma to me is worth winning 10 at Juventus or Real Madrid.” – Francesco Totti

“Above all on the eve of a match like this one, when on the other side, wearing a captain band on his arm, there’s a player like Francesco Totti. If we put together our goals scored, it’s over 500. If we sum up the years of career, wearing the same shirt – it comes up to 35. We won the World Cup together and those memories unite us forever… We have a great relationship with plenty of admiration on both sides even if we don’t call each other up. Francesco is great.” – Alessandro Del Piero

“There are many star players in Italy, but the only one I would bring to Bayern Munich would be Totti. I know him well and he deserves to win the Ballon d’Or” – Franz Beckenbauer

“Of course I know Totti is a fantastic player…Totti is the symbol of Roma.” – Sir Alex Ferguson

“I agree with Pelé, Totti is the best player in the world… Totti is the history of Roma.” – Luciano Spalletti (Ex Manager)

European Teams of the Week: Serie A, Bundesliga and Ligue 1

The five foremost features of Serie A: Week two