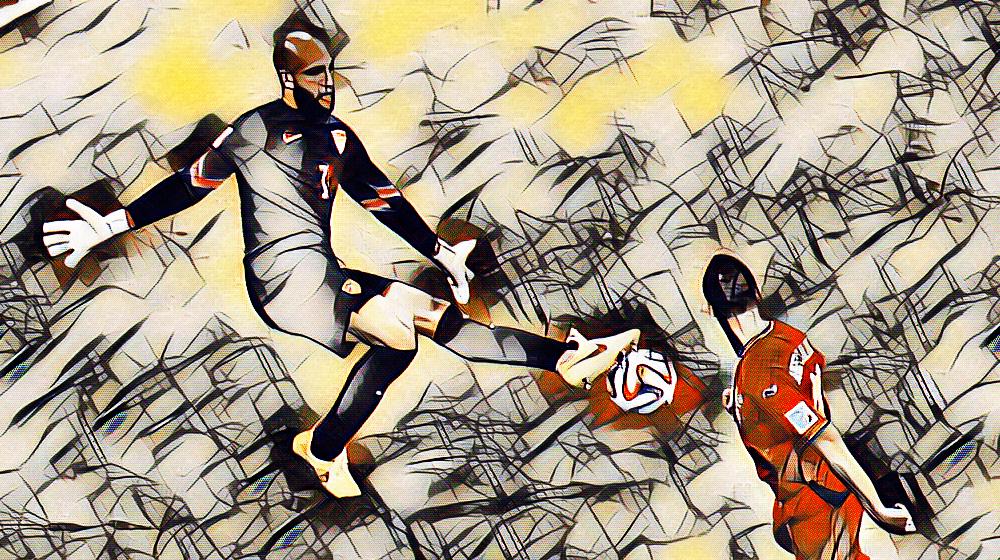 In July 2014, goalkeeper Tim Howard became a worldwide sensation overnight after more than ten years as one of America’s leading elite athletes. His record-breaking 15 saves for the United States in the World Cup against Belgium exhilarated a nation that had only recently announced itself on the world football stage after years of hibernation.

A television audience of 21 million viewers – larger than those of the NBA and NHL finals – watched Howard’s heroic display against the heavily favoured Belgians. He saved shots from some of the world’s greatest forwards in a star-studded Belgian side, whose squad featured 12 Premier League players, with his hands, arms, feet, legs, knees and even his hallmark bushy beard.

Suddenly Howard, then of Everton, who had toiled in relative anonymity compared to some of his rivals in the Premier League since his arrival in England in 2003, was the star of his very own Internet meme: “Things Tim Howard Could Save”, which included almost anything from Janet Jackson’s famous wardrobe malfunction to the Titanic. He even received a personal message from President Barack Obama:

“I do not know how you are going to survive the mobs when you get home, man. You will have to shave your beard so they do not know who you are.”

But it was the anonymity that Howard often preferred. A hyperactive boy from New Jersey with Tourette Syndrome, he defied the odds by not just becoming one of America’s greatest ever goalkeepers, but one of his country’s most recognisable and decorated athletes. His devout faith and love of all sports helped him cope with a disorder that manifested itself with speech and facial tics, compulsive behaviour, and extreme sensitivity to light, noise and touch.

Howard did not have much when he was growing up. Brought up by his single mother with his older brother, Chris, he lived in a small, one-bedroom apartment. Money was tight; his mom worked day shifts at a roadside furniture store, and by night packed containers at a factory an hour’s commute away. For the two brothers, sport was their only escape from a day-to-day routine of hours sitting still in classrooms and arriving home alone to very little.

Howard struggled through school; his disorder meant that he struggled to sit still, could not focus for long periods of time and desperately wanted to be anywhere but at his desk. He was always alert to the environment around him and any sounds and sensations were always amplified. He struggled to sleep, was startled easily around new people and on top of all that, was terrified of heights. All through his childhood it was only his mom that really understood his imperfections. She knew that sports were the only thing that mattered to him, and decided that he should try and play for a local team in a recreational soccer league aged 6.

Howard’s first team were the Rangers. He played outfield, and although he struggled with the technical aspects of the game such as shooting, passing and dribbling, his height and build even at such a young age meant that he was one of the best junior players in the area; he was known as the ‘Jolly Green Giant’. It was during those games as a youth on lumpy, dry and small football pitches that made Howard fall hard for football. His heightened awareness meant that he could feel the fluidity of the game much earlier than most children at a young age; he enjoyed how the game rarely stopped, and that there was never a moment’s rest apart from a small half-time break. Howard’s conscience of constantly wondering what other people thought of him also meant that he understood the importance of quick decision making, and how a moment of brilliance, or indeed indecision, could change everything when he ran up the pitch with the ball at his feet.

But his build and fearlessness on the pitch meant that he was always asked to go in goal. At the time he did not want to; that involved standing still, being away from the action and most importantly, meant that he could not score lots of goals.

He eventually caved in and played one half between the sticks and one half as a striker. Despite it being against his wishes at first, becoming the Rangers’ goalkeeper helped Howard both on the pitch, and more significantly, off it. A striker is one goal away from becoming a hero; conversely, a goalkeeper is one goal away from becoming a villain. He made mistakes, as every ‘keeper has, and it taught him how to accept what other people thought of him.

As Howard began to mature and come to terms with Tourette Syndrome, his love for football grew as he approached his teenage years. The first team he watched regularly was the great AC Milan side of the late 1980s on cable television. Whilst still a part-time outfield player, he studied Roberto Donadoni and tried to copy his every move after he came home from school. When the USA qualified for the World Cup in 1990, the first time in 40 years that Howard’s country had reached the world stage, he watched it on T.V. and followed the every move of Tony Meola and Tab Ramos, who were also from New Jersey.

Howard himself also began playing at a higher standard; his ability compared to children of a similar age was clear, especially to his mom. As a result, in 1991, she scraped together enough money to send him to a GK Club session, which was led by Tim Mulqueen. He was a goalkeeper coach at Rutgers, a prestigious football university. ‘Mulch’ worked with Howard week after week and unlike for the other, less-able goalkeepers at the sessions, did it free of charge. His rigorous training methods were famous in New Jersey for being notoriously tough. When a state team was put together, Mulch was tasked with picking the side and he chose Howard as his goalkeeper.

Howard’s stock was growing, and after performing admirably all over the East Coast, he was chosen for the Olympic Development Program. The ODP provided a pathway to the Youth National team – Howard represented his country at Under-15s, Under-17s and Under-20s level – but this was just the beginning for soccer in the United States.

The world was astonished when FIFA announced that the 1994 World Cup was to be held in America. The U.S. had the resources and money to put on a show, but it was still by no means a football country. In exchange for hosting the world’s biggest sporting event, FIFA decided that America had to launch its own professional leagues. This led to the creation of lots of new teams, including one close to home for Howard, the New Jersey Imperials. They were a part of the United Soccer Leagues, a step below MLS. With wages capped at just $24,000 a year for even the country’s best players, Howard took a leap of faith by skipping college in the hope that he would eventually play in the top flight by signing for his local side at 18 years of age.

He impressed for the Imperials, and it was not long before he was being chased by clubs in the MLS. He elected to join the MetroStars, who were expected to dominate the campaign after signing the previously mentioned Meola, Donadoni and Lalas. Howard was sub-keeper behind Meola, and when the latter was handed a one-game suspension for arguing with a referee, the MetroStars would have to rely on their number two goalkeeper for a home game against the Colorado Rapids. He performed admirably and most notably saved a one-on-one effort from Wolde Harris, one of MLS’ greatest goalscorers in the early years of the competition.

As Howard’s fame and popularity increased, by 2001 his syndrome became well documented and for the first time he opened up about the difficulties he faced. His story was publicised by the New York Times, USA Today and Sports Illustrated; he saw basketball star Mahmoud Abdul-Rauf as an inspiration, but after he had left the NBA in 1998, Howard decided that he no longer wanted to hide his symptoms and wanted to help start working with children who suffered with Tourette Syndrome. He needed help with the new responsibilities and important decisions that he now faced and looked to hire an agent; he chose Dan Segal, a lawyer, who encouraged Howard to try his luck in European football whilst still contributing to charity.

Segal helped Howard earn a trial at Feyenoord, but after that proved to be a dead end, he began the 2003/04 season with the MetroStars as planned. However, despite being at the time ranked the number four keeper for his national side behind Kasey Keller, Brad Friedel and Meola, Manchester United’s goalkeeping coach Tony Coton recommended Howard to Sir Alex Ferguson after watching videos of the American. United offered Howard a million-dollar deal at the end of the season that left Howard with the easy decision to move across the pond to England. His competitive debut was to be against Arsenal in the 2004 Community Shield.

If he did not fully understand the weight on his shoulders as Manchester United’s number one goalkeeper, Arsenal’s legendary invincible Thierry Henry made him fully appreciate the size of his task. When the Frenchman won a free-kick 35 yards from goal at the Millennium Stadium, Howard instructed his defence to organise a three-man wall covering most of the right side of the goal. But, as Howard soon found out after Henry’s looping, curling shot that flew inside the right-hand post out of his reach, the margin for error in English football is much slimmer than that in MLS. United won the tie on penalties, but Sir Alex was still not impressed by his new signing; The Independent’s summary of Howard as a ‘disabled goalkeeper’ did little to help matters.

As usual, Howard responded to the constant criticism and judgement in the only way he knew how to; by carrying on and enjoying the challenge. The dozens of matches that finished in tears for the Rangers and the relentless criticism from clueless school teachers who did not understand what was going through his mind had made him stronger and more immune to his doubters. He went on to enjoy three seasons at Old Trafford, before playing 414 games in all competitions for Merseyside giants Everton; he joined the Colorado Rapids in 2016. His 115 appearances for the American national team, which peaked at his awe-inspiring display against Belgium at the World Cup in Brazil, represented how far he had come from being a shy, six-year old midfielder on a small pitch in New Jersey.