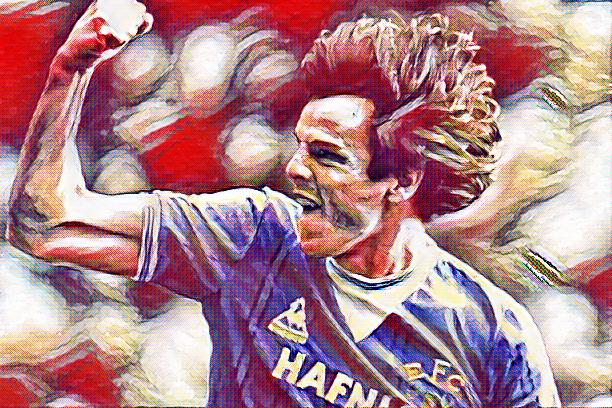 After yet another disappointing Derby defeat on Saturday, Everton fans now have endured eighteen years without a victory at Anfield. A whole generation of young blues has grown up without ever savouring the joy a victory at Anfield can bring. The weight of history bears heavily upon us. But we have been through similar experiences before and come out stronger. Let explain how Everton emerged from the doldrums of the Seventies to take Liverpool’s crown away from them in the Eighties and in the process ended the Anfield hoodoo.

Supporting Everton in the 1970’s was a decade of immense frustration. We had won the League convincingly in the 1969/70 season playing some of the best football I have ever seen. Everton were destined to be the team of the Seventies. It all changed one week in March 1971. On Wednesday, March 24th Everton lost on away goals to Panathinaikos in the last eight of the European Cup and then three days later lost two –one to Liverpool in the F.A. Cup semi- final at Old Trafford. Everton never recovered from this double blow. The following season, Alan Ball was sold to Arsenal and the Holy Trinity of Ball, Harvey, Kendall was no more. The next season saw Harry Catterick, the most successful manager of the 1960’s, out of a job. A decade which started with such hopes had quickly descended into despair.

Meanwhile, across Stanley Park, Liverpool were just starting to enter the most successful period of their history as League Championships and European Cups began to gather in the Trophy room. It was a desperate time to be an Everton fan as successive managers from Billy Bingham and Gordon Lee failed to halt Everton’s decline. From the start of the 1971/72 season to the end of the 83/84 season, Everton had won just one Derby match and not won a single game at Anfield. This dreadful run culminated in the humiliating five – nil defeat at home to Liverpool in 1982, with the added irony of boyhood Evertonian Ian Rush scoring four of the goals. There seemed no end to this never ending cycle of despair.

Despite an awful start to the 83/84 season, some hope slowly returned to the terraces of Goodison Park as the New Year approached. Howard Kendall had survived a vote of confidence and suddenly the team began to blend and find form. The signings of experienced players such as Andy Gray and Peter Reid began to pay off and a group of young players including Gary Stevens, Trevor Steven and Kevin Ratcliffe were starting to fulfil their potential. Everton made remarkable progress in the cup competitions, losing the final of the League Cup after a replay to Liverpool, followed by winning the F.A. Cup with a two- nil victory over Watford, Everton’s first trophy in fourteen years.

Everton started the 84/85 season by beating Liverpool one- nil at Wembley to earn our first Charity Shield since 1970. Kendall had added the highly-rated midfielder Paul Bracewell from Sunderland to the team. Could we dare to dream? Not quite, Everton fans were swiftly brought back to reality as the first two games resulted in two defeats. But, the date every Blue had pencilled in was the visit to Anfield on the 20th of October. Would this be the year to finally nail that Anfield hoodoo?

Everton approached the game in excellent form, having only lost one game in the last eight and had climbed up to sixth position in the League table. Liverpool, on the other hand, had made a stuttering start to the season and were six points and ten places behind Everton. Kendall had signed Pat Van Den Hauwe from Birmingham City two weeks previously to add some steel to the defence. You immediately sensed that not many opposition players would get the better of Pat.

The day before the Derby, a group of us, a mixture of Blues and Reds had met up in Liverpool City Centre for a few drinks prior to going to watch Elvis Costello play at the Royal Court. Towards the end of his set, he started to play the opening chords of “Turning the Town Red”. He was immediately greeted with an incredibly loud chorus of boos as the Everton fans in the audience made their feelings known. Elvis looked temporarily stunned. He stopped playing the song and turned to the audience in dismay. “How was I supposed to know you were all Blues?”. Many of us more superstitious Everton fans saw this as a good omen.

So the day arrived. Saturday, October 20th, 1984. Liverpool were the current League and European Champions. A win for Everton would be a real statement of intent. It couldn’t happen, could it? The atmosphere was building up around the ground and the city. This was in the days when Everton and Liverpool fans would still go to the match together and drink together in friendship groups. Any animosity was kept to the game itself. Very few fans wore replica shirts and no-one had heard of the hideous concept of a 50/50 scarf.

As was the custom in those days, lots of Everton fans occupied the Kop as well as the Anfield Road end. There seemed to be Blues fans everywhere. However, the biggest concern for them was the fact that Ian Rush, Everton’s nemesis, was about to return to play his first game of the season. He always scored against Everton! Even worse, Kevin Sheedy had still not recovered from an injury so Alan Harper would continue to deputise for him.

The Everton team that lined up was as follows:

A crowd of nearly 46,000 packed into Anfield for the clash. The Kop terraces formed their own natural division, with Reds on the right side and Blues on the left. It was absolutely packed. It was a boozy, heaving, sweaty mass of bodies, pushing and swaying to get a closer look at the action. Everton’s confidence in their ability was evident from the start. Everton were playing at the peak of their form. Southall was resolute in goal, Reid dominated the midfield and Van Den Hauwe marshalled the defence. Heath and Sharp constantly put Liverpool’s back line under pressure. Grobbelaar made an excellent one-handed save from a Gary Stevens free kick and at the other end, Southall denied Rush in a one on one. For once Rush was struggling to get into the game. Half time arrived, but still no score.

Liverpool were to attack the Kop in the second half. Everton braced themselves. Then three minutes after the restart, the game turned. Gary Stevens played a long ball out of defence up to Graham Sharp. He ran in behind Liverpool defender Mark Lawrenson to control the ball with his first touch and with his next touch lashed in a glorious twenty-five-yard screamer which left Grobbelaar grasping at thin air.

John Motson’s commentary on Match of the Day described eloquently what happened.

“Reid to Stevens, looking for Sharp, he goes behind Lawrenson and what a fabulous goal, an unbelievable finish from Graham Sharp. And the Evertonians have gone berserk. I haven’t seen a goal quite like that in a Merseyside Derby for years.”

Cue utter madness. Everton players mobbed Sharp as fans from both the Anfield Road end and the Kemlyn Road ran on to the pitch to celebrate. This included one bespectacled, beige jacketed, Evertonian careering onto the pitch, arms outstretched – a man who is always still referred to as the “Windmill” in Everton fanzines today. An Everton legend whose wild celebration is almost as famous as the goal itself.

Graeme Sharpe’s goal was arguably the best and most important of his career. The thousands who watched it on Match of the Day later that evening voted it as the goal of the season at the end of the league campaign. Even Liverpool manager Joe Fagan was gracious enough to admit. ”It was a bloody good goal, worth winning any game. Even now, the goal still regularly makes any poll of the top ten goals of the Eighties. So it was quite ironic that the scorer himself had considered putting in a transfer request the previous month when he had been dropped for a game at Newcastle.

Everton had entered the match full of self- belief and confidence. After the goal they controlled the remainder of the game, limiting Liverpool to a few half chances. Everton fans were loving this as they started to chant “Going down” vociferously to taunt their rivals who after this game had dropped to eighteenth place in the table.

Most sensible Liverpool fans had left before the final whistle as their stadium echoed to the sound of delirious Blues singing their hearts out. Most did not want to leave the ground. They had waited so long for this moment that they wanted to savour every second. Everton had won their first league derby for six years and won at Anfield for the first time in fourteen years. They had taken on the European and League Champions in their own ground and beaten them. The balance of power was changing.

The following Saturday at Goodison Park, in one of the best displays of football Everton fans have ever witnessed, Manchester United were humiliated five-nil. Just as one week in March 1971 had signalled the impending decline of Everton, so one week in October marked the rise of the new footballing power on Merseyside.