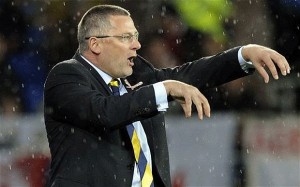 As William Congreve might have put it ”Heaven has no rage like love to hatred turn nor hell a fury like a journo scorned”. Craig Levein, always viewed as a media darling, is about to face a whirlwind. Those who favoured him will now turn on him. This retribution will not be pretty. It will be vicious. Those who previously led the procession for Levein will call for his head. If Scotland lose against Belgium, and even if they don’t, Levein’s coaching jacket is on a very shoogly peg. When Craig Levein got the Scotland job there was always the sneaking assumption he got it not because he was the right man for the job but because he met three criteria: he was cheap, he was Scottish and he was popular with the press.

Levin wasn’t my favoured choice in 2010. I despise the leaden thinking that suggests that the Scotland manager must be Scottish. If the best man for the job is Scottish, give him the job. If the best man for the job is a foreigner, sign him up. (The Republic of Ireland haven’t suffered with managers like Charlton and Trapattoni and, for all the bluster, England have rarely been so relentless in qualifying as they were with Capello). I remember Gordon Smith saying that some of the biggest names in football were interested in the Scotland job. One wonders why some of those names – if they really were interested – were overlooked for Levein? That said, I argued at the time whoever got the job had to be given time to build a Scotland. Given the group that Scotland found themselves in for the 2012 European Championships most grown-ups realised that qualification was wishing on a crescent moon. This Spain, lumped in with Levein’s Scotland, were always going to dominate the group and Levein was always going to be slugging it out with the Czech Republic for 2nd.

Typically, such is the importance of glorious failure to the Scottish psyche, Levein’s team played arguably their best football against the imperious Spain. A 3-2 defeat in Hampden and a 3-1 defeat in Spain belies a morose and frustrating campaign. Only Scotland could conspire to score as many goals against – arguably – the greatest team ever to play the game as they did against Liechtenstein. Only Scotland could score more goals against Spain in one game than the combined powers of Italy (twice), Portugal, France, Croatia and Ireland managed at the entire European Championships. Only Scotland could scale such highs whilst, generally, playing so poorly.

Most of us acknowledged that Scotland were unlikely to qualify for the European Championships and, therefore, the manager should be given time to build.

I was one of those. I’ve changed my mind.

We shouldn’t judge a Scottish manager by what he can do against the big teams. For all my criticism of the concept of glorious failure, Scotland were always likely to perform against Spain. How could they not? They had nothing to lose, everything to gain. It isn’t against Spain we should judge Scotland and Levein. It is the dross they served up in the other games.
And it was dross. Levein’s results in competitive matches are worse than Burley’s. They are worse than Vogts. Levein has a better crop of players available to him than either of his predecessors (NB: Vogts – P13, W5, D4, L4. Burley – P8, W3, D1, L4, Levein P11, W3, D4, L4).
It truly was dismal. Let me count the ways.

I could forgive most of that. Not Prague. I can never forgive Prague. But I could forgive most of it. There were, whisper it, some showings of improvement towards the end of the last campaign. That – despite the return of the sumptuous Steven Fletcher and the criminally under-rated Darren Fletcher – doesn’t seem to have continued into this campaign.

Yes, there were some small improvements towards the end of the last campaign but there is a feeling that the current personnel – a personnel that are demonstrably better than recent vintages (Lord knows what Vogts would have done with this batch) – aren’t playing to the best of their abilities. The 2012 group was hard but second place was eminently achievable and it wasn’t achieved. It wasn’t achieved because of the decisions of Levein. Second place, in a group containing Serbia, Belgium, Wales and Croatia, is a long way ahead of Levein’s capabilities.

There was no shame in drawing to Serbia at Hampden (Serbia are a fine side) but they should have beaten Macedonia. For all of the gnashing of teeth about the referee against Wales there is no doubt that Wales out-played Scotland and were, on balance of play, the better side. Two points from a possible 9 is dismal stuff with two games at home already played and with the two best sides in the group still laying in wait. Moreover, there doesn’t seem to be a clear vision of what sort of team Levein wants Scotland to be? Rodgers, at Liverpool, is having a hard-time of life at present but there is – at least – a clear vision of where he wants to get to. Some may argue that Levein is a pragmatist with a limited hand. There is room for pragmatism in football but there is room for vision too. And, finally,  we have Levein himself. Levein is a clever enough man and like many clever enough men he over-rates his ability. Such men don’t view criticism the way most do. They don’t behave like most do. When things aren’t going their own way, this is a destructive mix as this sort of cleverness is the natural bedfellow of stubbornness.

To Levein, his sub-Mourinho approach against Prague wasn’t an error (which it was) but rather something that didn’t quite work – but for the wind, the rain, and the bounce he’d have got his point. Similarly, the way he has handled the Fletcher affair has been monumentally stupid but he will think he has handled it well. That he has proved a point.

None of the Home Nations are blessed with a glut of fine strikers at present.    Fletcher is clearly in the top five British strikers playing the game at present. Levein, a proud and clever man, should have walked on his hands over broken glass to get Fletcher back in the team. Consider, for instance, how Ferguson forgave Rooney for his nonsense in 2010. Sometimes managers need to swallow their pride for the good of the team and discipline can go hang. For the point that Levein has proved, he may well have cost us 2nd place in the last group (we finished 2 pts behind the Czechs). For the point that Levein thinks he has proved, Fletcher is back in the team and was superb against the Welsh.

With all that in mind, and with a heavy heart, I think Levein must go. He might, somehow, outsmart the likes of Kompany, Vermaelen, Vertonghen, Dembele, Defour, Hazard, and Witsel. That would be entirely in keeping with Scottish football and Levein’s history. I cannot see Levein inspiring this talented bunch of Scottish players to much else in the next two years. Moving forward, let us hope we hear more about who the best man for the job is in the coming weeks. Let’s hope we aren’t cajoled by the hoary old cliches – ‘he knows the league’, ‘the players respect him’, ‘he understands Scottish football’. I hope we hear even fewer lines like we need Graeme Souness because ‘he knows how to win’. The best man for the job may well be a Scot. It may well be that the best man for the job is an Englishman or a German. Whoever it is, I suspect he’ll do better – in the short-term, the medium-term, and the long-term – than Craig Levein will.