Skip to content
3 Comments on Time is up for Neil Warnock at Leeds UnitedPosted in English By By Far The Greatest TeamPosted on February 18, 2013July 11, 2017Tagged Leeds United, Neil Warnock 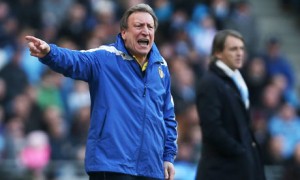 Nobody could have expected Leeds United to get a result against Manchester City yesterday but Leeds fans were entitled to hope they could leave the Etihad without being embarrassed. “You’re nothing special, we lose every week” the fans chanted, making light of the situation, but nobody in the away end will have been comfortable with the 4-0 thrashing dished out by a club that always finished below Leeds in the table ten years ago.

The FA Cup produced the traditional magic in the previous round when a resilient Leeds side managed to match Spurs and pick up an impressive 2-1 victory. However, since that clash on a crisp January afternoon a lot has changed. The fans have had enough of desperate football and a lack of results, including the 1-0 to Boro has resulted in the majority of Leeds fans asking for Mr Warnock to pack his bags.

This week sees Warnock celebrate one year in charge at Elland Road but the overriding question is what has changed?

I was one of those fans who this time 12 months ago was pretty pleased – we’d just signed a manager with a proven record and he seemed to understand the connection with the disillusioned fans. We had an outside shot at the play-offs and we were told to forget about it and be ready for the big push. If you dabbled in championship betting, then Leeds surely looked like a good candidate to go up. Well the big push for the play-offs has stagnated and it’s left many fans asking when the new owners will see the light of day and get a new man at the helm.

His interviews on the radio were a breath of fresh air compare to the generic answers that Simon Grayson had begun to use towards the end of his tenure. He promised us a battling team who would never play as badly as we did against Nottingham Forest. More importantly he was promised the support from above which would help him achieve our dream and his record breaking 8th promotion. That hasn’t arrived and at times you have to feel for Warnock and what he’s had to deal with off the field. The longest takeover in history was probably as frustrating for him as it was the fans but with three months to go it really is time to call it a day.

I don’t blame Neil Warnock, nor does all the blame go on the board. Quite simply it just hasn’t worked out. We need a new vision to look forward to, the fans need to buy into it and once and for all everybody has to pull in the same direction. After all we are supposed to be Marching on Together!