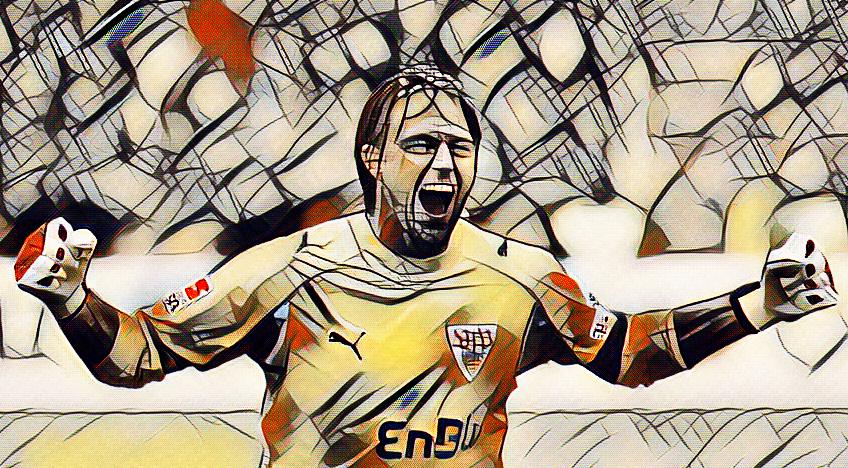 Timo Hildebrand is a Bundesliga winner and record holder as well as a World Cup and Confederations Cup bronze medallist with Germany. He speaks exclusively to By Far The Greatest Team about the highlights of his career and the life after.

Timo decided to put his gloves away in March last year after being without a club for a year following his release from Eintracht Frankfurt in January of 2015. He can look back on a great career that includes winning the Bundesliga with VfB Stuttgart in 2006/07 season which he describes as “a dream come true”, winning the Spanish Cup with Valencia in 2008 and keeping 100 clean sheets in the Bundesliga across 301 games, to name a few.

He claims he’s always been a goalkeeper ever since he started playing football in his home town of Worms. He made his Bundesliga debut for Stuttgart in 1999 in a 2-1 win against Freiburg, having spent a few seasons at Stuttgart II, and was the first-choice goalkeeper the following season.

“In my home town I started in goal. But our team was so strong, so I decide to play sometimes in the outfield. My biggest talent was in the goal, however, so I stayed in this position.

“It was amazing to play for my club in the Bundesliga. I was very young so I was quiet nervous to play my first game.”

Becoming Stuttgart’s first choice was a huge breakthrough for Timo and he didn’t give up the spot in goal for seven seasons. In those years he achieved a record that still stands to this very day. A record not even Manuel Neuer and Bayern Munich has beaten, although if anyone will, Timo believes the Bavarian giants will be the ones to break it.

The longest clean sheet in Bundesliga history. An amazing 884 minutes without conceding a goal. When the run finally ended it was a ball that looked like it might have been over the line behind the goal before Werder Bremen’s Angelos Charisteas put it in the net. However, losing the record was not the most annoying thing to happen that season according to Timo.

“At the end of this really strong season we lost our final match in Leverkusen and the third place, which would have been a Champions League qualifier. That was really annoying!

“I think Bayern Munich will break that record at some point, they are so strong and have such a good squad. So I think when a team will beat it, Bayern will do it.”

Watch the run come to an end in the video below:

Timo was lucky enough to get to play for his beloved Germany. He got his international debut against Romania in 2004, coming on to play the second half, and was part of both the Confederations Cup squad, where he got one game, and the World Cup bronze winning squad, where he was the only player to not take the field for Die Mannschaft. He ended his international career with only seven caps for Germany.

He was unfortunate enough to end up behind Germany greats Oliver Kahn and Jens Lehmann in the pecking order but claims he learned a lot from them and he really enjoyed taking bronze on home soil in the 2006 World Cup despite not featuring. But he admits he would have liked to play more, and that he would have, had it not been for Kahn and Lehmann.

When Kahn retired after the World Cup Timo became the second choice behind Lehmann and many saw Timo as the natural replacement for Lehmann. But new coach Joachim Löw chose Rene Adler and the late Robert Enke for Euro 2008 despite playing Hildebrand in a few friendlies and qualifiers leading up to the tournament. Timo’s last match for Germany was the 3-0 loss to the Czech Republic in the qualifiers for the Euros in October 2007.

“These two [Kahn and Lehmann] were both two of the best goalkeepers in the world. So it was a big pleasure to train with them and learn from them.

“It [the 2006 World Cup] was one of the biggest moments in my active career. The crowd and the whole time during the World Cup in our home country was incredible.

“Sure I would have played more. I had to wait all the time to get my chance, but when Oliver Kahn retired, Joachim Löw took another choice for the goal in Germany. It [being left out for the Euros] was really tough for me and the first big shock in my career.”

Nowadays he works at an agency working with live-events and his free time is spent with his kid, but Timo also wants to give something back and recently worked with a charity called Balkan Route Stuttgart:

“I´m working at TAILORMADE – an agency for live-campaigns as an ambassador. Most of my free time I spend having a lot of fun with my little kid.

“Life was, and is, really good to me. I had the great privilege to live my dream. Now I want to give something back and by supporting social projects. The Balkan Route Stuttgart is a charitable organisation, that helps refugees – especially children – stranded in Turkey which can´t go back to Syria, with food, sanitary projects and other things such as education.”

Timo will also be working as a commentator when the Bundesliga season starts up again as the German branch of Amazon has acquired the rights for audio coverage of the Bundesliga and 2. Bundesliga. He has been keeping a close eye on his former team Stuttgart as well and he thinks his old position is well taken care off with the arrival of Ron-Robert Zieler from Leicester and Mitch Langerak already at the club as Die Roten prepares for their return to the top flight after winning the 2. Bundesliga last season.

“That’s a really new experience for me. Amazon will go new ways in football and they need some experts to explain and accompany the audio streamings. But I think I can benefit from my appearances as expert in several football tv shows in Germany.

“Stuttgart is my second hometown. I started my professional career at the VfB and won the German championship there. I love this club. So I have a great relationship to the people and the team there. I think Zieler is a really good goalkeeper, but I also think Mitch Langerak did an amazing job last year.”