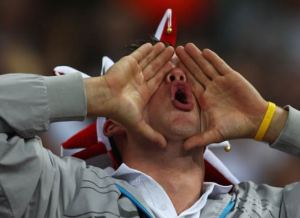 The act of booing is a childish one. You see booing on Jerry Springer or Jeremy Kyle, or in the playground at primary school. Grown adults, sometimes thousands of adults in unison, getting together to go ‘booooooo’ when the referee makes a decision you disagree with is fairly stupid when you think about it. A childish, silly, petty act that achieves nothing except make men, women and children sound more like farmyard animals rather than their normal human selves.

As a Spurs fan, I’ve seen far more debate about some fans booing at half and full time during our 1-1 draw with Norwich than the actual performance. The vast majority have been saying how disgraceful it is, how you should ‘support the team’, ‘back the players’, ‘will your team on’ etc.

On fans booing on Saturday, I personally think it was ridiculous. Three games into a new season, with a new manager, a new style of play and our best player (Lil’ Luka Modric) having left to take the Real Madrid shilling, there are going to be teething problems. It’s very unlikely to have a team after such seismic change click immediately. Besides, despite a poor performance and a surprisingly good performance from Norwich we almost won and saw our new signing Mousa Dembele score a cracking goal. To start booing two or three games into a new season is farcical.

I find this chorus ‘you must always support your team’ to be quite depressing. As far as I’m concerned, considering the amount of money people pay for tickets, the amount of money it costs to travel to games, buy a programme and perhaps a half-time beverage, fans have every right to boo and express their displeasure, whether it is merited or not.

If you pay to see a football match, contributing to paying the wages of players, managers, shareholders and board members who you feel are not up to the job, you have every right to express your unhappiness. Especially in an era where clubs and the people who run the game have increasing contempt for supporters, showing this by charging higher ticket prices and having more kick-offs that suit TV schedules and not fans travel arrangements.

In this respect, the fans are like any person who puts money into a business. If you put money into a business, you don’t blithely support whatever the head honcho is doing. You ask questions, express your own opinions, perhaps recommend changes. You don’t get told by colleagues to ‘support the company whatever happens through thick and thin’. If you do, you shouldn’t be so gullible as to believe it.

That’s just the financial aspects. There are the emotions that come with supporting a club too, the importance a team carries in the hearts and minds of its supporters. The fact that football teams, to varying numbers of supporters, mean everything to them. Those fans who go to every game, home and away, have their lives effectively controlled by fixture lists and the bar on the computer screen that ever so slowly loads to confirm their booking of tickets for that League Cup game away to Carlisle in midweek on a cold night in September. The club and how well the club are doing is a massive part of a select few people’s lives.

When football clubs mean so much, when you care passionately, when you’re delighted at every win and distraught at every defeat, you surely have a right to express your opinion, which includes booing at games. Football clubs are for the fans, not just to line the pockets of players, managers, physios, chairmen and whoever else works at a football club.

The main argument from fans who are condemning the booing that took place on Saturday seems to be that it’s not helping the team. In yesterday’s case, I agree. Booing the team simply gives more ammunition to the press who can’t wait to slate Andre Villas-Boas and laud St Harry of Redknapp, along with not boosting the team’s confidence, something Spurs currently don’t have much of.

But just because personally I disagree, does that mean I should condemn everyone else? Of course it doesn’t. Everyone has different opinions, but in Britain mostly we’re tolerant of people’s different opinions, whether it be on politics, religion or whatever. Those who with an air of righteousness say fans who boo on occasions are ‘not true supporters’, what gives them the right to decide who are ‘true supporters’ and who’s not? Not booing when others do boo doesn’t mean they’re better fans. It just means they have a different opinion, not necessarily a better opinion.

Booing may not have been justified against Norwich, but on occasions I think it is merited. If you go to a rock gig, or if you see a comedy show, you boo if you don’t like the performance. If the band who were supposed to be good turn out to be useless, they get booed. Same with a stand-up comedy show. If you pay money to see something less funny than a hernia, you boo. I don’t see many people complaining about this. And for the argument that paying for a football match entitles you only to see a football match and nothing more, well at almost any other show you’re allowed to express your displeasure. So why not at football matches?

On occasions where your team is playing poorly, playing as if they couldn’t care less despite fans paying for their tickets and contributing to players and coaches wages, I think booing  is justified. It’s not a hard and shut case that booing is always bad. It isn’t. If fans are being taken for a ride by uncaring players and/or chairmen who are running clubs into the ground for their own financial benefit, I don’t think booing is such a bad thing. They need to know that what they are doing isn’t acceptable and the ‘customer’ isn’t happy. ‘You should always get behind the team’. Even if the team don’t look like they care? Even if they’re taking your money to perform poorly?

In most cases, is booing justified? No. Is booing an edifying act for grown adults to engage in? Probably not. But does me having those opinions mean I’m right? Absolutely not. It simply means I have a different view, something we’re all entitled to.

Booing I may not agree with, but I do agree with the view that fans should be able to boo and say what they want as long as it’s not offensive. Of course the fans should see it as a priority to cheer their team to victory but the club belongs to us more than it ever will the players, we will be here long after they’ve gone, so we certainly have the right to let them know if they’re not doing the shirt justice.