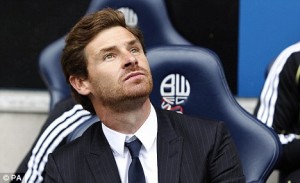 English journalists, particularly the tabloid ones, already have a well-rehearsed guide on what to say about Andre Villas-Boas. That he’s arrogant. That his only achievements were ‘lucky’ in a league Porto always win. That behind the tactics talk and gruff voice he’s actually clueless. That he’s a terrible man-manager. That he’s too young and inexperienced. And that he’ll be a failure at Tottenham like he was at Chelsea.

If these journalists were to actually do their jobs properly and not still be under the powerful spell of clichés cast by footballing Voldemort Harry Redknapp, they’d have noticed differences between Chelsea AVB and Tottenham AVB. Where the young Portuguese coach has learned lessons and done things differently.

The biggest difference is the way he has dealt with the press. Despite getting some ridiculous treatment from the press pack, whether it was the ‘AVB has three games to save his job’ story doing the rounds after only three league matches in charge or the furore over Villas-Boas’s supposedly bad man-management not putting Hugo Lloris straight in the side ahead of a man who’s started over 300 consecutive Premier League games, he has by all accounts been more accommodating with the press than he was at Chelsea.

In some press conferences this season, he has actually overrun in terms of time, just to make sure he answered every question asked of him. Managers’ talking more to the press than is required of them is very rare indeed. He’s talked at length and with passion about his footballing philosophy, about how and where he will improve Tottenham and coax them into achieving even better results. The fact that an hour of talking about his views on football will result on a few lines in the next day’s paper about how he’s ‘under pressure’ hasn’t deterred him from being more press friendly yet.

Compared to his predecessor, Villas-Boas talks far more about tactics and strategy. After the frustrating 0-0 draw with Lazio he talked of how he told Clint Dempsey and Jermain Defoe to pressurise Lazio holding midfielder Christian Ledesma, to force them to build attacks through their goalkeeper and not through their midfield. Redknapp would talk in soundbites, saying we ‘played fantastic’, ‘we were terrific’, ‘we didn’t kill the game off’, ‘my lack of squad rotation was largely at fault for blowing a 10 point lead over Arsenal with 13 games left’. Well, maybe not the last quote.

This makes a difference from his Chelsea days, when Villas-Boas at one point said there was an anti-Chelsea crusade in the press and seemed to be about as helpful to the press as Tory Chief Whips are to the policemen outside No 10 Downing Street. He’s, if not on a charm offensive, then certainly treating the press like friends rather than enemies, even if so far he hasn’t got much in return in the way of praise.

On the pitch though, Villas-Boas has obviously learnt from his Chelsea days. For all the talk of how he’s making radical changes at Tottenham, the change in tactics and the way Spurs play hasn’t been as extreme as most people would think. The high defensive line that he utilised at Porto and his early days at Chelsea hasn’t been seen yet in a proper fixture.

At Chelsea, he implemented this high line from day one, despite it being a bad fit for his personnel. John Terry was about as suitable for a high defensive line as Aaron Lennon is for the Olympic Shot Put and basically undroppable because he’s England’s (No Longer) Brave John Terry, yet Villas-Boas used it anyway. The 5-3 home defeat to Arsenal, which managed to pull off the oracle of making Theo Walcott look like a world class winger, showed the shortcomings of a high defensive line with slow defenders.

At Tottenham, despite having quicker defenders, the defensive high line is yet to be used in a competitive match. Pre-season saw a few goals conceded through the high line being prone to opposition attacks getting in behind the defence. Villas-Boas, perhaps learning from his Chelsea days, simply hasn’t implemented this defensive high line in the serious games. Almost certainly for the better.

He’s also taken steps to be a better man-manager compared to Chelsea, where even placid types such as Frank Lampard engaged in histrionics and made clear their displeasure at Villas-Boas. There were reports of players being dropped and not having it explained to them why they were sitting on the bench rather than playing on the pitch. You got the impression he couldn’t have alienated the players more if he was an actual alien.
Well at Spurs he’s been far less prone to chopping and changing the team, and has also taken care to keep older members of the squad like Jermain Defoe and William Gallas in the first team. Someone like Defoe, who has shown in previous seasons his willingness to express his displeasure at not being a first team regular, has got an extended run in the side despite the arrival of Emmanuel Adebayor.

It must have been tempting for Villas-Boas to put Adebayor in the first team. Despite Defoe scoring four goals from the opening five games of the season, his tally of five total passes at home all match against QPR show that he’s still unsuited to playing up front on his own. Adebayor is the all-round better player and was excellent for Spurs last season.

But Villas-Boas, perhaps wary of upsetting a senior player, has given Defoe an extended run in the first team, managing to placate Adebayor by saying he wasn’t fit enough and needed to get acclimatised in training to the style of play. Adebayor’s recent hamstring injury will further give Defoe a first team berth.

With Gallas, an occasionally volatile character who at various points threatened to score own goals for Chelsea in a contract dispute and went into a fairly mad strop after Arsenal’s 2-2 draw with Birmingham (the game where Eduardo saw what was his ankle turn into a mesh of bones vaguely stuck together) he has consistently picked him when Steven Caulker, a younger, quicker and extremely talented centre half is waiting in the wings. For the same reasons perhaps, Brad Friedel is continuing to start in goal ahead of Hugo Lloris.
Of course, this may be nonsense and it may be Villas-Boas not trying to get older players on his side but merely picking the team he thinks is best. But the fact senior players likely to carry more influence in the dressing room are either getting picked or in the case of Rafael Van der Vaart were amicably sold indicates that Villas-Boas intends to be more diplomatic at Spurs and a better man-manager. The fact he’s dealing with players who don’t have Petronas Tower sized egos also helps.

You’d expect over time, as the Spurs squad get further used to Villas-Boas that he will slowly phase out the veterans in favour of the younger players. The likes of Lloris and Caulker may well be regular starters very soon. They may have been the better players from the start. Villas-Boas may be losing some early battles to win the war, gaining the trust of the dressing room leaders by giving them more playing time, even if it means his best eleven players not playing. Whether this is the right way to go or not is debatable, but if true it shows he’s learnt from his time in West London.

Andre Villas-Boas has a tough job at Tottenham. His predecessor, for all of his faults did a t’riffic job and gave Spurs some of their best moments in decades. Villas-Boas will be expected by the press and some fans to match those achievements, if not eclipse them. And he has to do that with Luka Modric and Rafael Van der Vaart having been sold, Ledley King retiring with the insides of his knee looking like Hiroshima after the bomb fell and a press who loved his predecessor but don’t love him.

But what he’s shown so far at Tottenham is that he’s learnt from some of his mistakes at Chelsea, and that he isn’t the arrogant, aloof tactics nerd with ‘borderline Asperger’s (Ian McGarry coming up with that insensitive and unnecessary remark). He’s realised the mistakes he’s made, is trying not to make them again, and if he fails at Tottenham it’s unlikely to be because he’s repeated the mistakes he made at Chelsea, on and off the pitch.

STATS: Tottenham Hotspur’s Defoe has more shots than anyone and QPR’s Ferdinand with the most interceptions