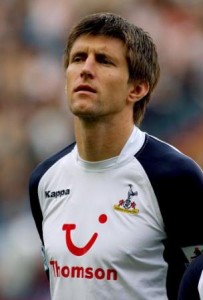 With less than a week until Transfer Nuclear Armageddon (or Transfer Deadline Day) is upon us once again, what Tottenham Hotspur must do is not so much dream of the future, but like any good historian, learn the lessons of the past.

That’s because there was a time seven and a half years ago when Tottenham in the summer transfer window, like now, were growing increasingly desperate for a striker. In August 2005, Spurs, re-emerging under Martin Jol and Chris Hughton, had Robbie Keane, Jermain Defoe and Mido as their batch of forwards. With Keane and Defoe having long balls flying over their heads at regular intervals and Mido battling his weight more than opposition central defenders, reinforcements were needed. With money scarce and time even scarcer, Jol and Daniel Levy made their transfer plunge. The centre forward they purchased? Grzegorz Rasiak.

Rasiak only cost £1.5m and was quickly shipped out on loan to Southampton. He only made eight appearances and statistically is a mere footnote in Tottenham’s rich, varied and only one time Lasagne affected history. But in those eight scoreless appearances, he was so bad and so woefully out of depth as to give fans that saw him play the football supporter’s version of Post-Traumatic Stress Disorder.

What Tottenham must not do in the last week of the transfer window is make the same mistake again and buy another striker of his ilk. A bad striker who will cost the club time, money, poor on-pitch performance and maybe even dressing room harmony will be far more costly both literally and metaphorically than keeping with the status quo.

Last season, Tottenham’s transfer dealings in January proved this point. Louis Saha after a good start at the club disrupted the team tactically and struggled to score goals, while the departures of Vedran Corluka and Steven Pienaar on loan left Spurs with a crippling lack of squad depth when tiredness and fatigue viciously kicked in. As unlucky as Spurs were to miss out on the Champions League due to Chelsea’s stunning victory in the competition, the fact they finished 4th and not 3rd was entirely self-inflicted.

The yearning for a striker this January is understandable. Spurs only have two genuine strikers in their first team squad, and of those two Emmanuel Adebayor has barely played this season and when he has played has shown all the effort and application of a spoilt teenager on a Monday morning. The only game he applied himself for, against former club Arsenal, he was sent off after 18 minutes for a tackle so stupid even Lennie in Of Mice and Men would have thought better of it.

He signing permanently for Spurs after being at the club on loan last season has seemingly taken away his effort and application on the pitch. Given his history of not pulling his weight at Manchester City and Arsenal, you can’t say Spurs weren’t warned the same thing would happen when he signed a long term deal at the club.

Jermain Defoe, for so long denied a consistent run in the Spurs starting line-up has almost by default been granted a regular berth in the team. And while his tally of fourteen goals before the end of January is impressive, he has only scored one goal in his last eight games while his all round play has at times left a lot to be desired.

His performance at QPR at home earlier this season was his season in microcosm. He only had five touches all game, was poor throughout but tapped home a rebound he could barely miss to put his name on the scoresheet and encourage the pundits who are too lazy and sure of their opinions to watch games to loudly sing his virtues. The amount of pundits who have said of Defoe this season that ‘he’s on fire’ makes it amazing that at no point has Defoe literally been on fire.

The best forward Spurs probably have at the moment is Clint Dempsey. And he’s a midfielder. An alternative to Defoe and Adebayor, youngster Harry Kane, is on a season-long loan to Norwich. A striker is needed if Spurs are to carry the momentum gained from their last minute equaliser against Manchester United and their current run of only one loss in twelve to a top four finish at season’s end.

As badly as Tottenham may want a striker though, there are few, if any top class strikers currently available to them. The likes of Falcao, Fernando Llorente and Mario Balotelli are too expensive and frankly looking to sign for clubs of a higher calibre than Tottenham. Whether Spurs would want someone as eccentric and potentially destabilising as Balotelli anyway is doubtful.

The strikers Spurs have been linked with are hardly people who are going to set fans pulses racing. Leandro Damiao has been linked with Spurs for an age without ever coming close to signing, while tabloid gossip this week has linked with the club with Celtic forward Gary Hooper, who a few years ago couldn’t even make the Southend United starting XI.

While he has an excellent goalscoring record at Celtic and has scored in the Champions League, the Scottish League is of an ever lower quality and is now truly the uglier, wrinkled, drug addicted sister to the attractive, shallow princess that is the Premiership. For every Henrik Larsson and even Nikica Jelavic who were top goalscorers playing in the SPL, there’s Georgios Samaras and Kris Boyd, people who failed in England but have had success in Scotland.

It’s hard to escape the feeling that Hooper, though undoubtedly a striker of some potential, simply wouldn’t be good enough for a side now a regular in and around the top four in the Premiership. Another striker Spurs have supposedly been interested in, Matej Vydra of Watford, may have scored eighteen goals for Watford this season but didn’t make the grade at Udinese and after only half a season in the second tier of English (and occasionally Welsh) football surely lacks the sufficient experience.

Those two names are indicative of just how low Tottenham are having to look and how desperate they’re increasingly becoming to sign a striker who can to add an ever improving side. The defence has improved greatly since Hugo Lloris replaced Brad Friedel in goal, while the midfield was one of the best, if not the best in the league with Sandro in it and even without him will be strengthened by the arrival of Lewis Holtby from Schalke.

The forward line is the only real chink in Tottenham’s increasingly resilient armour. If it isn’t bolstered and improved, Spurs run the risk of being short of the necessary firepower when Arsenal, Everton and others attack in the hunt to finish in the top four. If it is bolstered but only by a rotten apple that’s worse than Defoe and Adebayor, the destabilising effect could be costly.

Franco Baldini Needs To Be Ruthless At Tottenham Hotspur

How the game was won – Tottenham Hotspur vs Manchester City