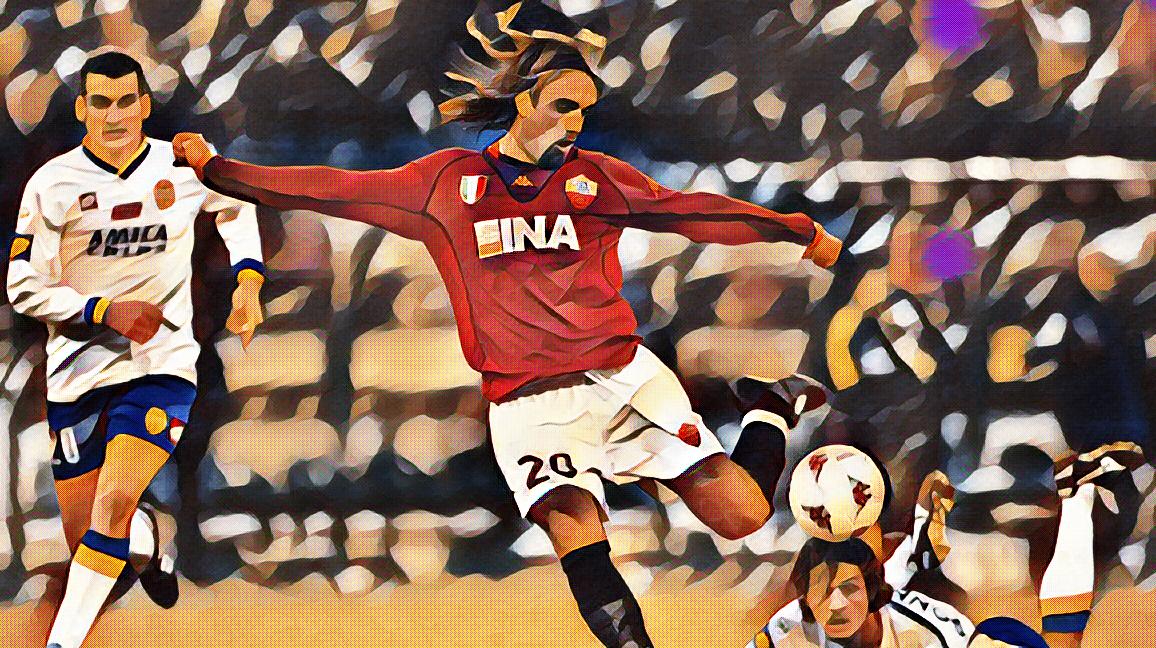 Roma have garnered a reputation for finishing second in Italy, always the bridesmaid, never the
bride. In recent years they’ve been unable to overcome to the unstoppable behemoth that is Juventus,
before that it was Inter Milan. However, in one season at the turn of the century, under the
stewardship of Fabio Capello, all the pieces fell into place and the Giallorossi secured their third ever
Serie A, at a time when the league was at its most competitive.

Capello took the reins in the Italian capital in 1999, some thirty years after he had joined them as a
player. Then Roma president Franco Sensi hailed Capello as a winner, believing he was the man to
bring success to the club. Barring the Coppa Italia win in 1991 and the emergence of one Francesco
Totti, there had been little to write home about for the fans of the Giallorossi in the nineties.

In Capello’s first season they finished 5th and qualified for the UEFA Cup, not a disaster by any
means, however it was tempered by fans having to watch city rivals Lazio lift the Serie A trophy, only
further emphasising their lack of recent success in the league.

Capello felt the team needed improving to compete at the top, he set about building a new spine, in
the shape of a centre back, central midfielder and a world-class forward. He tried to see to the latter
by chasing Ruud van Nistelrooy in the summer of 1999, but the move was scuppered by injury and
Manchester United. In the summer of 2000 Capello set about filling the gaps, signing Walter Samuel
from Boca Juniors, Emerson from Bayer Leverkusen, and Gabriel Batistuta from Fiorentina.

Batistuta, or “Batigol”, had been hitting the net for the Viola throughout the nineties since his arrival
from Boca Juniors, scoring 207 goals in 332 appearances. His reputation was fearsome, Diego
Maradona has called him the best striker he has seen play the game. Batigol was a complete
forward, hard working for the team, able to hold up play and contribute assists, and his biggest
strength by far was his finishing ability. Either foot, from any angle, Batistuta could absolutely
hammer the ball goalward, and goalkeepers were often powerless to keep it out.

Batistuta had dreamt of bringing the league title back to Florence. Fiorentina did everything they
could to try and hold on to the Argentine, but Batistuta knew his talent warranted silverware. At the
age of 32, Roma paid €36.2million (or 70billion lire) to bring him to the capital, which remains the
highest fee paid for a player over the age of 30. It proved to be money well spent, at Batigol went on
to score 20 times in 28 Serie A appearances.

The team Capello would use for the majority of the season set up in a 3-4-1-2 formation; Jonathan
Zebina, Aldair and Samuel as the back three; Vincent Candela and Cafu as wing backs; Damiano
Tomassi with either Emerson or Cristiano Zanetti alongside him in midfield; Marco Delvecchio and
Batistuta up front with Totti in behind.

At least, that was how it began. Up front, Capello was presented with a dilemma. Batistuta was an
obvious start, his partner was not. Capello initially preferred Marco Delvecchio, a big target man,
industrious, working hard for his teammates, but his scoring record wasn’t exemplary.
Vincenzo Montella was the option from the bench, however his scoring record after being brought
on prompted Capello to give him a chance in the starting eleven. The second half of the season saw
Totti, Batistuta and Montella lead the line, one of the most fearsome attacking trio’s anywhere in
Europe at that time and over the last twenty years.

Roma started the season well, winning eight of their first ten in the league, the only blots being a 0-0
draw away to Perugia and a 2-0 loss away to Inter Milan. Matchday 11 brought the first Rome derby,
where they were playing “away” to Lazio at their shared home, Stadio Olimpico. Lazio’s form going
into the derby was chequered, having only won five of their ten matches, but they still boasted an
impressive line-up, which included Alessandro Nesta, Pavel Nedved and Hernan Crespo.

The game was a cagey affair and was decided by an own goal midway through the second half.
Batistuta played the ball out to Cafu on the right, who floated a ball in towards the back post, met by
the head of Zanetti. Angelo Peruzzi parried the header, only for Paolo Negro to turn the ball into his
own net.

Roma would win only one of their next four games, drawing at home to Juventus and Bari before
losing at the San Siro for a second time, this time to AC Milan. They went on to win their next seven
games, including a dramatic 2-1 victory away to Parma thanks to two late goals from Batistuta, and a
thrilling 3-2 victory at home to Inter Milan. They would only lose once more in the league, away to
Batistuta’s former home Fiorentina.

They were cruelly denied doing the double over city rivals Lazio at the end of April, leading 2-1 until
a 95th-minute equaliser from Lucas Castroman. The next fixture was away to Juventus, their closest
challengers for the title. The Old Lady was nearly three years since their last Scudetto, Edgar Davids,
Zinedine Zidane and Alessandro Del Piero et al were hoping to put an end to that run.

Juventus looked to be doing just that, going 2-0 up within six minutes thanks to Del Piero and an
excellent goal from Zidane. Roma were set for a long evening, Juventus were the better side for
much of the game, coming close to extending their lead several times. On the hour mark, Capello
made the controversial decision to sub off Totti for Hidetoshi Nakata. Totti was unimpressed, as
were the travelling Roma support who voiced their displeasure.

And on 79 minutes, Capello was vindicated. Nakata tackled Davids just inside the Juventus half,
carried the ball forward then from 30 yards out, curled the ball past Edwin van der Sar into the top
corner, making it 2-1 with ten minutes remaining. Carlo Ancelotti then did as Capello did, taking off
captain Del Piero for Antonio Conte to protect their lead.

There was another twist in the tale, however, Nakata again the catalyst. In the 91st minute, he
received the ball from Candela, and again had a shot from distance. Van der Sar got to it this time,
only able to parry it, and first to the rebound was Vincenzo Montella, poking the ball home to send
the travelling Roma fans into raptures, and ensuring they returned home with a valuable point.

Despite his exit in this game being the turning point of the match, over the season Francesco Totti
was Roma’s most important player. He had been made captain two years earlier at the age of 22,
taking over from Aldair, and becoming the youngest captain in Roma’s history, breaking one of the
countless records he would for the club.

Totti came into the season off the back of a painful Euro 2000 – a good tournament for him
personally, winning man of the match in the final and making team of the tournament, but
ultimately heart-breaking as Italy lost to France in the final thanks to a golden goal from Juventus’
David Trezeguet. This loss seemed to only spur Totti on, leading his team by example as he went on
to score 13 goals, then equalling his best return for a league season. For many, when you think of
Totti, the image of him from that season endures – long hair with a hairband, in that skin-tight Kappa
claret home top, wearing the captain’s armband. His first and only title winning season was when he
really grew into the armband, and cemented himself as a club legend – the “Eighth King of Rome” as
he was christened by the Roma faithful.

Onto that final day, where Roma hosted Parma at home, needing a win. It was fitting that Totti
opened the scoring on 20 minutes, thumping the ball past Buffon from inside the box, before pulling
his shirt off and tearing onto the running track of the Stadio Olimpico, towards the adoring fans.
Montella made it two before halftime, pouncing on a rebound from a Batistuta shot.

The third of that attacking triumvirate then got in on the action, Batistuta firing home for his
twentieth goal of the campaign. A late consolation from Marco di Vaio made it 3-1, crowning Roma
champions of Italy and giving the club their third ever Scudetto. The fanatical Roma support were
jubilant, invading the pitch to celebrate with their heroes, the city celebrating for several days after.

The next season Roma came close to reclaiming the title but lost out by a point to Juventus. The
decade would see them finish twice more, in 2007 and 2008, both times to Inter Milan. Much of that
title-winning Roma team left in the years following – injuries meant Batistuta never recovered the
same form; Cafu, Emerson and Samuel all departed to rivals.

Only Totti, Il Capitano, remained, until his retirement last season, signing off with the most goals and
appearances of any Roma player in history. Some would say for a player of his talent his career is
light on silverware. Totti himself admits he could’ve won more trophies elsewhere, but says “my
greatest triumph is my loyalty to Roma”.