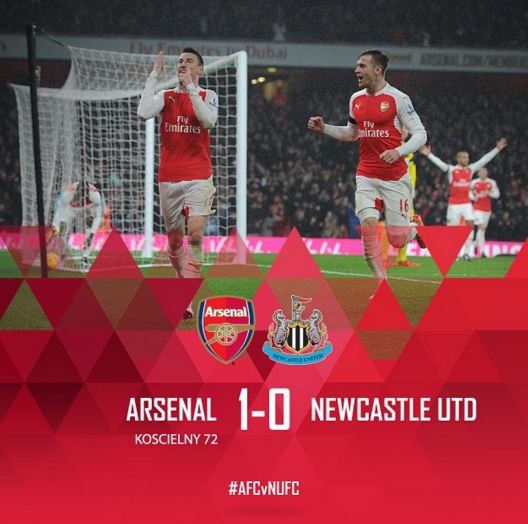 Posted in Arsenal, Newsnow Feed By By Far The Greatest TeamPosted on January 4, 2016January 30, 2017Tagged Arsenal

Arsenal has successfully retained their first position in the league by winning 1-0 against Newcastle United. Although not a massive win in number of goals but Gunners have earned three crucial points that have increased the gap between them and Leicester to two points as the Foxes failed to win their fixture against Bournemouth.

Ozil has portrayed himself as the main man for Arsenal this season, but another player who has been equally important for the Gunners is Laurent Koscielny. He has been the anchor in defence, leading to Arsenal’s many clean sheets and at times, provided the much needed goal to acquire three points for his club.

Koscielny scored with a close range shot giving Arsenal the lead in the 72nd minute. His team-mate, Theo Walcott has acknowledged his efforts and hard work giving him his due credit.

“He joked that he only scores against Newcastle, but he does produce massive goals at massive moments,” Walcott said speaking to the Final Whistle.

“There was a sense that he just lifted his game in the last 30 minutes. I could tell how hard he was working and how much he wanted the team to win. The fact that he goes forward on every corner shows how much of a massive threat he is. He got the goal he deserved and then we managed to hold on with our back four, so it’s another clean sheet for Petr.”

Koscielny spoke to the press, post-match, reflecting on the overall performance and his goal. “It was a tough game,’ said the French International. Newcastle were playing very well, especially on the right-hand side with their right back and Sissoko as well. It was difficult but in the end we won and that is the most important thing for us.”

“We started the game well in the first 10 to 15 minutes. We had good movement with good passes. After that we were a little bit tired and at this moment we knew we needed to be stronger at the back to keep a clean sheet. After that we knew we would have the opportunities to score the goal. During the game this was the case and then I scored from a corner to help us win 1-0. Sometimes we need to win like this.”

“I’ve scored against them before but the most important thing is that the team wins and I am happy with the goal. We need to stay top. I was given the opportunity to score on the second ball and I did it so I was happy. It was important to start the New Year with a win. We need to stay focused because we have many tough games in the second half of the season. Next week we have more tough games and important ones against big teams so we need to have everyone focused on the job.’

Arsenal will travel to Anfield for their next Premier League fixture against Liverpool.