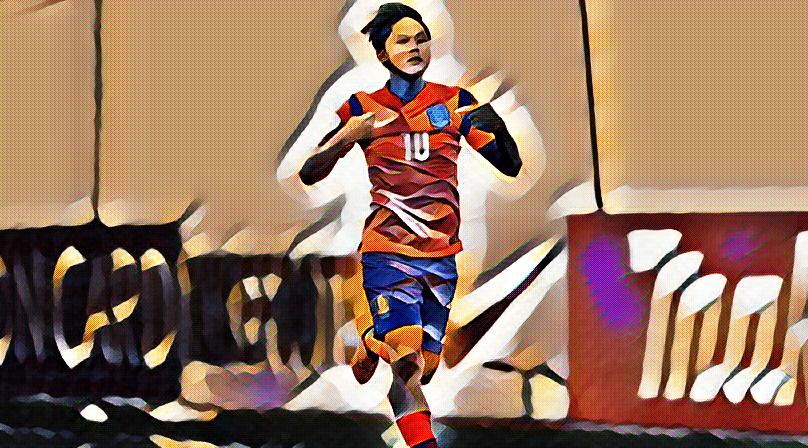 The U20 World Cup kicked off a week ago, with hosts South Korea gathering 2 wins in group 2. The home team have looked impressive and deserved both their wins – against Guinea (3-0) and Argentina (2-1). There are many good talents in this side, but the stand out player, who has been their star at all previous youth levels was Barcelona’s Lee Seung-Woo.

The Korean first made his name at the 2010 Danone Nations Cup, which is basically like a world cup for players aged 10-12. He caught the eye of FC Barcelona after finishing top scorer in the tournament with 12 goals, even though South Korea didn’t even finish in the top 4. He played for Incheon before joining La Masía in 2011.

How does he perform?

Lee Seung-Woo has shone at nearly every youth tournament South Korea have participated in with him in the squad. He finished as the top scorer in the 2014 U17 Asian Championship as well as being named best player. The next year, he participated in the U17 World Cup in Chile, where he arguably had the least impact compared to the other tournaments. Now he is participating in the U20 World Cup as part of the host nation’s final squad. He’s had a solid start to the tournament with 2 goals and 1 assist in 2 matches. He’s been the creative force behind the team as the number 10 and has been creating plays with clever passes and running at the defence to create opportunities of his own.

As for Barcelona, he started superbly at Cadete B in his first 2 seasons. Starting with his first where he scored over 35 goals. Breezing through defenders with ease and scoring hat tricks left and centre, breaking the record of Lionel Messi himself. In February 2013 however, he was banned by FIFA and was ineligible to play competitively for the club until he turned 18. This was due to Barcelona not following the transfer regulations. In this case, Lee Seung-Woo signed for the club when he was 13. FIFA rules do not allow non-EU youngsters to sign unless their parents moved for reasons not related to football or unless they are less than 50 KM away. The South Korean is now 19 years old and has been allowed to play competitively as of last year. Should he continue impressing at youth level, appearances for the first team shouldn’t become too surprising in the future. Similar to when Munir was given his chance.

Lee Seung-Woo has been nicknamed “the Korean Messi”. Now, there have been many occasions where a player is nicknamed “the (nation) Messi” and it’s inaccurate most of the time. Usually it’s a way of saying that its X nation’s most talented player. In this case, it’s actually very accurate as his style of play is reminiscent of the Argentine. He’s a versatile player who can play on the wing or as a 10. He has exquisite vision, great dribbling and is a speedy player who runs at the defence to intimidate the opposition or looks for open space far out to put in a clever pass and get the assist. Just watching him will remind you of Lionel Messi as the style is very similar even if the level isn’t quite the same.

As mentioned earlier, his strengths are similar to what Lionel Messi excels most at. Great vision to find the best player to pass to, great dribbling complimented by good acceleration and pace. Other strengths include him being composed on the ball. He doesn’t look nervous too often and calmly places his chances in the net instead of not thinking and skying the ball over the bar. He’s a creative player who can help a lot with the build-up play to initiate attacks, creating chances for others as well as for himself. It was mentioned earlier that he runs at defence like Messi, which would also be listed as a strength as he does it well. He has a high stamina level and lastly his technique is very good for his age.

He is a bit of an arrogant player. It’s not only been noted with the press having made arrogant comments whether it’s about his own team or himself, it’s also been seen on the pitch. Occasionally creating chances for himself and himself only. It’s usually a problem mostly inside the box, although the issue isn’t awful and can definitely be corrected to allow more consistency in that area of his game. Another weakness is his passing. Again, it’s not awful but while he is excellent at picking out a pass, he doesn’t always execute it perfectly. These are both issues that should improve with age and commitment in training.

Lee Seung-Woo will most likely come on as a rotation option in the smaller games for Barcelona because it’s unlikely he will take over Neymar, Suarez or Messi for the time being. He definitely has potential to play in the starting 11 but for the time being he should take the same steps as Munir when given the chance to not burn himself out. He should definitely be given a loan to another Spanish club in the first tier and if he lives up to his potential then he can occupy a spot in the Barcelona starting 11 or another top club. He could play on the wing in the future or if he stays at Barcelona, perhaps be an option as a playmaker once Iniesta decides to hang up his boots. It could also be good that after this tournament, he breaks into the Barcelona B side to play more professional football at a lower tier.

As for the South Korea national team, should he impress the rest of this world cup, he should be given an opportunity in the remaining Asian qualifiers and the World Cup assuming they qualify. Right now, the top South Korean player is regarded by many as Son Heung-Min who is currently at Tottenham. He plays in a similar position to Lee as both can play on either wing and the versatility makes it possible to start both. It wouldn’t be a surprise to see him in Russia next year and will more than likely become the star player of the South Korean national team in the future.