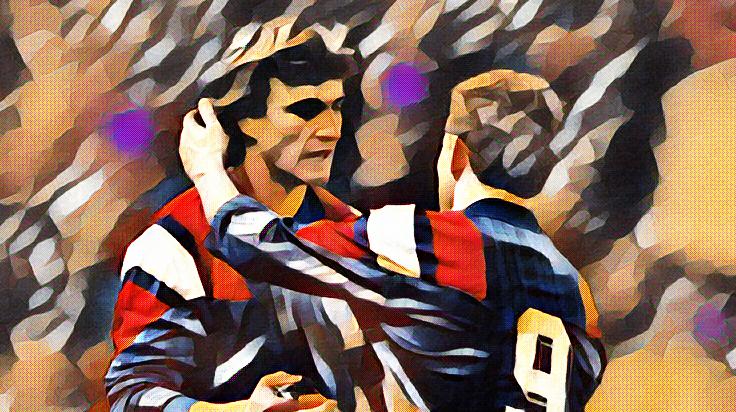 13th October 1993, Gérard Houllier’s French side is a certainty to qualify for the World Cup in the USA the following summer. Les Blues sit pretty at the top of Group 6 with a four-point-cushion, ahead of Sweden in second place. A further point separates the Swedes from Bulgaria in third. With 13 points accumulated from the previous fixtures, France needed just one point from the remaining two games to qualify for the biggest competition in world football. Houllier’s team had the luxury of two home fixtures against Bulgaria and innocuous minnows Israel with qualification inevitable, surely?

It was a miserable, wet evening in Paris with an expectant 32,000 fans eagerly anticipating a comfortable victory to accompany secure progression to the World Cup. France had missed out on Italia 90 after finishing third in Mexico four years earlier and there was a party feel to the build-up in Paris. The weather, which was particularly wretched, failed to dampen spirits around the ground, with the mood naturally optimistic. Joe Dassin’s L’Amérique echoed across the tannoy system of the Parc des Princes as the whole of France prepared for a summer in the United States.

Israel were humbled in the reverse fixture in February, where goals from Cantona, Roche and a brace from Laurent Blanc saw the visitors win 4-0 in the Ramat Gan Stadium, Tel Aviv. A similar score-line was predicted this evening with fans favourite and former European Footballer of the Year Jean-Pierre Papin captaining a side littered with household names.

Israel had amassed just a single point prior to the fixture, after an encouraging 2-2 draw in Bulgaria back in May that served to highlight a willingness to attack away from home.

Ronen Harazi, who played for Beitar Jerusalem in Israel, scored his side’s first goal in Sofia, stunning the Parisian stadium by opening the scoring after just twenty minutes. Marcel Desailly conceded a throw-in deep within his own half, which resulted in a long looping cross from Ronny Rosenthal to the back post. An acrobatic diving header from the long-haired figure of Reuven Atar kept the ball in play and left the striker with the simple task of turning the ball past Bernard Lama giving Israel a surprise lead in Paris.

Ten minutes later, in an inspirational attempt to encourage their side, the home fans united in a stirring rendition of La Marseillaise and as the last notes faded into applause, David Ginola teed up Franck Sauzée, who found the bottom corner from outside the area. Sauzée’s precise side-footed attempt skipped off of the greasy surface and nestled in the back of the net before the midfielder shimmied awkwardly in front of the home support in celebration.

Just before half-time France all but secured their place at the finals as David Ginola exquisitely put Les Blues ahead. The midfielder controlled a Didier Deschamps diagonal on his chest before cutting inside the defender and curling an unstoppable shot into the top right corner from outside the Israeli area. It was almost certainly the standout moment in Ginola’s international career, which would spectacularly decline within the coming months.

At the break Houllier’s team were there, they had a lead against the minnows of Group 6 with only a point required. The second half should have been a procession to USA 94 where the French, on paper, could be a threat. In reality, the final 45 minutes still ranks as one of the biggest upsets in qualification history.

There were just six minutes to go. Eyal Berkovic, a second-half substitute stabbed the ball towards Lama’s goal as the keeper could only push away a scrambled effort from a combination involving Harazi and Rosenthal. Desailly’s attempted goal-line clearance only added to the confusion but as the ball crossed the line, it was the young Maccabi Haifa midfielder celebrating an unlikely equaliser. Prior to the goal, the French had pressed, with a third and clinching goal looking inevitable. Chances came and went, with Papin missing the most notable of opportunities to put the game beyond the reach of Israel. The hosts were left to rue earlier chances but the price was about to get a whole lot steeper. In stoppage time, with the French looking for a winner, the ball broke and was played wide to Rosenthal. The Liverpool winger once again surged into the area before managing to dig out a left-footed cross to the penalty spot. Atar, who had been so influential in the opener, met ‘Rocket Ronny’s’ cross on the half volley, sending the ball into the roof of the net and left the home fans whistling from all corners of the Parc des Princes.

Just moments later, boos and whistles greeted the final whistle as the supporters vented their frustration at their team, who had thrown away early qualification to the greatest show on earth.

The unthinkable result left Houllier and his team with one final opportunity, a lifeline and the visit of Bulgaria to Paris; a winner takes all clash between the two sides. Bulgaria had taken full advantage of France’s slip up, beating Austria 4-1 in Sofia the same night that Israel stunned the world. A Bulgarian win in Paris in November would mean that they leapfrogged the French team into second place and would join Sweden in the United States of America in June.

There was just one change to the side that suffered the defeat to lowly Israel, with Reynald Pedros preferred to David Ginola but the latter would have a major part to play before the final whistle.

Manchester United’s flamboyant striker Eric Cantona settled the nerves in the French capital with a confidently struck half-volley from close range. Didier Deschamps played a diagonal into the box, which was nodded down by Papin into the path of Cantona after just half an hour.

The Bulgarians needed a response and just five minutes later FC Porto striker Emil Kostadinov gave them hope, sending shock waves around the famous Parisian stadium and wiping out the cushion held by the French. An out-swinging corner was met by Kostadinov, who peeled away from the front post to send a stunning header past Lama and into the top corner.

Despondently, Houllier slumped back into his seat within the home dugout, reeling that his side had allowed the Bulgarian’ back into the match.

In the 68th minute, the French manager made his first substitution with Ginola replacing Papin. With France still in control of the match and on course for the point they needed the midfielder was instructed to retain possession and run down the clock where possible.

The home side successfully negotiated the next twenty minutes before the substitute won a free kick by the Bulgarian corner flag with just moments remaining.

Ginola, wearing the number fifteen shirt, received the short free-kick from Vincent Guérin and in a moment of brainless exuberance, delivered a long, hanging cross into the Bulgarian penalty area. With the ball sailing over Eric Cantona, France’s sole representation in the French box, the Bulgarians gained possession through defender Emil Kremenliev, who launched a counterattack down the right-wing. A perfectly judged pass from Lubo Penev was controlled by Kostadinov in the French area before striking a ferocious shot off the underside of the bar and into the back of the net. Lama was left face down as the stadium fell silent but for jubilant Bulgarian celebrations.

A pile of Bulgarian players covered a patch of turf at the Parc des Princes in contrasting scenes that saw French players and management alike hold their heads in their hands as disbelief and despair engulfed a nation.

The Bulgarian squad had produced a sensational comeback that sealed their own qualification for the World Cup in a game that will be forever remembered across Europe and casts a large shadow over the history of French football.

Scottish referee Leslie Mottram blew the final whistle just seconds after the restart and as the Bulgarian player’s raised their arms in unison, the camera turned to one man, David Ginola. The PSG midfielder placed his hands on his hips and looked to the floor in anguish before slumping over an advertising hoarding in desolation at the costly manner of his mistake that would largely shape his international career.

The result rightly left the French players and management in the firing line of the both media and supporters. The team had unexplainably missed out on qualification that just a month before had been a virtual certainty.

An angry Gerard Houllier focused his blame in one direction, singling out Ginola for criticism in a damming post-match interview:

“The adventure is over all too soon. With only 30 seconds remaining, we were there but we got stabbed in the back and at the worst possible time. The referee still had his whistle to his mouth when Ginola won that free-kick near the corner flag, but then he goes and sends in a huge 60-metre cross instead of hanging on to the ball. That allowed Bulgaria to go and hit us on the counter.”

The French manager continued to label the player as “the murderer” of French hopes, claiming that:

“he sent an exocet missile through the heart of French football and committed a crime against the team.”

It was a moment of tactical naivety that the manager is yet to forgive the unpredictable midfielder. Ginola and Houllier would later contest long legal battles, with the winger suing his former manager for defamation.

The press had little sympathy for the winger, who was branded the ‘Assassin of French football’ in the immediate aftermath of the defeat.
Bulgaria and their golden generation of Hristo Stoichkov, Ledhkov and Balakov stunned the world in the United States, beating Argentina in the group before a staggering defeat of Germany in the quarterfinals. Penev’s side eventually lost to Italy in the semi-finals before losing to qualification rivals Sweden in the third-place playoff.

After failing to qualify, Houllier was quickly replaced by his assistant Aime Jacquet, who directed his national side towards the most successful spell in the history of French football. Jacquet retained integral players such as Deschamps and Desailly, integrating them with the future of Les Blues. Barthez, Thuram, Vieira and Zidane were brought in by the former Lyon manager who masterminded France’s 3-0 win over Brazil in the final of the World Cup in France 98, just four years after USA 94; his last game in charge.

The victory as hosts in 98 largely washed away the pain of USA 94, with Euro 2000 bringing further success for Les Blues. However, the inexcusable failure to qualify from such a strong position will forever remain a stain on the history of the French national side and the Parc des Princes.