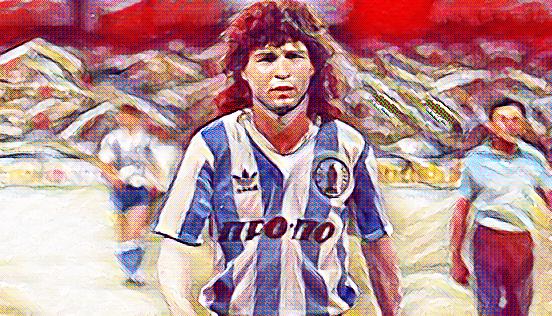 It’s very hard to go unnoticed in modern football. Worldwide TV coverage and YouTube has meant that even players from far-flung corners of the world can be lauded by fans across the globe.

However, football in the 70’s and 80’s was very different story.

Without this widespread coverage, many players who had the talent to be world beaters and legends of the game simply went undiscovered, often only achieving recognition in their homeland.

One such player is ‘the Greek Maradona’ Vasilis Hatzipanagis.

The story of his career his one of brilliance, overshadowed by misfortune, ifs, buts and a great sense of what could have been.

So, with a bit of help, I’m going to tell that story for you.

Hatzipanagis was born on October 26th, 1954 to Greek political refugees in Tashkent, the capital of modern day Uzbekistan.

Back then the country was known as Uzbek Soviet Socialist Republic, a satellite state of the Soviet Union, and this would have a detrimental effect on his career later down the line.

He was scouted in his mid-teens by Pakhtakor, a club in the city of his birth, with the team keen to invest in his raw yet unrefined talent. His magical dribbling skills and creativity as an attacking midfielder made him a special talent.

However, the strict Soviet law meant that Hatzipanagis needed to obtain Soviet citizenship before being eligible for the USSR’s top flight. He managed this and made his professional debut for Pakhtakor at the tender of age of 17.

He went on to make 96 appearances for the club across three years, scoring 22 goals, helping Pakhtakor gain promotion to the Soviet Supreme Division in 1972.

In 1975, he played four times for the USSR Olympic team as they looked to qualify for the Olympic Games in Montreal, Canada the following year. He scored against Yugoslavia on his debut, also featuring against Iceland and Norway.

This was an incredible feat achieved by an equally incredible player.

At the time, the Soviet Union only selected a full international squad, as the Soviet Supreme League was considered amateur level but, such was Hatzipanagis’ talent, he could not be overlooked.

However, he quickly became disillusioned with life and playing under Soviet rule, turning his back on the national team and Pakhtakor following his USSR appearances, moving to Greek side Iraklis.

Although not often spoken of today, at the time, word of Hatzipanagis brilliance had spread to his country of origin.

Greek sports journalist Costas Bratsos told me that fans gathered to meet the player before he had even signed for Iraklis.

“He obtained a legendary status even before his arrival in Thessaloniki to sign for Iraklis. There were 3,000 fans waiting for him at the train station as late as 1 am.”

Hatzipanagis made his debut for his new club, and the last club, in December of 1975, in front of a sell-out crowd, with the exceptional support and love for his talent one of the reasons as to why he never left.

Unfortunately for Bratsos, he did not witness Hatzipanagis at his very best but, he has spoken to many people who did, and it’s easy to see why he was, and still is so loved, not just by Iraklis supporters but, across the whole of Greece.

“Due to age, I wasn’t able to enjoy him at his best. However, I’ve talked to a lot of people that couldn’t wait for Sunday to come, so they could enjoy a visit at ‘Kaftanzoglio’ (Iraklis’ home stadium). He managed to unite fans from all teams, from North to South. Everybody had a favourite team, but also everybody was eager to watch Iraklis playing, just for him” gushed Bratsos,

“When you were watching Hatzipanagis, you were not prepared for what was going to happen. In a decade with no full TV coverage of football games and, of course, no YouTube, there were so many tricks and skills that Greek people had never seen before. That was until Hatzipanagis came to Iraklis and brought them as a gift to us all.”

When asked who Hatzipanagis was most similar too, Bratsos named the legendary Sir Stanley Matthews.

“I’d say, Stanley Matthews. A world-class dribbler, always with the ball in front of him, provoking a reaction from the defender and then, disappearing from sight. Probably not at the same level as a player, but in terms of their main characteristic, dribbling, I believe they were on similar levels.”

Despite the fans love for Hatzipanagis keeping him at Iraklis for the remainder of his career, the contract the attacking midfielder had signed heavily favoured the club, essentially blocking the player’s exit if he wanted to depart. His talent caught the eye of clubs across Europe, including Arsenal, Porto, Lazio and Stuttgart but, he never got the big move his ability deserved.

I was keen to find out from Bratsos if he and the Greek people thought that Hatzipanagis would have been just as much a success abroad as he was in Greece.

Bratsos had some doubts but believes that he would have been if the right club had come along.

“He wasn’t a fan of training, at least not the physical side of it, so maybe he wouldn’t have cope with the expectations of English football or the Bundesliga of the 80s. But I could definitely see him in a team where he would have been protected by some hard-tackling defenders and with runners beside him to feed them through balls, such as Lazio or Porto. As for Real Madrid, well before “quinta del buitre” (the nickname given the Spanish core of the Real team in the 1980’s), he could have had a chance!”

With a big move to mainland Europe or England near impossible, the only chance Hatzipanagis had of showing the world his talent was with the Greek national team.

However, his time in the Soviet Union came back to haunt him.

In May 1976, he made his debut for Greece against Poland in an international friendly. The crowd in Athens were bewitched and in awe of the long-haired genius as he ran rings around the Polish team.

But, this appearance was to be his last.

Immediately after the game, Hatzipanagis was informed that was ineligible to play international football, having already represented the USSR.

A crushing blow for a player who’s talents deserved better.

Bratsos is confident that despite his contractual obligations to Iraklis, being able to consistently play and perform on the international stage would have seen Hatzipanagis make his big move.

“He only had one cap in an era, at least for Greek players, when they could only show their talents to the world through the national team. Almost everybody here thinks that if he could have played more for Greece, he would have got the transfer abroad and played with Maradona and Platini in Italy for example.”

With no international football and the chance of a move abroad pretty much non-existent, ‘the Greek Maradona’ was confined to being an almost unknown in the football backwaters with Iraklis.

Hatzipanagis played out the rest of his career in Thessaloniki, playing 281 games, scoring 62 times. He made his final professional appearance on September 19th, 1990 against Spanish side Valencia in the first round of the UEFA Cup.

Despite Iraklis appearing to stop Greece’s greatest ever player becoming a legend of the game, Bratsos explained that there is no animosity towards the club for tying down the nation’s favourite footballing son and that it was just the way Greek football was at the time.

“Iraklis didn’t even have to struggle in order to keep Hatzipanagis. They knew the law was on their side. Even footballers knew that once they signed a contract with a clubs, they had automatically surrendered their future to this club.

“Many players before Hatzipanagis and some even after him could and should have had a career-changing transfer, but football laws prevented them.

“There was an extremely gifted attacker, Mimis Papaioannou, the best player in the history of AEK Athens. He stayed away from the game for a whole season, trying to force a transfer to the Real Madrid in the 1960s, but he couldn’t.

“It was just the way things were at the time, unfortunately, and everybody knew it.”

Hatzipanagis did manage a swansong appearance for Greece in 1999, just over 23 years after his one and only cap for the country, playing 20 minutes against Ghana, being honoured post-match by the Hellenic Football Federation for his contributions to Greek football.

The federation also selected Hatzipanagis as their Golden Player of the past 50 years to celebrate UEFA’s 50th anniversary. In a beautiful yet indirect tribute to a player who deserved more, especially on the international stage, Greece shocked the world and won the next international tournament, Euro 2004.

Despite the love and god-like statues he obtained in Greece, Hatzipanagis has made it clear that his career was filled with regrets.

“I regret not having been able to wear the Greek national jersey more than once. And I regret not having made a career abroad. I would have liked to play in a better league, to have enjoyed football at that level. If I could turn back the clock, I would do some things differently.”

Now 62, Hatzipanagis is rarely heard from and appears to have been forgotten and ignored by the football world but, not in Greece.

He was truly brilliant to watch, dazzling, brilliant and magical, he broke the mould of Greek football.

“Traditionally, we were used to dynamic, strong players, or footballers with a good right or left foot” explains Bratsos

“But we never had a player that skilful and so good at dribbling. He was a player that was aesthetically pleasing to watch but also effective, even though his teammates destroyed his efforts a lot of times.”

When I interviewed Bratsos, my final question about Hatzipanagis was this…

Do you think Greece will ever see a player like him again?

The answer was resounding.

“Not a chance. Almost thirty years after his last game, no player has matched his style nor his level. There are no dribblers like him in Greek football and even his undisputable passing abilities are rare amongst Greek players. He is a once in a lifetime player.”

I think that says it all about a truly magnificent player that the world needs to know about.