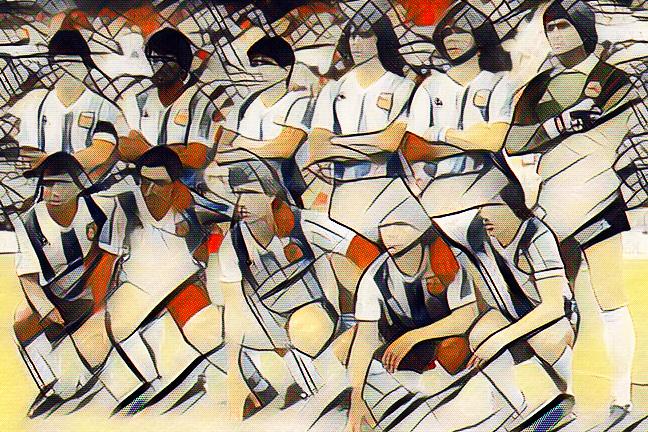 Before a ball was kicked this World Cup produced a farce and we really should have known it was going to be like no other. If you were going to write a comedic take on a draw organised by FIFA it would have things like men in suits looking like they know what they’re doing, but clearly don’t. Balls containing team names which won’t open. Mechanical cages which hold the balls but won’t open either. Young boys doing their best to help with proceedings but being barked at by the suits, frustrated at all their preparation was failing around them.

FIFA had announced they were expanding the tournament to twenty-four teams from the sixteen which, other than a couple of tournaments when teams withdrew, had been the format since 1934. With FIFA keen to make their showpiece as big as the Olympics, they plumped for more razzmatazz for the draw. Traditionally draws had been fairly matter-of-fact affairs with suited gentlemen, who no one had seen before or after, picked names out of a hat. No celebrities, no balls in a barrel no “come on, Dennis, make sure all the balls have been emptied out of the bag otherwise I’m going to get it on twitter tonight”.

For this draw FIFA had the idea of cages containing little footballs, each containing the name of a qualifier. But these footballs would look silly in the hands of grown men, so they had the brainwave to ‘hire’ local boys to hand the balls to one of the dignitaries who would reveal the contents. In essence it seemed like a brainwave, I mean what could possibly go wrong?

Well, to begin with not all the cages opened when they were supposed to, and of those that did, not all of them would happily give up the footballs they protected. When the boys were able to extract the ball from the cage and hand it to a ‘suit’ he wasn’t always able to open the ball to reveal the name. Then one cage jammed and snapped a ball in half, leaving the name in full view of the watching world. If you turned your tv up enough you’d swear you could hear the hiss of air draining from the balloon of anticipation FIFA had proudly flown from the start.

As if this wasn’t enough, things really hit the comedy gold stratosphere when Scotland was drawn out. Firstly, they were drawn in Argentina’s group but unbelievably Sepp Blatter ordered a re-draw and back in their cage they went. Blatter, yet to be exposed as an arch-manipulator, explained there’d been a mistake when Belgium was drawn into Italy’s group, so they were moved into Argentina’s group. Ironic when you consider what happened when the two teams played out the opening game. Belgium had complained to FIFA about England being a seeded team. Neither country had participated in the two previous tournaments, but Belgium felt their runners-up finish in Euro ’80 should trump England’s World Cup record, despite Belgium never making it out of the first round in any World Cup before. But England could never play in the same group as Argentina as the two nations were at war. For Scotland they were suddenly moved into the same group as Brazil. Frying pans and fires came to mind, but then so did the words organising and breweries.

But don’t go and put the kettle on just yet as there’s more to come. Peru and Chile were supposed to be removed from the initial draw to ensure they avoided Brazil and Argentina. Unfortunately, nobody told the man given the task of setting up the equipment. Stories emerged afterwards the small boys were actually from a Madrid orphanage as FIFA were accused of exploitation. Their cause was not helped when one of the suits was heard to rebuke a child with a stern “get it sorted, boy!”, in full range of the microphones as if these poor young chaps had, had anything to do with the organisation of the event.

Looking back we can see the beginnings of an organisation which became a caricature of what an efficient governing body should look like. In years to come we would become weary of a body which attempted to manipulate so many circumstances to suit its own ends, but back then this was quite shocking they could get it so wrong.

#2 A World Cup to forget for Argentina

When Argentina won the World Cup on their own soil, for the first time in 1978 it signified celebrations few had seen before. Having hosted the first competition back in 1930 they waited a very long time to be crowned champions, whilst watching Uruguay and Brazil raise the trophy more than once. They arrived in Spain as defending champions but they were far from prepared for what lay ahead.

There are many in England who can never forgive them for Maradona’s ‘Hand of God’ goal in ’86, Rattin’s ‘Animals’ in ’66 or The Falklands War. It was the latter which was the backdrop to their inauspicious showing in Spain ’82.

The Falklands War or Conflict, began on 2nd April 1982 and lasted for ten weeks. The Falklands, a group of islands off the coast of Argentina, has been a British Overseas Territory since 1841 with the inhabitants overwhelmingly considered themselves British. Argentina had been in the grip of a military dictatorship since 1976, but in 1981 there were demonstrations against the harsh economic conditions the people were living in, and the brutal regime’s human rights violations. The military leaders considered the islands were worth claiming as the British would never bother defending them and the public would be carried along on a wave of patriotic fervour.

As it turned out the British were only too keen to defend their territory and sent a naval taskforce to thwart the invaders. By the beginning of June the occupying Argentinian forces were losing their grip on the islands and by 14th June they had surrendered.

But for the Argentinian public and footballers, they were given a completely different story by their military rulers. All but three of the party played their football in Argentina and they were under the impression all was going well and they were repelling the British. But for players such as Ossie Ardiles, who was playing for Tottenham, and Daniel Bertoni, based within Italy with Fiorentina, they were well aware of what was actually happening. So when the Argentine squad landed in Spain many believed it was only a matter of days before the British would themselves surrender. When they turned on their tv’s the truth was soon discovered and as they all understood Spanish, nothing could be lost in translation.

Argentina took the field in the Nou Camp for the opening match of the competition on 13th June. They were clearly under-cooked and ill-prepared. Diego Maradona was now the star of the team, having been considered too young four years previously, when he was seventeen. He was player of the tournament in the World Youth Cup in 1979 and by 1982 was considered one of the best players in the world. So much so that Barcelona had agreed to pay Boca Juniors a, then world record fee of £5m, for Maradona to move there after the tournament. With the opening game at the Nou Camp, the Catalans turned up in their masses to see their new signing.

Maradona was the only change in the Argentina side from the one that had lifted the trophy in Buenos Aires four years before, and perhaps this illustrated how the squad had become old. Belgium were still considered ‘minnows’ by many but their performance in the European Championships in Italy in 1980, where they were runners-up to West Germany, had made many sit up and take notice. They won their qualifying group ahead of the French and the Dutch too and were emerging as a force in European football.

Erwin vandenbergh scored the only goal of the game and it seemed to sum up the Argentine mood. A ball played from left-back went beyond the defence, who stood frozen, and the Belgian striker had time to control the ball on his chest, wait for it to bounce and then slide it under Fillol. Maradona had the best chance to equalise when his free-kick hit the woodwork, but the holders were slow, ponderous and looking jet-lagged.

It was the first time the opening fixture in a World Cup had produced a goal since 1962. These were days when small nations didn’t often beat the big ones and so we wondered whether this would lay the foundation for an exciting, unpredictable tournament. The next day news of the Argentine surrender went around the world.

They won their other two group matches to progress to the Second Group Phase where they were beaten by both Italy and Brazil and crashed out not having done themselves justice. Rumours abounded of a split in the camp between the older and younger members of the squad. For a side so unchanged from that which lifted the trophy in ’78 it was odd they relied so heavily on Maradona, but both Italy and Brazil did a job on him, although both used different methods. We will consider this in a further issue. It was a disappointing defence of the trophy, but they would go onto redeem themselves four years later when Maradona emerged as the hero of an arguably less talented squad.