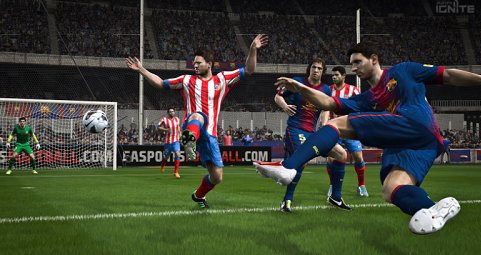 In EA SPORTS FIFA 14 players now have four times the decision making ability than the current generation of footballers, enabling each player to have Pro Instincts—human-like reactions, anticipation, and instincts. The leap forward in intelligence is matched by innovations that deliver true player motion. Now in FIFA 14, every step matters with Precision Movement that enables players to explode out of each step and every turn like real athletes, preserving their natural momentum. Plus, the artistry and athleticism of footballers will come to life with Elite Technique that world class players express in every match.

• EA SPORTS IGNITE—Ignite blends new technology with the best rendering, run-time physics, animation, intelligence, locomotion, and online systems from across EA into one powerful, new engine. Athletes possess human-like intelligence for advanced decision-making, players have true athletic motion, and living worlds make the game experience as rich and dynamic as real-world stadiums.
• Pro Instincts— Players will make intelligent decisions with human-like reaction times, moving instinctively around the pitch like world class footballers. Players will anticipate moves to seal off opponents and intercept passes, skip over tackles and out-stretched legs to avoid collisions, and slow opponents by hooking or holding an arm.
• Precision Movement— With 10 times more animation depth and detail, EA SPORTS IGNITE delivers the dynamic movements and biomechanics of the world’s best footballers. Every step counts as players now plant, pivot and cut, change direction and shift their momentum with the agility and explosiveness of elite athletes. Player acceleration and deceleration is more realistic with a game-changing effect on gameplay. Players feel more grounded, agile and explosive, and manage their momentum with distinct foot plants and push-offs.
• Elite Technique— Harnessing the power and memory of the new consoles, FIFA 14 delivers hundreds of never-before-seen new skills and behaviors. Players have an arsenal of new shot types such as side volleys, defections, power chips and first time screamers, and new passes such as touch, over-head, slice and lobs. New behaviors include trapping the ball in stride at pace, panic turns when defenders are beaten, off-balance shots, missed shot reactions, and more.
• Living Worlds— The world inside the stadium feels alive and stunning 3D crowds and dynamic sidelines impact the experience. Players are also aware of the match and what needs to be done to get a result—their sense of urgency increases as the match draws on, and if a goal is needed, they rush to take a throw-in or corner if time is running down.
• Pure Shot—Players have the intelligence to adjust their stride and approach angle to find the best position for hitting the back of the net. Well-hit balls feel satisfying and goals are rewarding. As well as quality strikes, players can now shoot while off balance or rushed.
• Real Ball Physics— Strike the ball with more force and finesse. Realistic ball physics now determines the trajectories of balls in game, enabling players to strike the ball with force from distance, drill low rising shots with accuracy, and blast dipping or swerving shots, just like real footballers.
• Protect The Ball— Dominate midfield and dictate the tempo. Fend-off and block defenders from the ball while dribbling at any speed. Protect the ball from opponents to control play through midfield and dictate the pace of the match. Plus, out-muscle opponents for position before receiving the ball, then turn defenders to carve out opportunities.
• Teammate Intelligence— Better decision-making delivers tighter, smarter marking and improved run tracking. Defenders recognize opportunities to provide support and win back possession. Attacking players have new ways to outsmart their opponents by creating space for themselves, running along the backline and checking their pace.
• Sprint Dribble Turns— Utilize quick, explosive cuts and turns to beat defenders one-on-one while sprinting with the ball. Players can move in any direction, preserving their natural momentum and maintaining possession of the ball.
• Variable Dribble Touches— The First Touch Control of dribbling varies a player’s touch when dribbling with pace. Skilled players stand out while less skilled players will experience fewer perfect touches and more uncertainty dribbling.
• Skill Games–A competitive practice mode to learn or master the fundamental skills necessary to compete at FIFA 14. Become a better player, faster, no matter what your skill level, competing against yourself or friends in all-new mini-games.
• Career Mode— Search for talent year-round with the new Global Transfer Network that brings the world of professional scouting to life. Develop and refine your own scouting network. Evaluate footballers to uncover the attributes of players who could bolster your squad during the transfer windows. A new hub delivers easy navigation, fewer interruptions and live scouting reports.
• Complete Authenticity—500 officially licensed clubs, over 30 leagues and more than 15,000 players.

What does FIFA 14 look like? Pure Shot, dictate tempo and protect the ball