Moments after conceding a 77th minute equaliser to Michael Tongue, Sheffield Wednesday keeper Chris Kirkland was attacked by a fan who jumped on to the pitch from the away end situated behind Kirkland’s goal.

Aaron Cawley, 21, had already breached his football banning order three times before last night, the last of which happened a year ago. His ban, which he was originally given when he was just 16-years-old, forbids him from travelling on the national rail network to or from any town or city on the day Leeds play a home or away game in that city.

“I am not a hooligan,” he said at the hearing last year. “I don’t go to cause trouble. I just want to go back to watching Leeds play.” 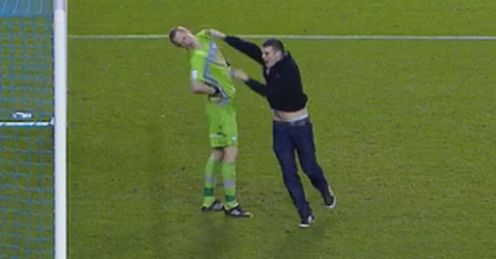 “They are vile animals. You talk about racism [but] the chanting, that’s a form of racism,” Sheffield Wednesday manager, Dave Jones, said after the game. “They should be banned from every away ground if they’re going to behave like that. They [Leeds fans] are all going to get tarred with the same brush and that’s not right, but they will do and they should do because it wasn’t one person chanting the vile things. I thought those days had gone 15 or 20 years ago. They should be punished. I’ve had it for 12 years and it is just upsetting that they are able to do it. The authorities have to look at it and sort it. I’m talking about an incident when we should be talking about the football. I really am fuming that he [Neil Warnock, Leeds manager] sent his players to clap them. For what? Wrecking a stadium, beating up my goalkeeper?”