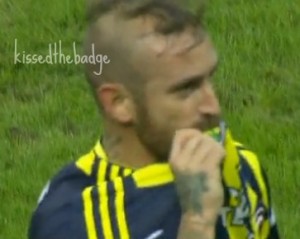 Raul Meireles has been given an 11 match ban after the Turkish FA have ruled that he is guilty of spitting at a referee following his red card.

Meireles angrily confronted the referee following his sending off and on first viewing it may appear as though he does spit. However, from a different angle, it looks as though he is just shouting. The referee doesn’t react as one might if someone had just gobbed in their face.

The Fenerbahçe midfielder, who left Chelsea for £8m in the summer, has protested his innocence. “It is not true,” he said. “It is an attack on my human rights. I’m the one who knows what I am doing. I do not want to get punished for something I did not do. I’m a father so this puts me in a difficult situation when I’m teaching my child. My daughter at school gets told ‘your father spat at the referee’.”