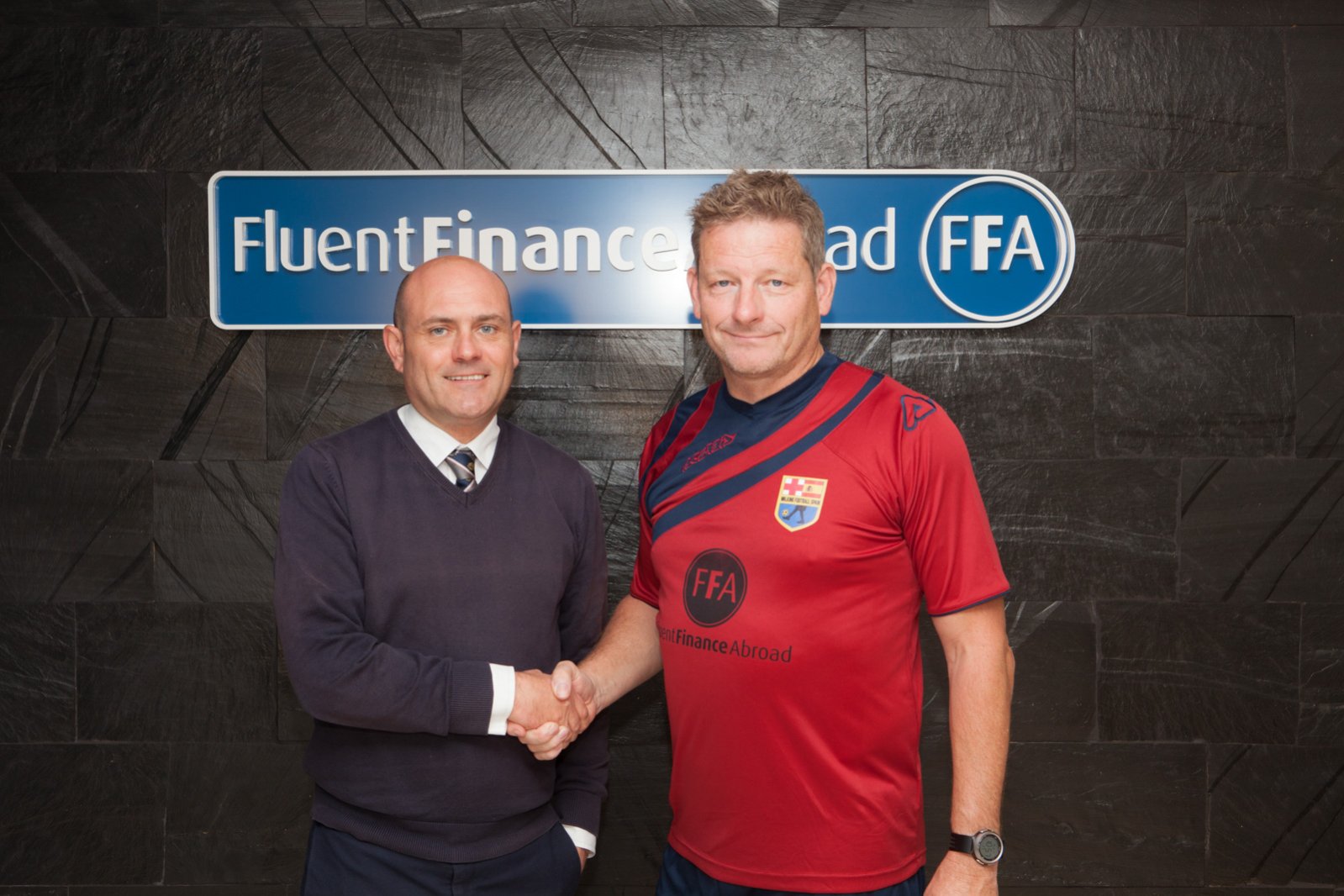 There is meant to be a European Championships next year and a World Cup the year after, I bet you didn’t know that, did you? To be fair, neither did I before I had a very insightful chat with Adam Chandler who is the founder of ‘Walking Football Spain’ which is all do with the phenomenon that is Walking Football, the clue is in the name, you see. That’s Adam in the picture by the way, he’s with Marc Elliot de Lama from Fluent Finance (shameless name drop done). Once I done a bit of research so I didn’t sound completely stupid, I spoke to Adam and he talked me through it all, which was an education and a pleasure at the same time…

“Walking football started five or six years ago in the UK, it was invented by John Croot who is the director at Chesterfield Football Club and it grew from there. I’ve always played football throughout my career, when I was in the army I played football but when I was forty my knees went a bit south and I had two keyhole surgeries on both knees meaning I couldn’t do any impact sports like football. So it was only swimming and cycling; I lived in Marbella for 6/7 years, moved back to the UK in 2011 and spent a couple of years there and that’s where I heard about it. When I moved back to Spain I thought I’d give walking football a try but there wasn’t anything out on the Costa del Sol. There were a few other clubs in Spain so I thought I’d start something for myself and I wanted to do something different to what I had been doing.”

I wanted to do something different

I was going to say, this is a bit different to what you’ve done before…

“I was a professional photographer, an editor and I’d worked as a photographer in Marbella before, but, I’ve always been quite sporty and played football, tennis and badminton at a reasonable level. When I hit fifty I felt I wanted to do something different for my second career as you will and walking football was a good idea at the right time. It was a sport that was really growing and was about to take off, there are about 1,000 clubs in the UK now. There was nothing in this neck of the woods so it was the right idea at the right time.”

Seems like it all fell into place quite nicely. How does all it work though? What are the rules?

“There are no worldwide set rules at the moment, every club plays their own way. In the UK there’s the Walking Football Association (WFA) who have standardised the rules and regulations in the UK. In Spain there’s something called the Walking Football Union and they’ve got slightly different rules. Then you’ve got the European Legends rules, they play in Holland and Germany and play without a goalie and very small goals so there are very different rules. It’s a matter of picking which ones work for you at the moment and which ones work for your club.”

“We play roughly the UK rules but we changed them slightly in the sense that we adhere to a three-touch rule; there’s quite a few clubs in the UK that do play three touch but its not an actual rule with the Walking Football Association. But, we feel it’s a safer to play walking football; so we say the ball isn’t allowed over head height, we play a three-touch rule, no pass-backs if the keeper has thrown the ball to you. The other thing with walking football is that you play on whatever pitch is available, some play on five-a-side, some seven-a-side. Particularly in Spain, you play on whatever pitch is available so therefore the team sizes differ. I’ve got three teams, we play on a five-a-side pitch on a Tuesday, a six-a-side on a Monday and seven-a-side on a Thursday because there’s three different locations and those are the pitches that are available. You do have to mix and match.”

I then wanted to know if there was any form of league going on anywhere, to which he responded…

“In the UK there’s a lot of tournaments and they’ve just started a North and South National league; we’ve recently just come back from playing a tournament in the Algarve and we’re also organising our own tournament for September where a few clubs from the UK are going to come out and play. But, saying that, a lot of clubs won’t play competitive tournaments because they feel it gets too physical, too competitive, too argumentative and it takes away from the ethos of walking football which is about older guys getting together, keeping fit, having a laugh and having a kickabout. What tends to happen in the tournaments is some guys revert back to how they were in their twenties and it can get too competitive.”

Takes away the need for tackling

Speaking of competitive, what’s the rules on tackling?

“It varies. It’s meant to be non-contact, so no tackling from the rear, no tackling from the side, obviously there can be a bit of shoulder-to-shoulder and winning the ball from the front but again, we’re very strict on the non contact element but in the UK in a lot of the tournaments, the issue of physicality comes up which is one of the reasons why we play three-touch. It stops the tackling if you’re playing all touch, you get people dribbling and you’ll get people trying to tackle you to get the ball of you. Whereas you know with three touch that they are going to have to pass it after the third touch so its more about intercepting the ball and it takes away the need for tackling.”

Right, so, it’s essentially passing and moving without the tackling, so would it work for kids?

“I don’t know, we have quite a struggle keeping the over 50s from running so I think it’ll be difficult to keep the kids from running to be honest with you. What we like particularly is the three touch, ‘cos it makes you pass and move quite well, you have to create space because you can’t run or dribble past people, so you have to think about it quite tactically. (You) Can’t run with or without the ball and it’s the most contentious rule because you get people half running and half walking so it can be difficult for the referees and it can lead to arguments. In tournaments, there’s a couple of refs, one to ref the game, one watches for running off the ball.”

“It’s played in 35 different countries and the WFA are planning a European Championships next year and a World Cup in 2020. We’ve got two players who we’ve nominated for the England team, so they’ll go back and have trials in April. There will be two England teams, one for the Over 50’s and one for Over 60’s.”

It did make me wonder, what about the lazy bastards like me who love playing football but hate running. So instead of asking that, I went for the much more subtle, is there anything for the under 50’s?

“Walking football is generally for people over 50, I mean we have someone who’s 36 and also a couple of lads in their forties but for tournaments it does tend to be for the over fifties. You’re also getting a bit of split now where the over sixties don’t want to play with people under sixty because they find them a bit too fast and physical. For instance, our eldest player is 76 and if he’s playing against someone who is 46, there’s a bit of mismatch and the older player can get injured. So it does tend to be over 50’s.”

No World Cup glory for me as of yet it seems. However, I was now in full ‘betting mode’ and wanted to know about the other nationalities. Maybe I could make a living from being a Walking Football tipster…

“Mainly English speaking, quite a few Scandinavians, German, Dutch, so a lot of Northern Europeans and English. In terms of Spanish, there’s a few clubs in Catalonia but most of the Spanish people haven’t heard about it and when you mention it to them, they look at you a bit quizzical. It hasn’t taken off so much in Spain yet but I think it will over the next few years.”

Thoughts on European Championships? (ARE WE GOING TO WIN SOMETHING)

“England is obviously the one with the most clubs so there’s a large pool of players to choose from and it’s going to be played at home so if they don’t win it, it’ll be an embarrassment to be honest with you. I was offered the post of Spain manager but they wanted Spanish people and we don’t have any Spanish players as of yet, so that was a no go.”

A lot of people look forward to the games

You’ve heard it here first, it’ll be an embarrassment when we don’t win the European Championships. Penalty defeat to the Germans, probably… What about the players themselves, how does it help them?

“In terms of benefits to the players it’s really helped them, a lot of them haven’t played for 20-30 years and all thought their footballing days were behind them. So they are really happy and grateful to play football again at a pace they can do at their age. It’s great, they get to play sport again, get the competitive element and they get to stay fit healthy, but one of the biggest things is the social aspect, especially for the older people that can be lonely and find it difficult to meet people, they find themselves having a laugh and having a drink after it. A lot of people look forward to the games.”

That’s Walking Football in a nutshell for you chaps and chapettes, I now wanted to get down to the nitty gritty of his business; how did all that happen?

“When we moved out it was new and emerging. Football is run like a business at every level so I looked at it and thought well, can I run it as a business over here?”

Makes sense, but what makes your company/club stand out?

“It helps because I used to work in the press, so that can help us got a lot publicity which is good for sponsors. We’ve been going eight months and have already signed six sponsors. Looking at Facebook and what have you, most clubs struggle to find a shirt sponsor; some clubs will have sponsors buy them kit for say £200-£300 but we sign sponsors on two year deals for a lot more money than that to cover the kit and the publicity they’re going to get.”

“From a business perspective, we have a lucky location being on the coast of Southern Spain. A lot of older people come out to play golf here so we thought people would come out to play walking football tournaments.”

Right and what does the future hold for your business?

We finished off after that and I had learned a lot about something that I didn’t know existed a week previous, so it was something that I enjoyed doing. In conclusion, I’ve decided that I am going to find a Walking Football Club for the under 50’s and I’ll break into the World Cup squad one way or another. Jules Rimet still gleaming…