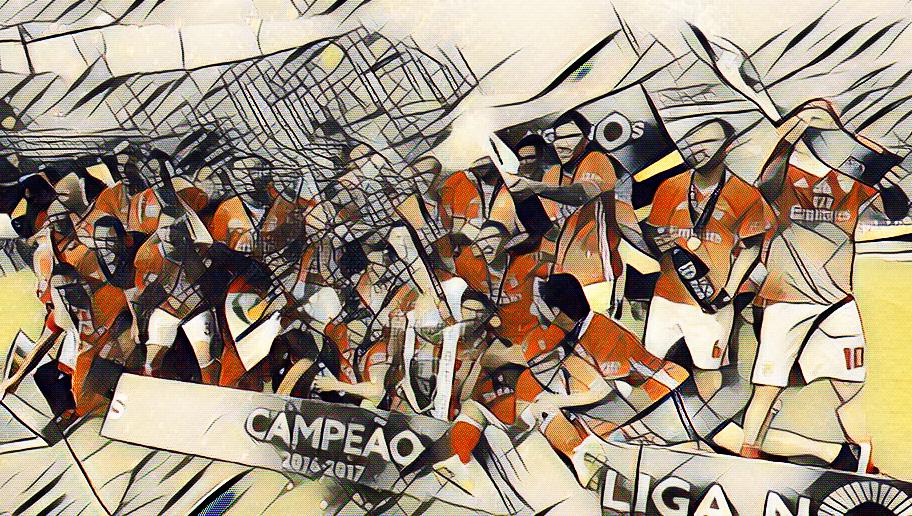 Another week has passed in Portugal and we’ve had all sorts of shenanigans and action going on. There’s been a trophy decided, transfers in and out, and a rather curious opening ceremony as well as another round of league action. Let’s see what happened this week in Portugal:

Liga NOS action took a back seat at the weekend as the Portuguese League Cup took centre stage in Braga. Yes, despite Braga not making it to the final four, the last three matches of the tournament were held in one place across a couple of days.

The semis threw up a Clasico in the form of Sporting taking on league leaders Porto. The match was a generally drab affair with Porto much the better side overall. Sporting did hit the post in normal time through Sebastian Coates but Porto had a goal ruled out for offisde by VAR with Soares deemed to be just off. It was a very tight decision.

The score was 0-0 at full time which meant a penalty shootout immediately afterwards. Yacine Brahimi hit the post at the crucial time for Porto which allowed former Fulham man Bryan Ruiz to stroke the ball past Iker Casillas and send Sporting to the final. The double whammy for Porto is the loss of Danilo Pereira for around the next month or so due to injury.

The other semi final saw struggling Vitoria Setubal take on surprise package of the tournament, second tier Oliveirense. Oliveirense can certainly feel hard done by here, hitting the woodwork twice and being denied time and again by some good goalkeeping as well as missing a penalty. In the end, Vitoria just about survived with a clean sheet and had a huge thanks to owe to Goncalo Pacienca who opened the scoring and set up the second in the 2-0 win.

That set up the final a couple of nights later where Sporting would secure the first trophy of the season but only by the absolute skin of their teeth. They fell behind to the impressive Pacienca inside four minutes and could have been two or three ahead but for some poor finishing. Sporting began to crank up the pressure and they were, quite literally, handed the equaliser by Podstawski. What looked like a phenomenal triple save actually turned out to be a double save and then a Podstawski save. Quite why he did it boggles the mind but he did, VAR caught him and Bas Dost sent the tie into penalties. Poor Podstawski would crack the crossbar at the crucial moment from the spot which allowed William Carvalho, with a slip and all, to slot home and secure another League Cup for Sporting.

The drama wasn’t the only real talking point coming from Portugal’s League Cup final. No, the opening ceremony garnered some attention too if, for nothing else, being really f**king weird.

Imagine if you will that it’s fancy dress at school and you and your pals decide to go as Mario Kart together. You divvy up the roles and all your mates are the obstacles you get on the courses. Of course, their parents aren’t very arty and, well, produce this:

How do you celebrate a League Cup final? With men in cardboard suits, of course pic.twitter.com/XdZc9Gmqlm

You’ve drawn Mario, mostly because you get that sweet toy motorbike that you can drive. Your dad is well keen for it and builds a roof for it and even gives you a compartment to take your football too:

how did the ball arrive, you ask? pic.twitter.com/lTt9Q5NJ11

If this is the kind of tripe FA’s are spending their money on, I might see if I can become their official opening ceremony organiser.

It’s been relatively quiet on the transfer front in Portugal too with the most activity heading out of the country. Porto have agreed to let full back Miguel Layun go to Seville though the Mexican’s seeming change of heart has seen him reject Real Betis and sign for Sevilla which will, of course, make him Mr. Popularity.

Sporting let winger Iuri Medeiros go on loan to Italian side Genoa for 18 months with an option to buy while Gabigol has ended his loan at Benfica and been packed off back to Santos.

There’s talks swirling too that Benfica’s Alex Grimaldo was set for a big money move to Napoli at the end of the season with the deal being agreed now while Seydou Doumbia could have been exiting Sporting.

There were other moves made on Deadline Day as well (did you like that smooth transition hiding the fact that this has been written over a few days): Rafa Soares ended his loan at Fulham early to go back to Porto to then go on loan to Portimonense; Nathan of Chelsea joined Belenenses; Sporting’s Jonathan Silva went to Roma following Emerson’s departure to Chelsea while Braga unveiled Diogo Figuerias with a bit of pizzazz:

?? Braga have signed Diogo Figueiras on a 4-and-a-half year deal.

? This is some announcement video! pic.twitter.com/bEpvSMg6B1

The big news for me though is the return to Porto for the aforementioned Pacienca. With the Dragons having already brought in Majeed Waris to supplement Soares, Aboubakar and Marega, it seems that Pacienca is taking a huge risk heading back after really getting into a groove with Setubal. Here’s hoping this isn’t the case…

It’s not been a fun week over at Benfica. Monday night saw them miss the chance to go top of the table after they could only draw 1-1 at Belenenses. Jonas’ rather tame penalty miss and a host of missed chances made you feel like it was going to be, to bust out a cliche, one of those days and that feeling intensified with Nathan’s goal with five minutes to go. But, after an extraordinary amount of added time, Jonas pelted in a free kick to give Benfica a point but a disappointing one at best.

It’s also not been a good week either for Benfica’s PR either. The finance ministry was raided last Friday by police as Mario Centeno, Portuguese finance minister and head of the Eurogroup of euro zone finance ministers, over an alleged request for tickets to Benfica-Porto last year as well as Benfica president Luis Filipe Vieira allegedly using those to get his son a tax break for a house.

And that’s not all.

Vieira and vice president Fernando Tavares have just been named as formal suspects in a corruption case by the prosecutor general alongside a high ranking judge and other higher ups in Portugal. Without getting into too much jargon, the case doesn’t have anything to do with Benfica’s dealings but were Vieira and Tavares to be found guilty then it would certainly throw the club into some form of turmoil. Add in the fact that this case is an extension of a case against a former Benfica director, Jose Veiga, and you can expect this story to rumble on for a while.

Not content with denying Porto once this week, VAR struck again to deny the former league leaders a dramatic win in Moreirense. Majeed Waris thought he was the hero but was deemed to be offside by VAR. Not that Moreirense keeper Jhontan knew because he was cold cocked and knocked silly by Waris scoring. Sergio Conceicao was not a happy manager to say the least and, combined with Sporting’s sluggish win over Vitoria Guimaraes, Porto are down to second again.

Goals Galore Outside the Big Three

The other six fixtures brought about 19 goals and plenty of changes at the foot of the table. Estoril’s surprising 3-0 win over Tondela lifted them off the foot of the table while Setubal got out of the relegation zone with a 2-2 draw at Chaves. Spare a thought for poor Aves who lost 2-0 at Braga and now prop up the top tier. That’s now 1 point in their last six games and with less than half a season to go, they need to arrest that slide quickly.

Team of the Week

Portimonense – While Sporting went top of the table and won the League Cup, they weren’t very good in any of their three games. Portimonense, however, took apart the impressive Rio Ave 4-1 at home with some brilliant attacking football. They’re a wonderful team to watch as they really go for it and if they can tighten up a little at the back then they will be OK.

Player of the Week

Fabricio (Portimonense) – A hat trick against Rio Ave and a well deserved one too.

Just the small matter of Porto against Braga as next week’s big game. That should be good.