Skip to content
1 Comment on What can England hope for with Stuart Pearce in charge?Posted in International, Youth By By Far The Greatest TeamPosted on August 28, 2012July 25, 2014Tagged England, Stuart Pearce 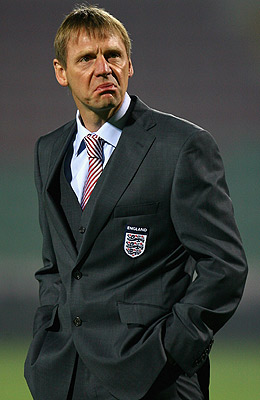 As the new England U21 campaign begins next month it will bring questions about what direction England are heading towards and whether there is even a plan at all.

“Continuity is vital as we continue to build our club ethos, and Stuart [Pearce] is an important member of the England coaching structure. I know he was as disappointed as anyone at the Under-21s‘ most recent tournament results at the European Championships in Denmark, but we mustn’t forget the team had an excellent qualifying campaign and continues to produce young players ready and prepared for senior team experience.”

This announcement was certainly an interesting one from the newly appointed chairman.

What Are the Expectations?

Firstly, it seems bizarre to define the qualifying campaign as ‘excellent’. It simply wasn’t. Many games were terrible in performance, team selection, team approach and non-existent plans. The home game against Greece in 2011 was one of the worst England games I have seen at any level (which says a lot). Wilshere played out wide all game and barely touched the ball, and the game seemed to be one continuous long ball from Micah Richards towards Andy Carroll over and over. If this was only one poor display it could be ignored but it was an error strewn mess of a campaign – continuously. England are simply not good enough, whether it’s U21 or the senior national team.

It is always a hard task to figure out what The FA actually expects from the coach of the U21 role. Bernstein mentions that Pearce ‘continues to produce young players ready and prepared for senior team experience.’ ­but I, for one, have never understood this point. If you are the U21 coach you are always going to bring through players regardless of how badly you do it. The way your team plays and where players play in your team doesn’t seem to matter. So is that all that is expected from an U21 coach? To pick a team and let them get on with it?

The ‘English’ Style at U21 Level

Stuart Pearce has never mentioned specifically how his team should play or how he wants them to play. The only plan or aim he has mentioned is the need to win youth tournaments to then have success at senior level. But this has no logic if you then evidently have no actual footballing philosophy that will prove worthwhile at senior level. What confused things more was that Pearce then backed off from this claim of needing to win tournaments when the team began to fail to win the group games against Spain and Ukraine respectively.

The direction and style of the team has been very basic during the past two tournaments. Pearce has deployed two defensive midfielders to do nothing more than protect the defence and mainly pass sideways, mainly relying on quick counter attacking and set pieces for goals. The idea of a safety first approach mainly aimed at wider players creating. Numerous games have involved players being isolated for large periods.

The idea that this is the approach that we must continuously use with an obsession on winning the U21 tournament regardless has not got the team anywhere. Why can the team not play to be creative, with vision and work on possession? Work on movement off the ball which has been largely non-existent for such long spells in so many games? It’s very hard to figure out what the approach actually is most of the time and the rumours that numerous club coaches are bemused by the approach at this level exemplifies the issue.

U21 level should be the pinnacle of youth international football for the nation to look at for an example of how to play. Spain won the most recent tournament playing with their own style and philosophy just as the Germans did two years before. But we remain playing in a style with a demand to win that I don’t even believe has any benefit to our individual players or for their development if they actually do get promoted to senior level in the future.

The Question That Begs

With hard to decipher approach and aim at U21 level, it remains another campaign with quite a few talented players preparing to step up but no real idea of where we are going. What we are actually planning for?