Skip to content
9 Comments on When did Chelsea and Manchester City’s money deny Liverpool?Posted in Premier League By By Far The Greatest TeamPosted on October 4, 2012July 10, 2017Tagged Chelsea, Liverpool, Manchester City, Steven Gerrard 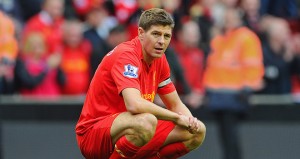 Liverpool captain, Steven Gerrard, famously handed in two transfer requests in a bid to leave his boyhood club for Chelsea. Both times he changed his mind and signed a new and improved deal, rewarded for his “loyalty”, and will now almost certainly see out his career in Merseyside.

Whilst the 32-year-old has won lots of silverware over the years at Liverpool, including two FA Cups, three League Cups and the Champions League, the Premier League title has eluded him. For years Gerrard used to start the season positively, claiming this would be the year that Liverpool would get to experience the glory days again, but this never came in to fruition.

July 10th 2005: “Hopefully I can go on and win that medal that I’m craving for, which is the Premiership, because that’s the one I’m missing. Hopefully it will be this year, but if not it will happen in the four years that I’ve signed for.”

July 25th 2006: “We are looking forward to the new season, it is exciting times for Liverpool. We are coming back to Liverpool on the back of the FA Cup win and hopefully we can deliver the Premiership title.”

November 12th 2007: “Other people are writing us off, but we are certainly not. We don’t mind it. As a football team being written off sometimes brings the best out of you. We’re just taking each game as it comes. We are on the same points as Chelsea and everyone is saying that they are coming back strongly and can win the league, so why can’t we?”

May 17th 2009: “Sometimes you just have to go for it and take big risks to win the kind of games that we have drawn. But we’ve learned a lot and I think next year could be our year – I’m really confident about that.”

May 21st 2009: “This season is the first time I’ve ever been involved in a title race and, from a personal point of view, I’ve certainly enjoyed it. Obviously we were unfortunate not to win the league, but we can take a lot of positives from this season moving forward. We can take belief from going to Old Trafford, Stamford Bridge and the Emirates and remaining unbeaten. If we can take that confidence and belief into those games next season and perform in the same way, as well as turning the home draws into wins, I think we could be champions.”

June 18th 2011: “If we were to get back in the top-four next season I think it would be a fantastic achievement. But we will be setting out to win the league, because that’s what you do year in and year out at Liverpool.”

In his new autobiography, My Liverpool Story, Gerrard has finally conceded that it would take a “miracle” for him to win the Premier League before the end of his career. However, there is still one fairly outlandish claim in the book, with Gerrard believing that if Roman Abramovich and Sheikh Mansour hadn’t bought Chelsea and Manchester City, he would have won two or three league titles.

“It is no good us worrying about the power of Chelsea and Manchester City. But there is no two ways about it, if there was no Roman Abramovich or the guy who bought Manchester City I’d have two or three league titles sitting here now. People who buy football clubs can have too much power for other clubs in the league and that is what has happened. We can’t compete financially so we need to worry about ourselves and be the best we can be and see where we end up.”

Considering Liverpool haven’t finished behind Chelsea or City as champions even once during Abramovich or Mansour’s reign, it’s strange for Gerrard to believe he could have won two or three titles if not for their ownership. If anything, Abramovich’s take over at Chelsea presented Gerrard with his best chance of winning a Premier League medal, but he turned it down. Back to the drawing board, Stevie.